The population on the banks of the River Niger downstream from Gao is extremely diverse. From northern Mali to the Kainji dam in Nigeria, languages from three language phyla are spoken in a bewildering number of ethnic groups. How did this come to be? While historical sources point at early empires (Kawkaw, Kanem-Bornu, Songhai, Hausa, Oyo), oral traditions speak of migration, and the known archaeological sites have evidence of trade, the cultural dynamics and population history along the lower middle Niger remain underexplored. Yet from the available evidence, we can fully expect this region to have been of central importance to the political and economic history of large parts of West Africa. The Niger, we argue, functioned as a corridor of exchange of all forms, linking the Saharan fringes to the tropical forests, and enabling interactive cultural processes that continuously led to new languages, new identities, and new material expressions. Over the centuries, this has led to the complex ethnolinguistic situation we observe there today.In this project, we will explore the mechanisms and details of this cultural contact along the Niger between 800 and 1500 CE. We approach these questions from a joint perspective of historical linguistics and archaeology, applying a dynamic network approach to create a network model of regional interaction. Our use of recent advances in loan word research and their connection to archaeological data means that this project pioneers a new form of co-operative research between historical linguistics and archaeology in Africa.

Frobenius-Institute for Research in Cultural Anthropology

Visit the blog of project 9 and find
First-hand information

Wavy Line and Herringbone On 14.07.2020, the ceramic specialists from the priority programme “Entangled Africa” once again met virtually to... 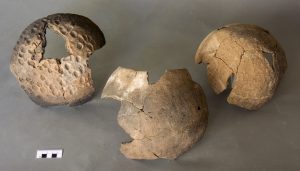 After a successful meeting at the beginning of the month, the ceramic specialists of the “SPP Entangled Africa” met again...

During the last months, the archaeological sector has shown itself to be at its most flexible.The effects of the Corona...