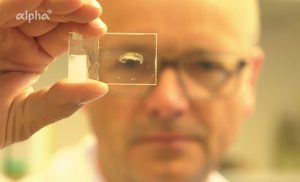 Archaeologists have made a remarkable find in a 12,000-year-old stone temple in southeastern Turkey. Among tens of thousands of animal bones and a statue that may depict a kneeling figure holding a human head, researchers have uncovered the remains of human skulls that were stripped of their flesh and carved with deep, straight grooves running front to back. More

This Mysterious Stone Structure Is Older Than Stonehenge (Audio: EN)

From the Series: Secrets: Garden of Eden

Until recently, Britain’s Stonehenge was thought to be the world’s oldest set of stone monuments. But a recent discovery in the Turkish region of Gobekli Tepe has been estimated to be over 6,000 years older.

How to investigate death?

This inevitable question is discussed in a conversation between
Dr. Kerstin P. Hofmann and
Dr. Julia Gresky.

The interview about „Thanatoarchaeology“ is available in the new issue of
Archaeology Worldwide 1-2021.

German researchers have discovered the oldest known case of osteopetrosis or “stone bone” disease in the remains of a man from the Neolithic lacustrine settlement of Maliq in southeast Albania. Osteopetrosis is a rare disorder which manifests through the hardening and solidifying of bones, making them more susceptible to fracture. – Read the article

For decades, researchers have been unearthing odd human bones that are twisted, too long or too short, or studded with protruding growth. They’re a sign that someone in the past suffered from a rare disease such as dwarfism. But few scientists have studied these cases or what they reveal about ancient societies. At an unusual, interdisciplinary workshop in Berlin, however, researchers presented case after case that challenge the common notion that life in the past was nasty, brutish, and short. In a line of research called the bioarchaeology of care, scientists are finding that people with rare diseases often enjoyed the support of their societies, survived well into adulthood, and were buried with their communities, not as marginalized outsiders. In some cases, „disease“ may not be the right descriptor, because ancient societies may have revered conditions we now consider disability. Ancient Egyptians honoured people with dwarfism, for example, and even cleft palate, considered a deformity today, may have been respected in the past. – Read the article

People with deformities and rare diseases were not always mistreated in the past. In several ancient societies, such individuals appear to have been given social support and special care. – Read the article

Why our ancestors drilled holes in each other's skulls

Thousands of years ago, people were performing a form of surgery called „trepanation“ that involves boring holes through a person’s skull. – Read the article

The Stone Age ritual site at Göbekli Tepe in Southeast Turkey has intrigued scientists for more than two decades. The monumental structures, which were first erected here some 11.000 years ago, feature fabulous animal depictions in low and high relief, as well as representations of humans, one of which is missing its head. These images testify, among other things, to a clear ritual function of the buildings. The intentionally modified fragments of three human skulls, which were discovered in close association with the edifices, are strongly suggestive of a new and previously unknown type of mortuary cult at this time. – Read the article

Three carved skull fragments uncovered at Göbekli Tepe, a Neolithic site in southeast Turkey known for its impressive megalithic architecture with characteristic T-shaped pillars, feature modifications not seen before among human remains of the time. The finds could indicate a new, previously undocumented variation of ‘skull cult’ in the Early Neolithic of Anatolia and the Levant. – Read the article

RITUAL CUT  An almost 6,000-year-old human skull from southern Russia contains a large opening at the back of the head created by cutting away bone with a sharp instrument. Researchers suspect many skull surgeries in southern Russia at that time were performed for ritual, not medical, reasons. (J. Gresky) – Read the article

Why our ancestors drilled holes in each other's skulls

Thousands of years ago, people were performing a form of surgery called „trepanation“ that involves boring holes through a person’s skull.

For a large part of human prehistory, people around the world practised trepanation: a crude surgical procedure that involves forming a hole in the skull of a living person by either drilling, cutting or scraping away layers of bone with a sharp implement. –Read the article