23rd September – only two days left and Nina, Roman and me will head for a new survey campaign in South Scotland (and Northern Ireland). A good time to recap the work we did last year in our gradiometer prospections in Burnswark, Birrens, Ladyward and Middleby (all Dumfriesshire). Last year it was just Nina Dworschak who joint me, doing all the foot-work with the 5-sensor gradiometer cart of the Römisch-Germanische Kommission (RGK). Our works would not have been possible without the support from John and Don Reid and Robin Edwins from the Trimontium Trust Melrose. 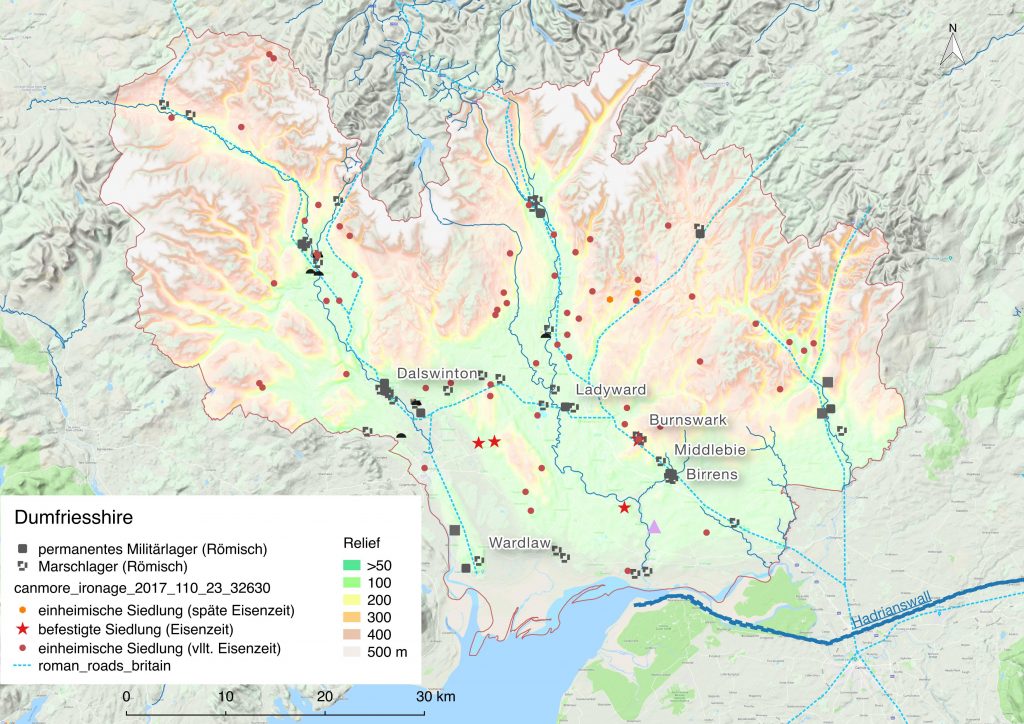 At Burnswark we managed to survey large areas of the interior of both Roman marching camps north and south of the Iron Age hillfort on top of the tabular eminence of the hill. Overall, both camps did not show discernible permanent interior structures, that would suggest extended use of the camp. The South Camp, though, holds the compositions of the so-called ‚fortlet‘ (we prefer to call it ‚rectilinear enclosure‘) in the south-east and of a ’scooped settlement‘ in the West. Both are readily discernible in the surface morphology, their ditch rampart enclosures and hut bases raise visibly above the overall ground. It was difficult to survey these areas with the cart, several times we chose to carry it to overcome the slopes of rampart and ditches and not to harm the monument. Though the results are slightly more bumpy than those on the smoother grounds, we can clearly see several pits and structures. Moreover, east of the South Camp, we found several anomalies, which would need further attention. 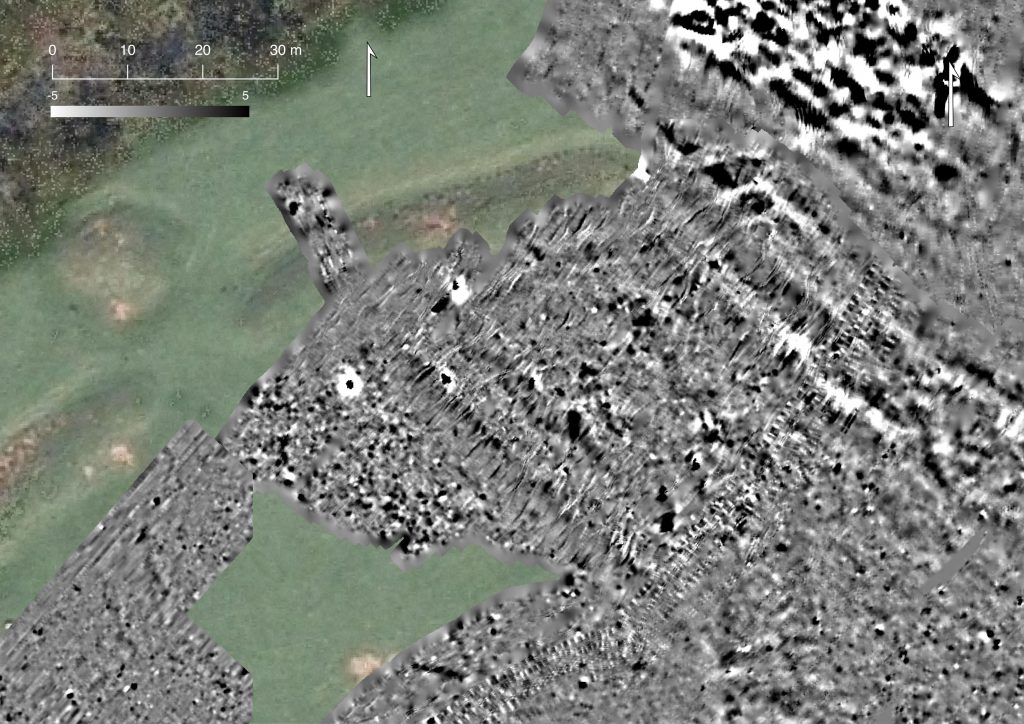 At Birrens we worked in the surroundings of a Roman fort. We tried to identify the layout of the Roman road. Unfortunately, the field north of the fort was rigorously drained in modern times. All the previous structures are mixed, and the road vanishes immediately outside the fort. We proposed two slightly different directions of the road trace, mainly due to the orientation of other structures. North of the annexe (West of the fort) we detected a set of parcels, that could be interpreted as field boundaries.

Nevertheless, they are interspersed by highly susceptible anomalies – that could be interpreted as hearths or furnaces. Overall, more than 30 of these anomalies were identified. The parcels seem to be oriented to the defence ditches of the annexe. If they turn out to be contemporary to the activities inside the fort, both, the farming activities, as well as the production sites, would represent extroversion around the important military base of Blatobulgium (Birrens). 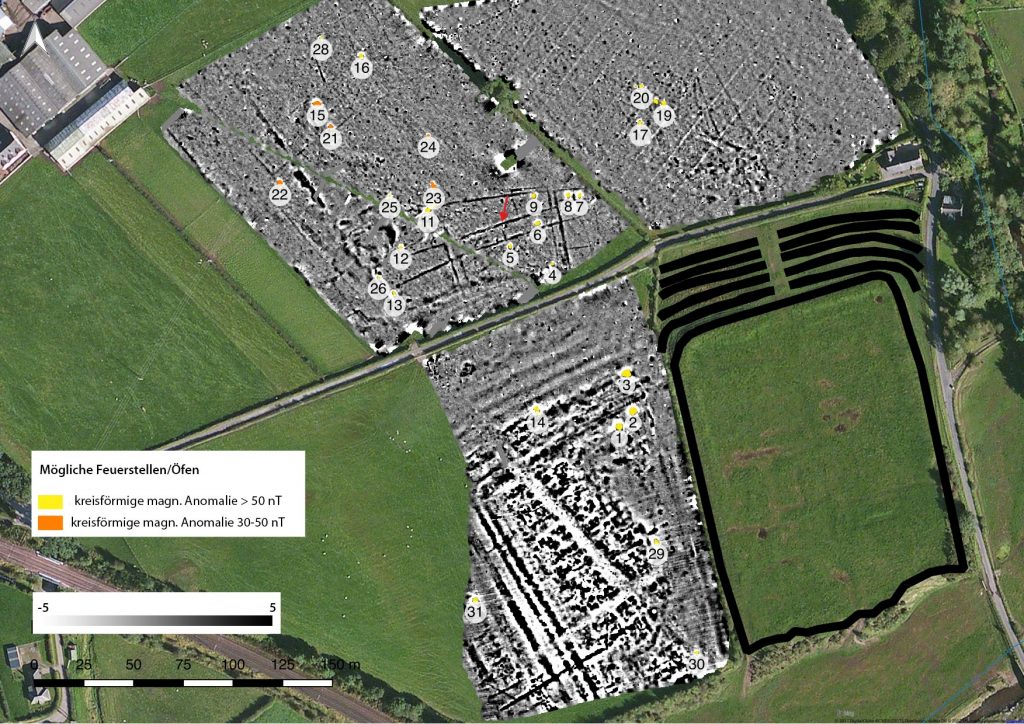 Ladyward, a Roman fort about 7 km North-Northwest of Birrens, was the next on our list. The previous gradiometer worked in 2015 had already revealed striking inner structures of the fort. But part of the fort was under corn that year, so the 2017 campaign aimed to complete the previous work. The proceeding destruction of the monument was already documented in 2015: only half of the fort is existent on the plain above the Dryfe river, the other half has already eroded due to the rivers activities. The new research revealed that also the defence work of the fort on the Southern slope is gradually eroding. 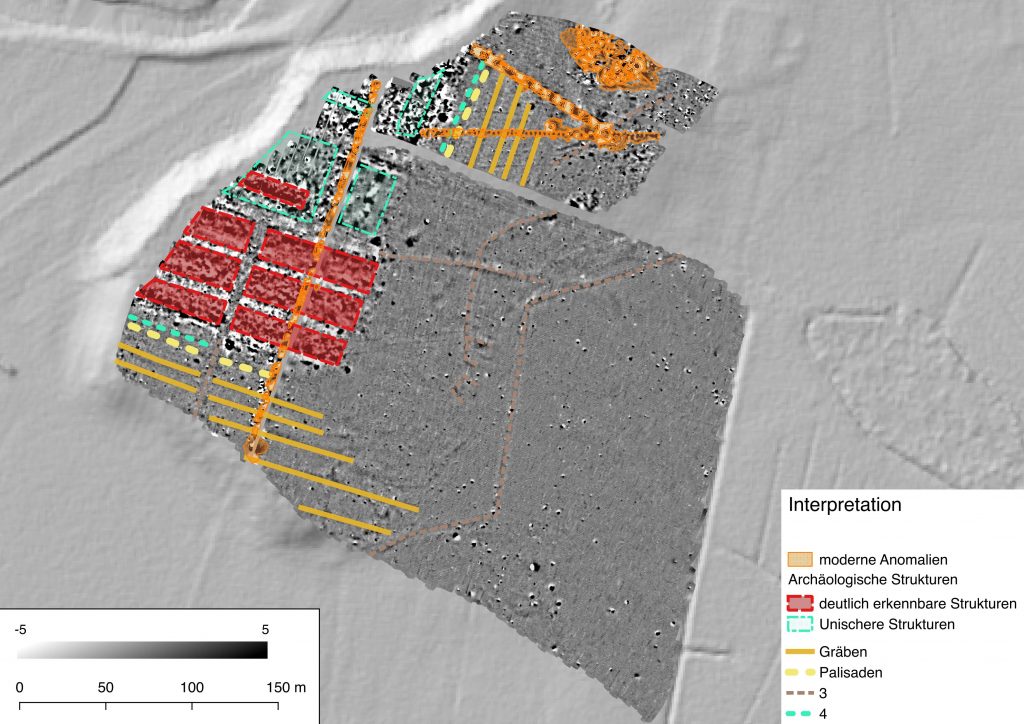 A further site we surveyed was Middlebie, were fieldwork suggested a density of metalwork. Apart from a lightning strike (the star-shaped anomaly in the centre North), the survey revealed several anomalies, that can be interpreted as pits. But no more complex structures could be detected. We hoped to find the trace of the Roman road, but there is no clear evidence of it in this field. There might be a vague linear anomaly on the North-Eastern edge of the survey image, though.  More research is necessary to further investigate the structure. 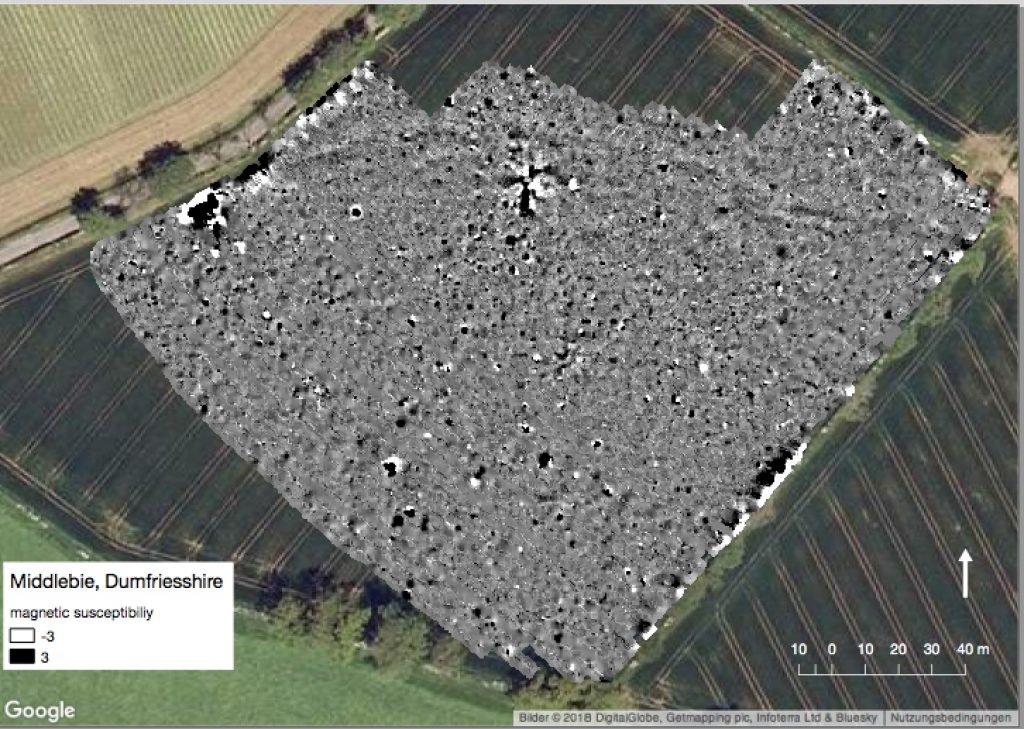 The survey of 2017 brought to light several new aspects – in particular about the Roman occupation of the area. As the results at Birrens show, the Roman engagement in the region was not restricted to purely military activities. They involved in the production of supplies as can be seen in the farming and further production. At Burnswark, though, the Roman actions might not have been long-lasting. The camps do not show an intensive occupation. These results confirm the potential of the site and are a promising foundation for further works.

This website uses cookies to improve your experience while you navigate through the website. Out of these, the cookies that are categorized as necessary are stored on your browser as they are essential for the working of basic functionalities of the website. We also use third-party cookies that help us analyze and understand how you use this website. These cookies will be stored in your browser only with your consent. You also have the option to opt-out of these cookies. But opting out of some of these cookies may affect your browsing experience.
Necessary immer aktiv