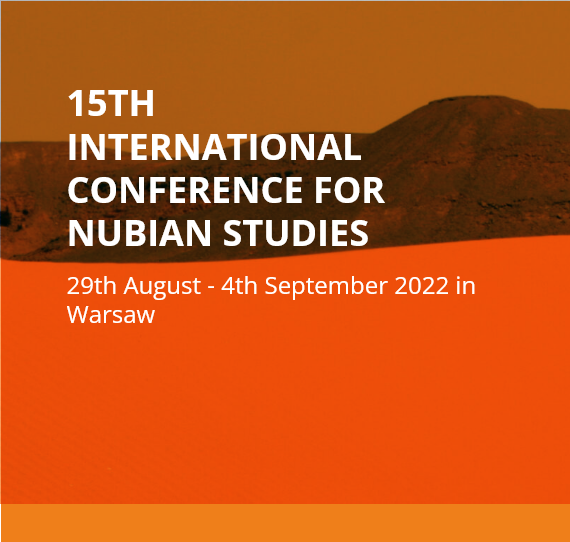 From the ranks of the SPP “Entangled Africa” Jana Eger-Karberg (Project 03, InterLINK) invites together with Tim Karberg (DFG-Project Wadi Abu Dom Investigations) for a panel at the 15th International Conference for Nubian Studies. The aim of the panel will be to discuss recent research on Western Sudan.

The International Conference for Nubian Studies was organized for the first time in 1972 by Prof. Kazimierz Michałowski at the University of Warsaw. Next year, just in time for its 50th anniversary, the 15th edition of this conference gives credit to the continued interest on the topic. An international scientific audience of Nubiologists, Egyptologists, archaeologists, ancient historians and others interested will meet in Warsaw between August 29 and September 4, 2022, to present and discuss the latest research results concerning Nubia.

As of today, the program consists of over 20 individual panels. These include general aspects with a wide range of emphases, as well as issues related to specific areas of research. Thematically, there are many overlaps with the research approaches of the SPP “Entangled Africa”. Under the title “Western Sudan – a frontier and contact zone between Nubia and Sub-Saharan Africa” the panel by our “Entangled Africa” researcher Jana Eger-Karberg and her colleague Tim Karberg aims to draw attention to an area within today’s Sudanese borders, the history and archaeology of which are still little known:

“After being in the shadow of the Nile valley and its immediate hinterlands for long, the western Sudanese region of Kordofan found rapidly increasing interest in archaeological research in the past two decades. French, Polish, Sudanese, and (recently) German missions started working at different sites. In Darfur, nevertheless, comparable research was hindered by the general circumstances even longer, and has just recently (re-)established.
The initiators of this session head a large-scale archaeological survey project in Northern Kordofan, cooperating closely with several other missions which have already worked in Western Sudan or are interested in promoting our archaeological knowledge of this region. After some years of intensive research, it became clear that Kordofan and Darfur played a major role as a frontier and contact zone between the Nile valley based Nubian states, and the neighbouring cultural complexes of Sub-Saharan Africa along the southern fringe of the Sahel belt. Therefore, intensifying research in these regions might contribute significantly to our understanding of Nubia not only as a riverine culture oriented along a North-South communication corridor, but also as an integral part of the late antique and medieval East-Western chain of Sudanic states and cultures south of the Sahara.
For all these Sudanic cultures, close interconnectivity between sedentary agricultural and mobile pastoral economic concepts played a major role. For understanding the socio-economic development of Kordofan and Darfur, research on these topics and their palaeo-ecological background is crucial.
We plan in this session to bring together researchers from the above-mentioned projects to discuss the recent results and state of research on Western Sudan, as well as to attract other scholars to contribute to its investigation in future.
(Abstract from the website)”

Scientists whose research overlaps with the topics of the panel or who are planning to conduct research in this direction are welcome to contact the initiators with their own presentation proposal. You will find the contact details on the project pages linked above.

A previous registration on the conference website is mandatory both for those interested in presenting papers and for all other participants.