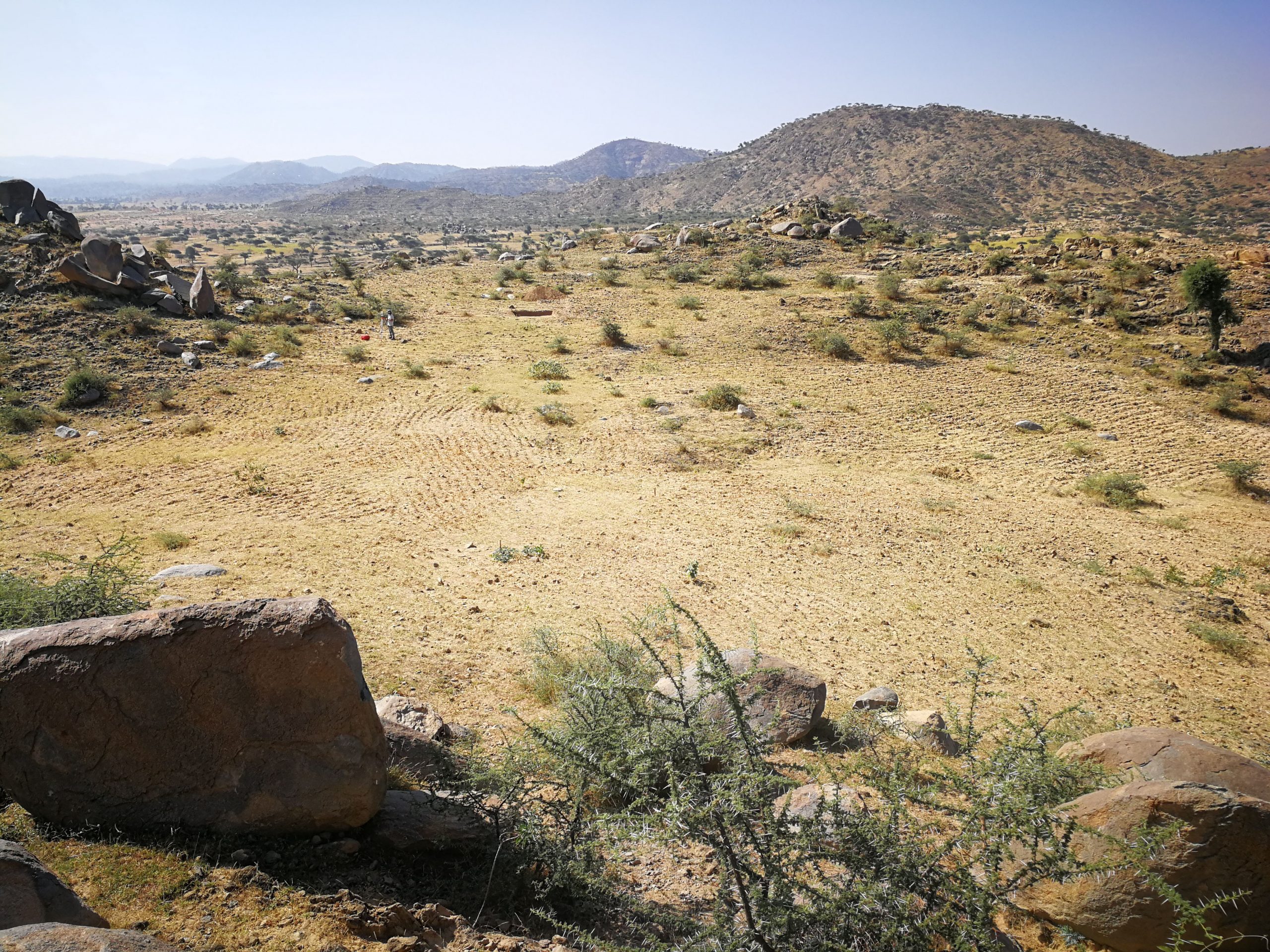 The interdisciplinary research project aims to investigate inner-African contacts between the northern Horn of Africa, the Middle Nile, the northeast Sudanese Gash delta and parts of Egypt. The Rama Valley, located in the Ethiopian-Eritrean border region, is the focus of the research question, as it has the potential of a supra-regional contact corridor between the Ethiopian highlands and the Gash delta and the Sudanese lowlands.

In autumn 2019, field work in the Rama Valley was continued, with research focusing on archaeological-geographical surveys and a test sounding. The site S40 is located westwards of the city of Rama on a c. 50 by 50 m large plateau that is partly used for agriculture (Fig. 1). Numerous pottery finds of rim and body sherds with incised and impressed decorations found on the surface during the 2018 survey suggest connections to the Sudanese lowlands, where these types of decorations were found dating between the 4th and 1st millennium BCE.

This finding was followed by means of a 3 by 3 m large and 1.70 m deep sounding. The sounding yielded different soil and sedimentary deposits, which were mixed with decorated and undecorated pottery sherds throughout the excavated depth, whereas architectural structures were not found. The dating of the pottery sherds as well as the evaluation of the micromorphological samples from the sections are currently in progress.

The survey was continued according to topographical aspects and on the basis of remote sensing data in different areas south of the city of Rama and yielded more than 100 new archaeological sites of different time periods. Besides some obsidian chips and fragments of two clay animal figures (Fig. 2) the survey revealed pottery sherds with different find densities. The majority of the sites showed only very few sherds. So far, only sub-recent settlement remains have been detected. According to the current state of research, the Rama Valley seems to have been used as pasture and farm land rather than as a settlement area, as is still the case today.

The geographically oriented part of the survey concentrated on field mapping of erosion landforms that occur mainly in the form of gullies (Fig. 3). Gullies are linear forms of erosion caused by concentrated surface runoff, usually triggered by human activity. Especially the connection of gullies and paths were of interest, because paths can trigger linear surface erosion. The latter can therefore make it possible to find and reconstruct ancient path systems. Another focus was the mapping of hollow ways – paths that have been used over long periods of time, in some cases until today, and have thus been eroded into the sediment. The research on these pathways is supported by the application of different scientific analysis methods for dating issues and is still in progress.