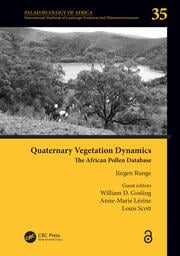 High mountains are sensitive to climate change. Holocene lake remnants witness to the last Saharan Humid Period (SHP) in the Tibesti, the highest mountains of the Sahara (>3000 m asl). The impact of Holocene climatic change on the terrestrial montane ecosystems, however, is largely unknown. Palynological investigations on a palaeolake sequence from the summit caldera of the Emi Koussi, the highest volcanic complex of the Central Sahara, were performed to address this issue. Based on charred plant particle concentrations, the age depth model indicates a Holocene age of the palaeolake (c. 9500-5500 cal yr BP). Shifts in the vegetation composition indicate altered climatic conditions: high proportions of Poaceae and fern as well as highly fluctuating Artemisia frequencies characterize the SHP, strongly dominating Ephedra distachya-type proportions reflect the present vegetation, evidencing distinctly decreased humidity. The missing mass expansion of tropical tree taxa into the summit zone meanwhile points to persisting low temperatures during the Holocene. The absence of Mediterranean tree taxa during the SHP indicates that migration from the Mediterranean to the southern Sahara was not possible. Hence, a survival of Mediterranean tree taxa within micro-refugia may also be excluded. An exception is Erica (arborea) which expanded only during the Middle Holocene, relying on relict populations. Increased precipitation at persisting lower temperatures thus shaped the 28high altitudinal ecosystems during the SHP, triggering modifications in the vegetation composition. The ecosystem type itself, a montane steppe, remained. This is in clear contrast to the contemporaneous marked biome changes in the surrounding Saharan plains.