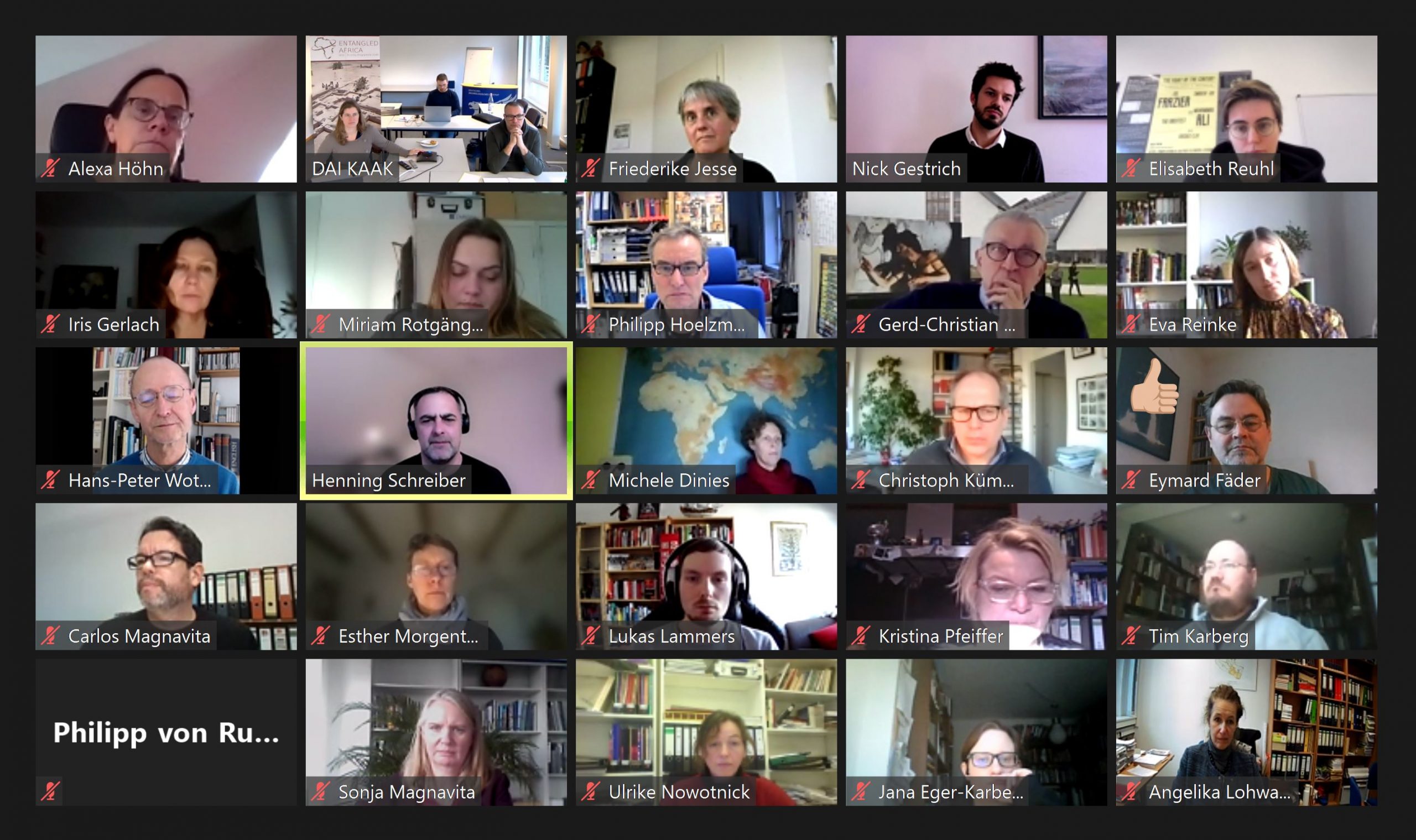 The goal of the Priority Program (SPP) “Entangled Africa” is to explore inner-African relations and connections of the last 6,000 years. Not only on the project level is work being done to achieve this goal, but also beyond the project boundaries. Eight “Working Groups” (WG) have so far formed the basis for linking the research of the Entangled Africa projects and for creating images of a entangled Africa through time. In the now well-established format of a virtual meeting, the course was set for the second funding phase beginning in 2022 at the program’s fourth plenary meeting on Jan. 10, 2022. We are particularly pleased that this meeting was also attended by Dr. Christoph Kümmel as a representative of the DFG, as well as international colleagues and those interested in the program.

As in the previous year, 2021 was also marked by successes and unfortunately also limitations in the Entangled Africa projects. Despite the ongoing pandemic and political instabilities in some of the regions of Africa in which the research is focused, exciting results were again achieved and progress was made. Most importantly, the objectives of some of the Working Groups formally established in early 2021 were once again sharpened. For example, a focus on food production systems and culinary practices in sub-Saharan savannah emerged as a common goal among the projects of the Savannah Economy WG. A definition for the terms “Savannah Economy” and “Oasis economy” that is useful and relevant for the SPP Entangled Africa will have to be found.

An important basis for life is water, a raw material that also plays a central role in other Working Groups. For example, the WG “River Systems” is concerned with some of Africa’s major river systems, the Nile, Congo, Niger and Senegal, and their functions as connecting and dividing elements in the lives of the people of the past. Groundwater and wells as well as rainwater reservoirs, such as the so-called Hafire, for supplying larger towns and the surrounding countryside are essential parts of the exchange networks in and around the largest arid desert on earth.They are among the topics of the work of the WG “Link Kordofan”, in which the connecting elements between the Middle Nile Valley and the western regions are being examined.

Finally, the work in the working groups illustrates the great importance of orderly data collection including the associated research data management. The methodological Working Groups of the SPP focus on this aspect. Within the WG “Pottery“, proposals for an Africa-wide recording of pottery data have been developed and will be published soon. Botanical data are being collected and harmonized for feed into Noetoma and ArboDat 2018 in the WG “Data collection natural sciences“. For analysis of data in SPP and Working Groups, the WG “Network Analysis” serves as a focal point for those involved in statistical representation of data on networks.

And eventually, the work of the WG “Data integration” aims at incorporating research data such as images but also chronological phases into the web services of the German Archaeological Institute (DAI). In close cooperation with colleagues from the scientific information technology department in Berlin, work is underway to further refine these systems. At the end of the funding phase of the SPP, the new data fed in via Entangled Africa will be queried across continents with a special application, the “Entangled Africa Data Explorer“.

An exciting contribution, resulting from the work on the web service iDAI.chronontology, came from the ranks of the young scientists of the SPP. Following on from the question that arose during the work process of how the role of women rulers can be better reflected in Egyptian chronology, a general approach is to be developed that can help to highlight the visibility of women in archaeological and historical data. In order to better coordinate cross-project research on this topic, a new WG will be established. Its number thus grows by one to now nine: a thoroughly gratifying result for the entangled research of the SPP.

At the end of the meeting, the concept for the German-African traveling exhibition to be opened in 2024 under the working title “Planet Africa” was presented to all members of the SPP for the first time. This exhibition will significantly incorporate the scientific findings of the SPP and will be made accessible to the interested public in Germany and Africa in a novel way. The concept includes a variety of digital media products and a large scope of content, which can be filled by the respective exhibition sites/countries with their own site-specific content. The framework is formed by six variable modules that describe Africa from different archaeological perspectives – from its unique landscape to the evolution of humankind to the continent-spanning networks of ancient cultures.

The unifying element of these modules are illustrations of the archaeological findings created by African artists. These also shape the guiding color scheme of each module. This combination of knowledge about the past and artistic interpretation from the present gives the exhibition concept a unique authenticity.