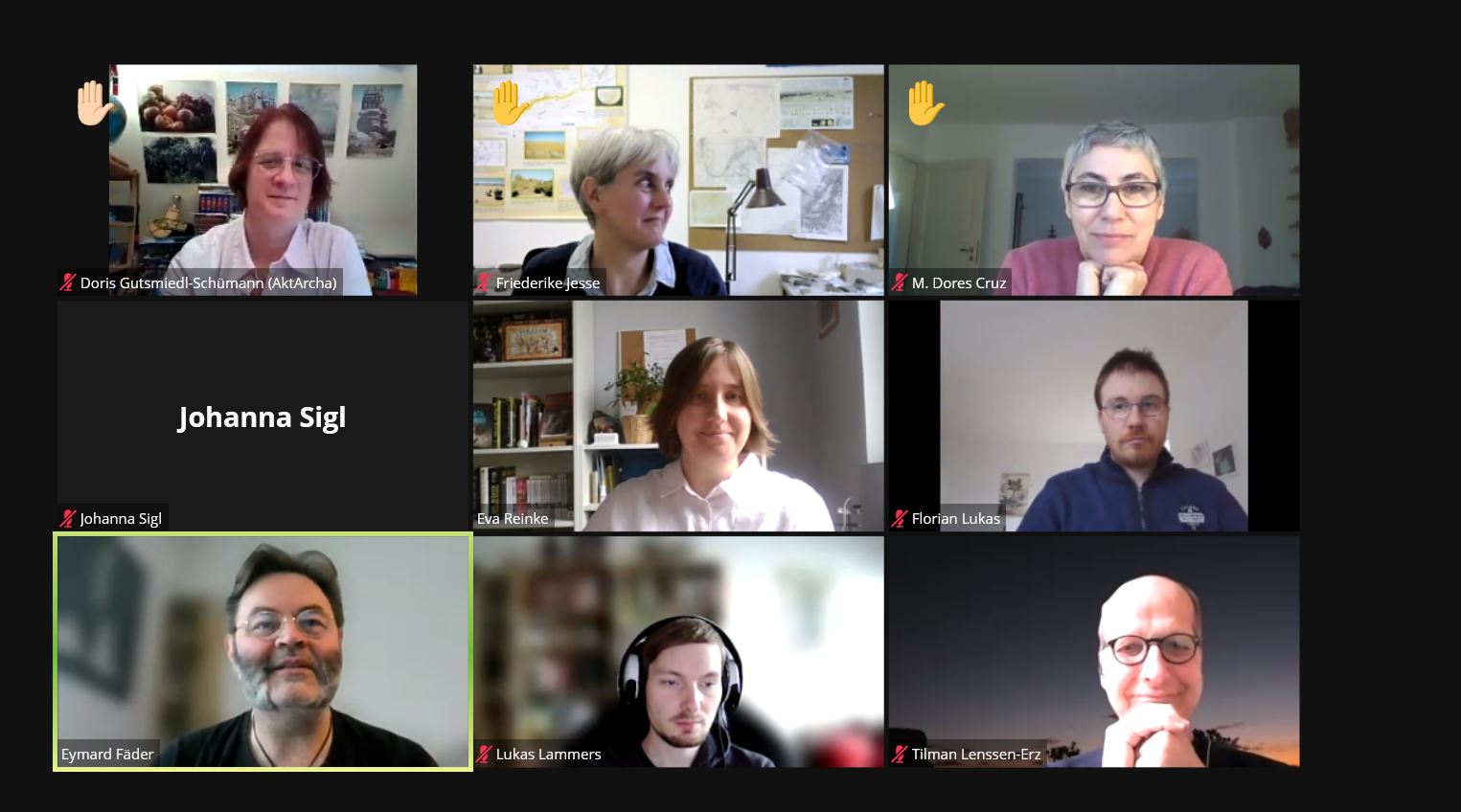 The participants during one of the lively discussions (Attribution & Copyright: J. Sigl)

(In)Visible Women - How They Shaped our Past

Since their emergence, the modern sciences of all disciplines have had one thing in common: they have been dominated by male (and mostly white) researchers. Today, it is undisputed that this situation has had an impact on the focus of research and the results obtained. In recent decades, there have been increasing attempts to achieve equality in academic personnel as well as in the preparation and interpretation of research data. Triggered by the study of chronological data from Africa, our priority programme is thus also concerned with the ways in which women are represented in these data.

The Working Group “(In)Visible Women” invited to a first workshop on November 7th 2022. The goal of the workshop was an exchange on whether the “invisible” women behind the names of their husbands, brothers or sons present in contemporary history should be brought more to the foreground and what effects this has on the understanding of historiography. Concrete examples of gender issues in the interpretation of archaeological finds served as case studies and further basis for discussion.

The starting point for the initiators of the workshop was the treatment of the dynastic chronology of Ptolemaic Egypt and the resulting question of how to deal with female rulers apart from the famous Cleopatra VII. After an outline of the current state of research on Egyptian chronology and the reflection on women in the information sciences, an intensive discussion ensued. The core points of the discussion were, on the one hand, the rules and guidelines according to which the chronologies of Egypt and other empires based on male rulers were compiled. On the other hand, it was discussed how the modern pictorial representation of archaeological research results promotes the dissemination of gender stereotypes and thus possibly inaccurately represents the scientific results.

In the second part of the workshop, examples from archaeological as well as ethnoarchaeological fieldwork were presented in which the roles and representation of women were central: For example, at and around the Brandberg in present-day Namibia, several thousand rock paintings are found that are between 2000 and 4000 years old and clearly show both women and men engaged in distinct activities. Both were probably assigned special spheres of activity – interestingly, the “men were hunters, women were gatherers” dichotomy, which is fraught with stereotypes in Europe, plays no role in the Namibian rock paintings. Research on the production and use of ceramic vessels in the present and past in West and South Africa (Mozambique, Mali, Ghana and Gambia were presented) also revealed regionally specific differences in competence between men and women, so that work with ceramics/clay is neither seen as a purely female nor male domain, as is nevertheless often the case in archaeological interpretation today. In the following, technologies, traditions, social images and the respective roles that men and women took and take in these, as well as the dangers that a direct transfer of ethnoarchaeological findings to earlier epochs can entail, were discussed in an animated way.

The initiators of the workshop were able to draw from these discussions a multitude of new suggestions and ideas for the future work of the Working Group (In)Visbile Women. These will now be integrated into the conceptual work of the Working Group and presented to all members of the programme at the SPP annual meeting in January 2023. In addition, it is of mutual interest to intensify the cooperative work with the planned exhibition “Planet Africa” and to consider together how the historical roles of women can also be more clearly emphasised here.