Losing your head at Göbekli Tepe

Just back from this year´s ICAANE in Vienna, where a very inspiring workshop on the “Iconography and Symbolic Meaning of the Human in Near Eastern Prehistory” was organized by Jörg Becker, Claudia Beuger and Bernd Müller-Neuhof. As publication of the contributions will take some time, here is a small summary of our musings on anthropomorphic imagery at Göbekli Tepe.

Göbekli Tepe is a special site in many respects: its location is hostile to settlement, no water sources are in vicinity; clear evidence for domestic building types missing so far in Layer III; only selection of material culture is present (very few bone tools, clay figurines absent); and there is a considerable investment of resources and work. This investment was not only made in building Göbekli Tepe. At the end of their uselifes, all buildings of layer III (PPN A, 10th millennium) were at least partially intentionally backfilled. The filling consists of limestone rubble from the neolithic quarry areas on the adjacent plateaus, mixed with large quantities of animal bones, flint debitage, artefacts and tools. Before backfilling started, it seems that the buildings were cleaned. If roofs should have existed, they were dismantled at that time, because absolutely no traces of them were found. 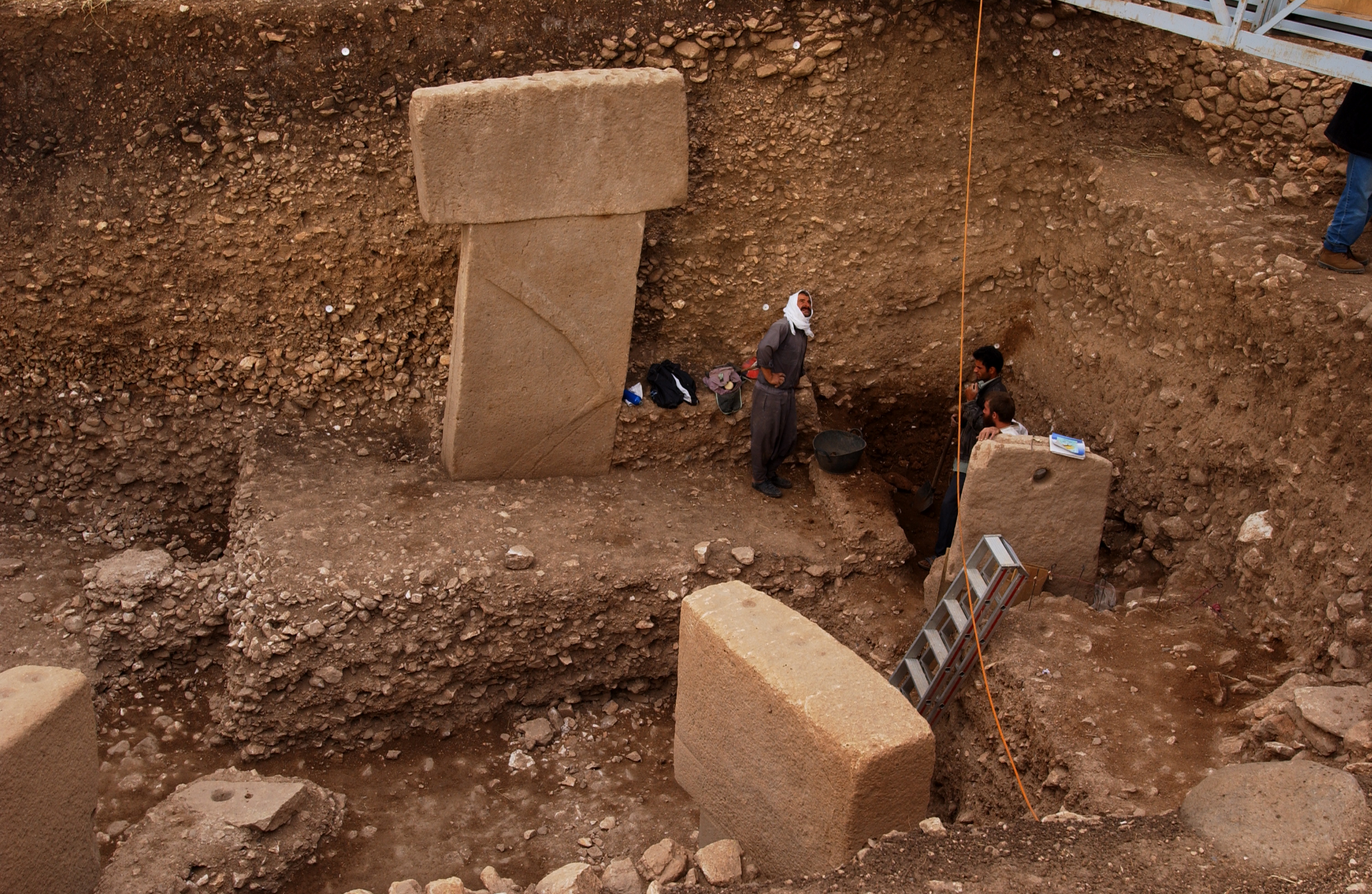 The backfilling obviously is a limiting factor for our understanding of the function of the enclosures, as very few in situ deposits connected to the use-time of the buildings remain. However, it seems that the backfilling was a very structured process that included certain deliberate acts. Between them, the deposition of artefacts and sculptures [here, here, here, and here] inside the filling, often next to the pillars, is most striking. 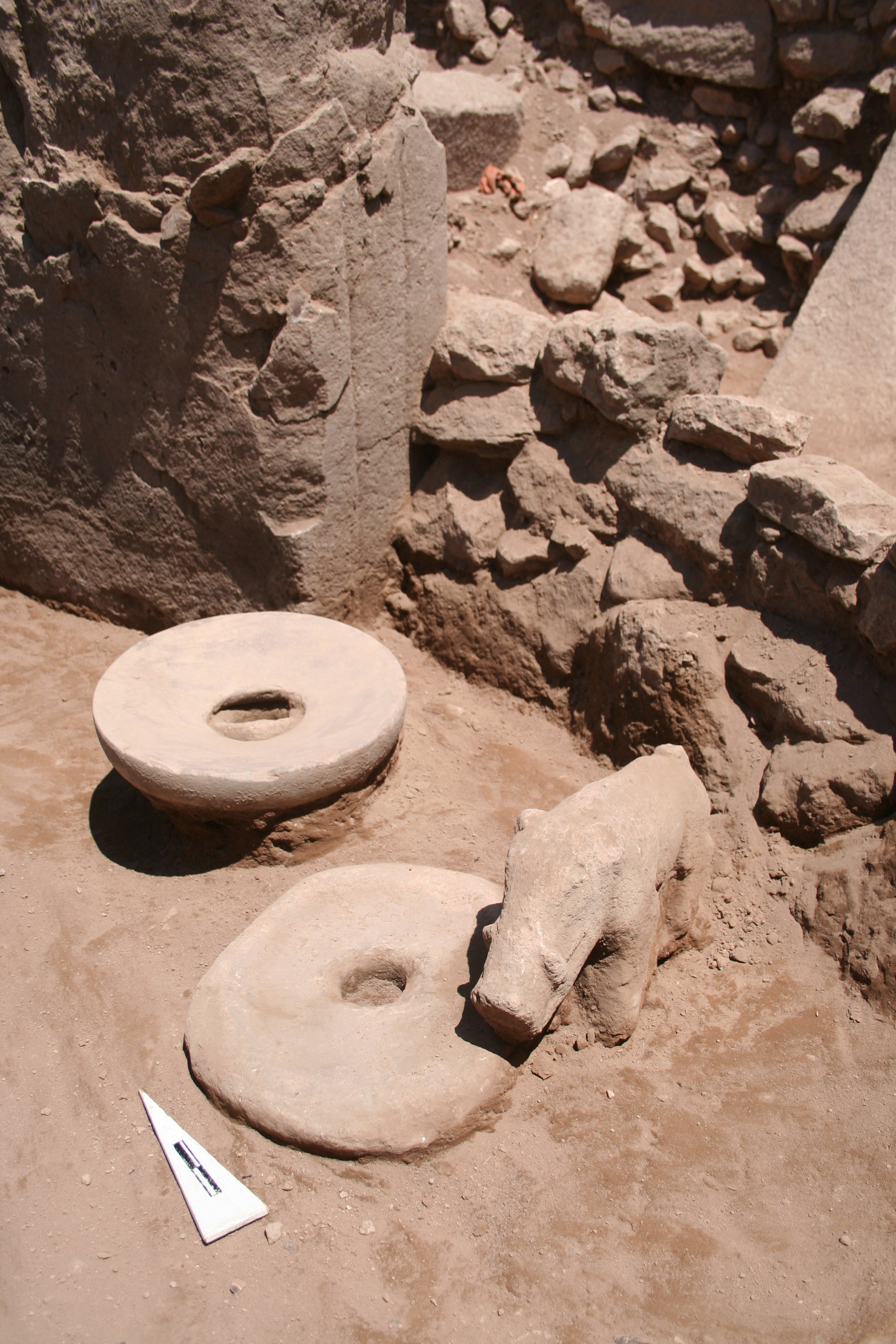 Deposition of a boar sculpture an stone plates next to one of the central npillars of Enclosure C (Photo: K. Schmidt, Copyright DAI).

So, at Göbekli Tepe we do not know very much about the actual usetime of the buildings. We have however the enclosures themselves, their layout, and the richly decorated pillars as starting points. And we know a lot of the things people did with these enclosures at the end of their uselife. It seems that they tried to highlight certain aspects of the enclosures´ meaning through their actions. 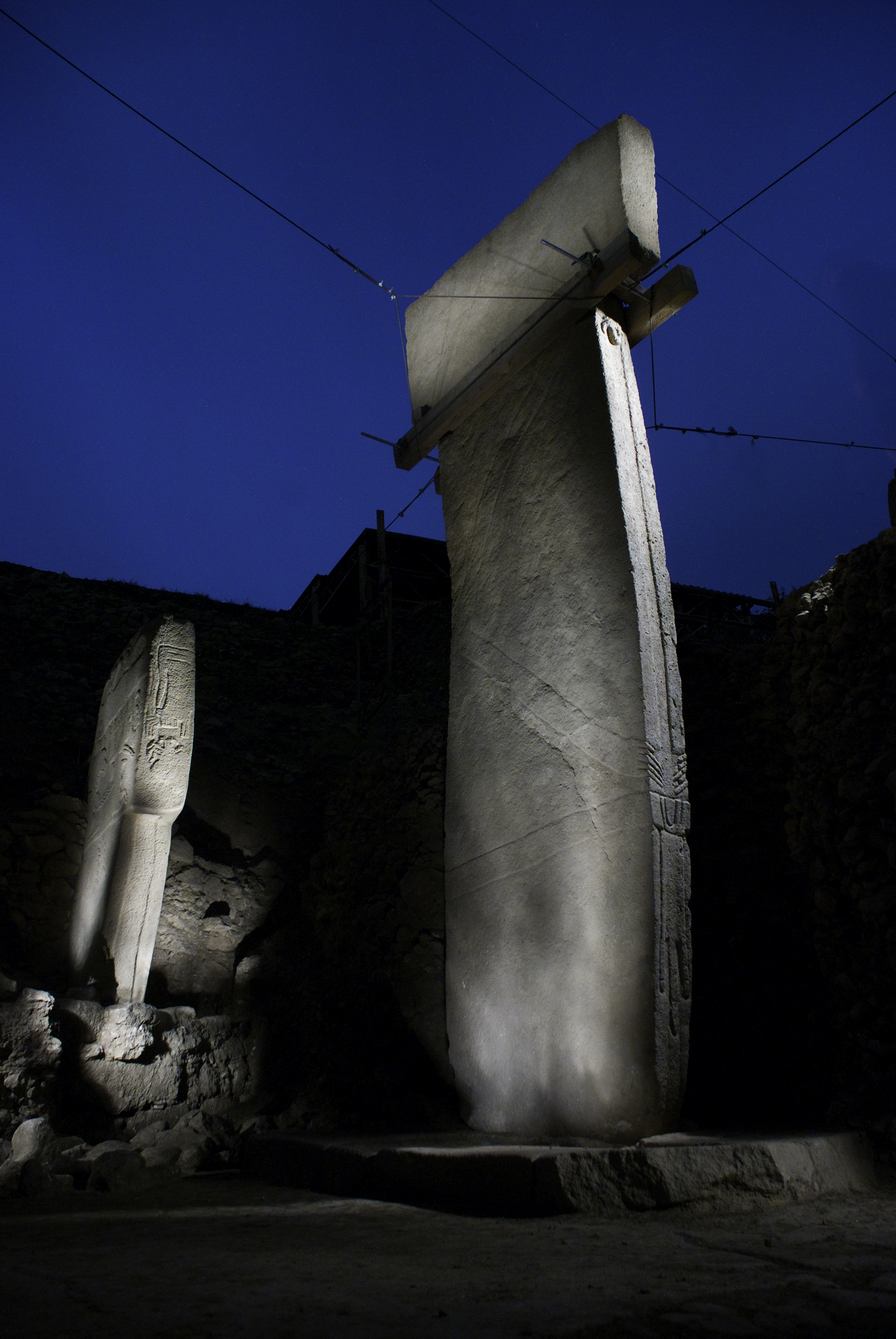 There are several different categories of human imagery at Göbekli Tepe. Most impressive are the T-shaped pillars. The T-shape is clearly an abstract depiction of the human body seen from the side. Evidence for this interpretation are the low relief depictions of arms, hands and items of clothing like belts and loinclothes on some of the central pillars. There is a clear hierarchy of pillars inside the enclosures. The central pillars are up to 5,5 m high, they have the already described anthropomorphic elements. The surrounding pillars are smaller, but more richly decorated with animal reliefs than the central ones. They are always „looking“ towards the central pillars, and the benches between them further amplify the impression of a gathering of some sort. Whether we are dealing with depictions of ancestors of different importance, or even of gods, would be a topic for itself and an answer is hard to find at the moment.
What is clear however is that both central and surrounding pillars share the abstracted form. This abstraction is not due to the limited skills of Neolithic people in depicting the human body. It is a deliberate choice that has a meaning. 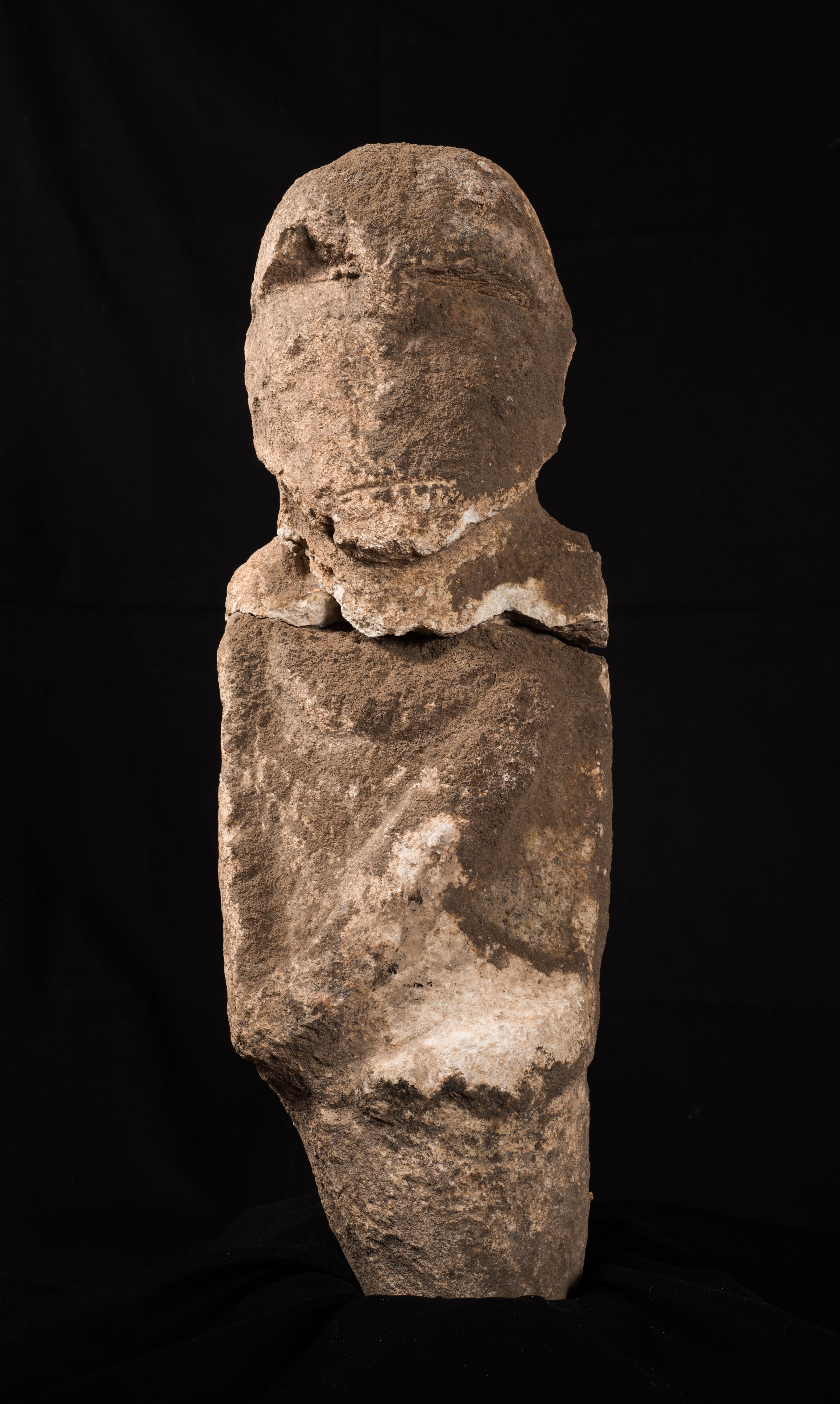 The other important category of depictions are more naturalistic sculptures. A total of 143 sculptures was found so far at Göbekli Tepe. Of those, 84 depict animals, 43 humans, 3 phalli and 5 are human-animal composite sculptures. It is striking that most anthropomorphic sculpture at Göbekli Tepe is fragmented. Of the 43 human-shaped depictions, only 9 can be regarded as complete, if we do not take smaller damages into account. What is also striking is that – in spite of large-scale excavations – there is only one case in which fitting fragments were found. If we have a closer look at the fragments preserved, a pattern emerges. The fragments preserved in the highest numbers are heads, not the often bigger torsi. The large number of broken off heads, and the regulated fractures, speak in favor of intentional fragmentation. 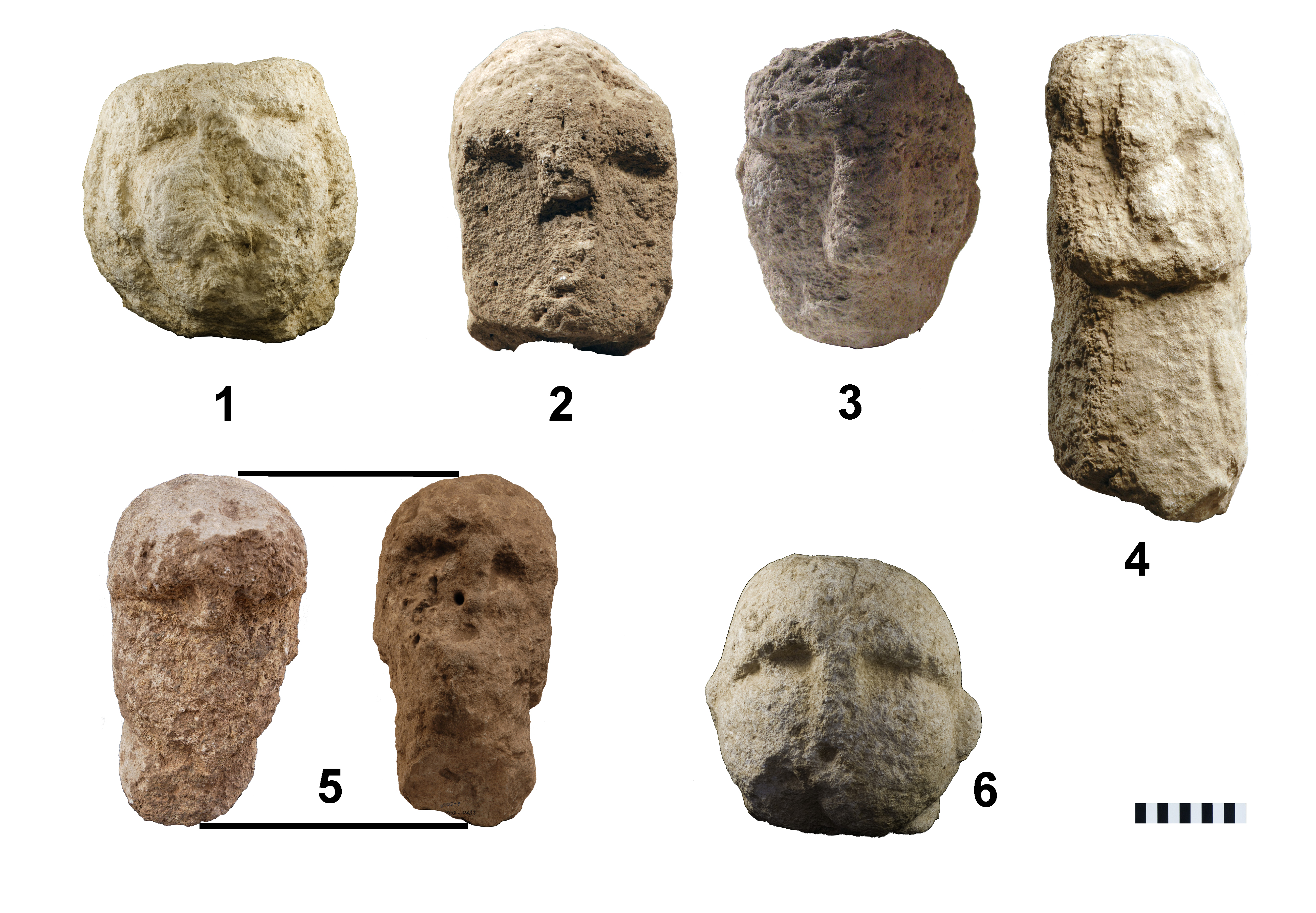 A selection of anthropomorphic heads from Göbekli Tepe (Photos: DAI).

Further, the heads were not discarded randomly. They were deposited carefully in the enclosure fillings, often next to pillars. Their treatment is similar to zoomorphic sculpture in this respect. However, zoomorphic depictions are most often complete, there is no indication of intentional damage. So while deposition patterns are similar, pre-deposition treatment is not. Human heads seem to have had a special role in the beliefs connected with the enclosures. 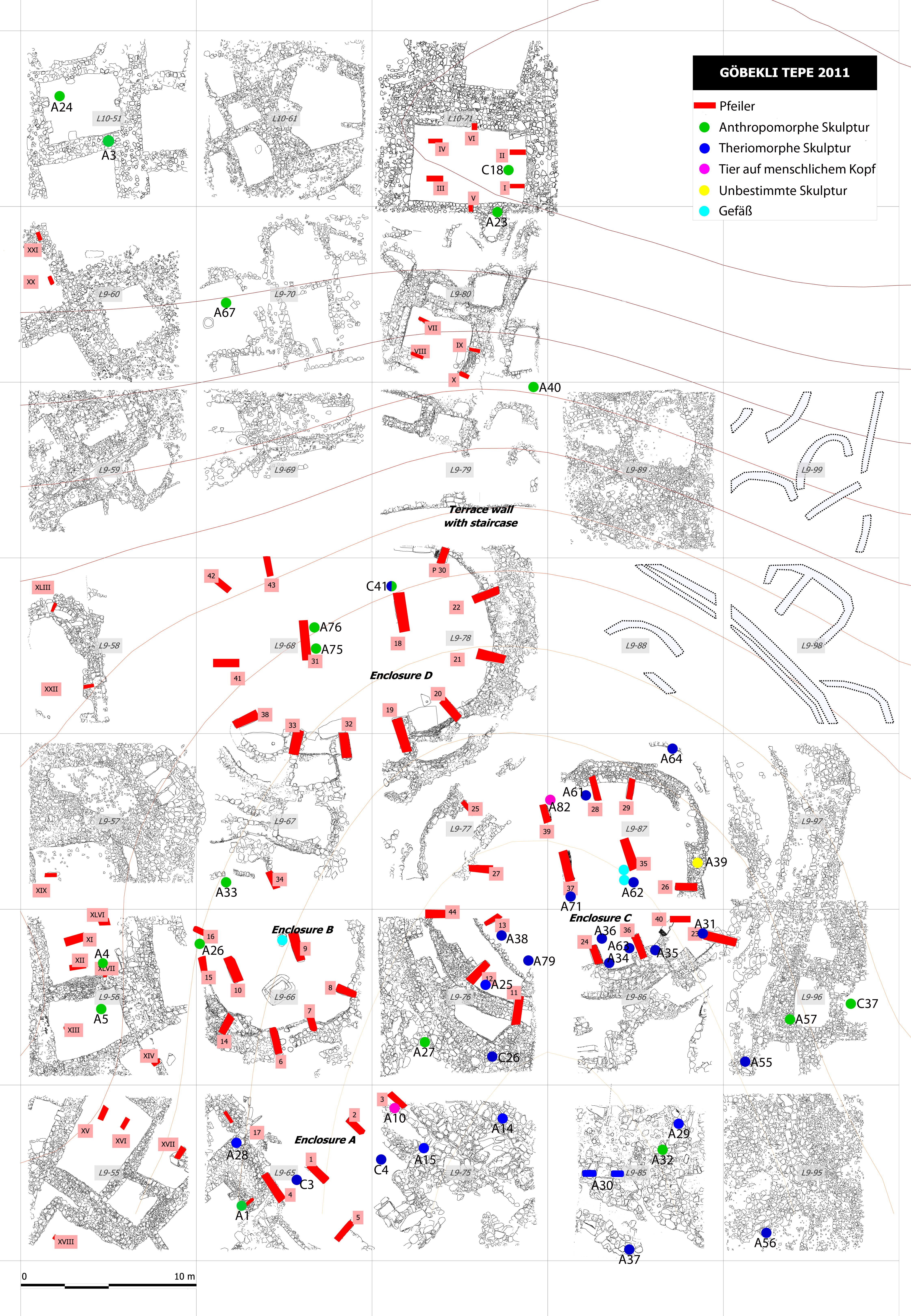 The special role of separated human heads is also visible in Göbekli Tepe´s reliefs. Immediately behind the eastern central pillar of Enclosure D the fragment of a relief was found. It shows a human head among several animals – a vulture and a hyena can be clearly identified. Another example is Pillar 43, also in Enclosure D. There, a headless ithyphallic body is depicted among several birds, snakes and a large scorpion. The interaction of animals with human heads is even clearer from several composite sculptures discovered at Göbekli Tepe. They show birds, but also quadrupeds sitting on top of human heads or carrying them away. A relation of this kind of iconography with early Neolithic death rite and cult is evident. 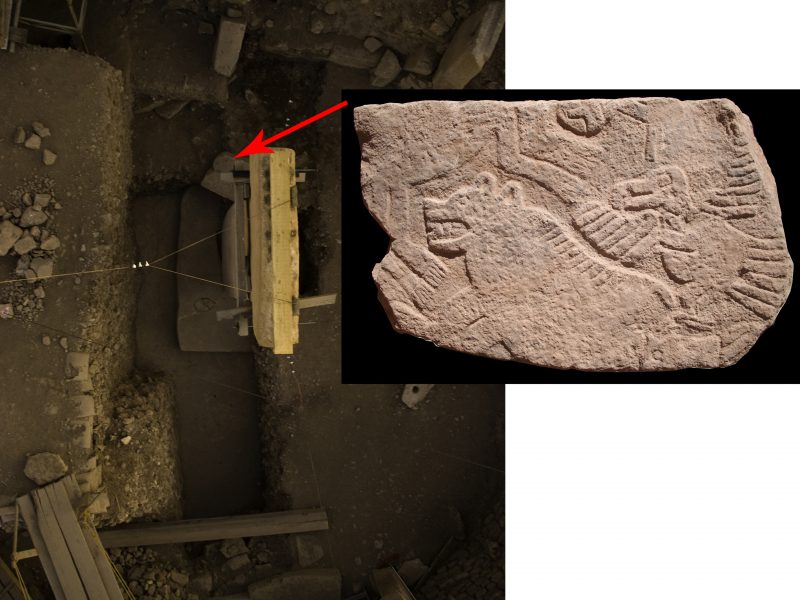 Fragment of a relief showing a separated human head among animals. Found next to one of the central pillars of Enclosure D (Photos N. Becker, Copyright DAI). 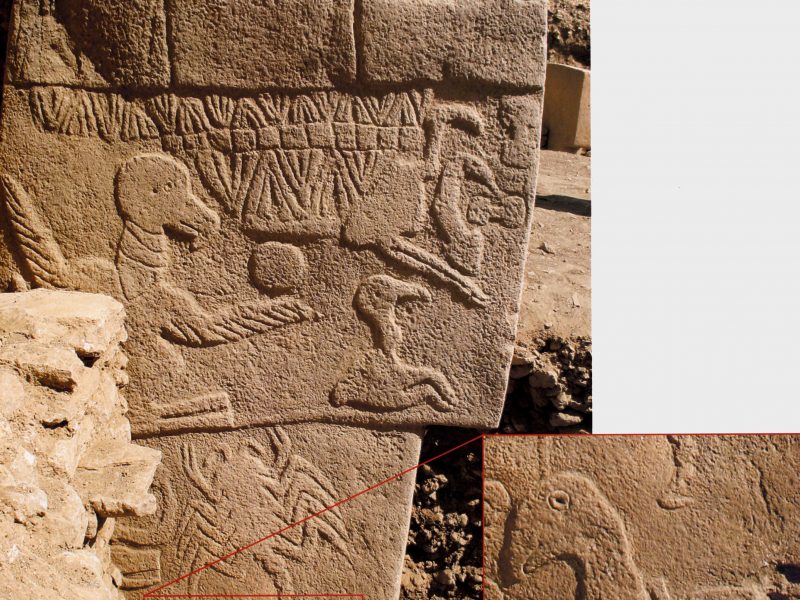 Pillar 43 in Enclosure D with a depiction of a headless man (Photo K. Schmidt, Copyright DAI).

The special treatment and the removal of skulls is well-attested for the PPN. One of the most remarkable examples is the skull building from Cayönü. At this site, the situation is very much opposed to Göbekli Tepe however. There are lots of burials, but only a few anthropomorphic depictions. At Nevali Cori, burials with separated skulls, in one case with a flint dagger still in place, were discovered, but also an imagery that is very similar to Göbekli Tepe. For example, the so-called totempole shows a bird sitting on a human head. There is also a larger number of limestone heads from Nevali Cori, mirroring the situation at Göbekli Tepe to some degree. Of course, one could also add the special treatment of human heads in many southern Levantine sites, but also at Köşk Höyük and Catalhöyük here. At Catalhöyük, we find many of the elements observable at Göbekli Tepe still in place in a much later context. This includes iconography of birds carrying away human heads, special treatment of heads in burials and figurines with intentionally broken off heads, or with heads designed from the start to be taken off.

To sum up, at Göbekli Tepe there is evidence of a hierarchy of anthropomorphic depictions. The central pillars of the enclosures are abstracted and clearly characterized as anthropomorphic by arms hands, and items of clothing. The surrounding pillars are also abstracted, but smaller, and show mainly zoomorphic decorations. They are looking towards the central pillars and evoke the association of a gathering.
Naturalistic anthropomorphic sculpture is smaller and intentionally fragmented. During backfilling of the enclosures, a selection of fragments, mostly heads, was placed inside the filling, most often near the central pillars. This practise is highly evocative of elements of neolithic death cult that also reflects in Göbekli´s iconography.
It seems that the abstracted pillar-beings represent another sphere than the naturalistic sculptures. Zoomorphic and anthropomorphic sculpture is placed next to them. The connection to death rites could indicate that the pillars belong to that sphere. Whether we are dealing with depictions of important ancestors here, and whether the deposition practice of fragmented sculpture, and, during the use-time of the enclosures, possibly human heads- vizualizes that new members are added to this group, remains a question for further studies.

Özdoğan, Mehmet and Aslı Özdoğan .1998. „Buildings of cult and the cult of buildings.“ In Light on top of the Black Hill. Studies presented to Halet Çambel, edited by Güven Arsebük, Machteld J. Mellink and Wulf Schirmer, 581-601. Istanbul: Ege Yayınları.

On Çatalhöyük:
Hodder, I. 2011. Çatalhöyük. The Leopard´s Tale. London: Thames and Hudson.

On Neolithic death and skull cult (just a few points to start from, there is vast literature on this):
Bienert, H.-D. 1991. Skull Cult in the Prehistoric Near East, Journal of Prehistoric Religion 5, 9-23.