We have finally published some thoughts on processing and use of cereals at Göbekli Tepe. As the text is open access, we will just leave the link , some beautiful images of phytoliths, use-wear and grinding stones as well as the abstract here: 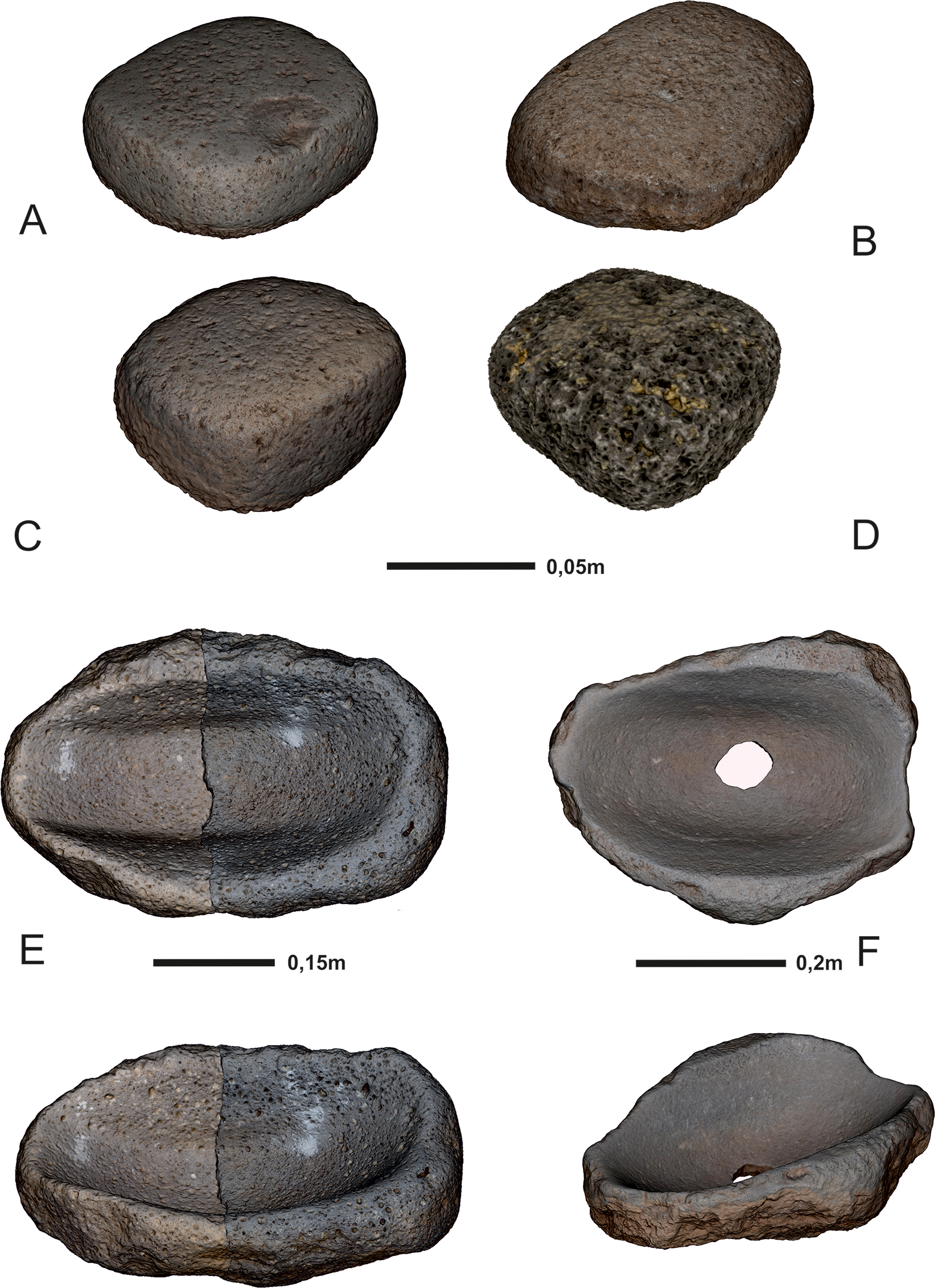 We analyze the processing of cereals and its role at Early Neolithic Göbekli Tepe, southeastern Anatolia (10th / 9th millennium BC), a site that has aroused much debate in archaeological discourse. To date, only zooarchaeological evidence has been discussed in regard to the subsistence of its builders. Göbekli Tepe consists of monumental round to oval buildings, erected in an earlier phase, and smaller rectangular buildings, built around them in a partially contemporaneous and later phase. The monumental buildings are best known as they were in the focus of research. They are around 20 m in diameter and have stone pillars that are up to 5.5 m high and often richly decorated. The rectangular buildings are smaller and–in some cases–have up to 2 m high, mostly undecorated, pillars. Especially striking is the number of tools related to food processing, including grinding slabs/bowls, handstones, pestles, and mortars, which have not been studied before. We analyzed more than 7000 artifacts for the present contribution. The high frequency of artifacts is unusual for contemporary sites in the region. Using an integrated approach of formal, experimental, and macro- / microscopical use-wear analyses we show that Neolithic people at Göbekli Tepe have produced standardized and efficient grinding tools, most of which have been used for the processing of cereals. Additional phytolith analysis confirms the massive presence of cereals at the site, filling the gap left by the weakly preserved charred macro-rests. The organization of work and food supply has always been a central question of research into Göbekli Tepe, as the construction and maintenance of the monumental architecture would have necessitated a considerable work force. Contextual analyses of the distribution of the elements of the grinding kit on site highlight a clear link between plant food preparation and the rectangular buildings and indicate clear delimitations of working areas for food production on the terraces the structures lie on, surrounding the circular buildings. There is evidence for extensive plant food processing and archaeozoological data hint at large-scale hunting of gazelle between midsummer and autumn. As no large storage facilities have been identified, we argue for a production of food for immediate use and interpret these seasonal peaks in activity at the site as evidence for the organization of large work feasts.

Plant food is a factor so far slightly neglected in research about Göbekli Tepe. We are now aiming to close this gap [read more here and here]. Preliminary results on grinding equipment from Göbekli Tepe and experimental approaches will be presented at this year´s Awrana (Association of Archaeological Wear and Residue Analysts, external link) conference at University of Nice Côte d’Azur on May 31, in a collaborative paper by Laura Dietrich, Oliver Dietrich, Julia Heeb  and Nils Schäkel.

During the 10th and 9th millennia BC, at Göbekli Tepe in southeastern Anatolia, hunter-gatherers constructed the first monumental architecture of mankind. In an older phase, circular enclosures made up of up to 5.5m high pillars decorated richly, mainly with animal motifs, were erected, while in a younger phase rectangular buildings with smaller pillars were in use. Important questions regarding this site concern the way in which small-scale groups joined their forces for the massive construction work, creating a place strongly connected to their worldview, and how they secured their subsistence during the prolonged work at the site.

Until now, the focus was on the numerous finds of animal bones and hunting as subsistence strategy. This image may be biased by bad preservation conditions for plant remains, as more than 10.000 grinding stone were discovered at the site, reaching from flat slabs over deep bowls to mortars, pestles and handstones. At least in the younger phase of the site, a number of the square rooms could be interpreted as storage facilities, as they also contain large limestone vessels with capacities of up to 200 liters. Macroscopic and microscopic use wear hint at the use of the grinding stones for massive plant food processing. This interpretation is based on a comparison with experimentally manufactured objects. During the experiments, use-wear was related to shapes and to the grinding motions as important analytical parameters.

The paper aims to reveal the role of plant food at Göbekli Tepe, and linked with this, economic and social factors related to the construction and maintenance of this important site.

How did they do it? Making and moving monoliths at Göbekli Tepe

The T-shaped pillars discovered at Göbekli Tepe are big. The central pair of Enclosure D measure 5.5 m and weigh about 8 to 10 metric tons each. The surrounding pillars are smaller, but still reach around 4 m. How Stone Age people were able to make these pillars and to transport them seems a mystery to many of the site’s visitors. We can however offer some answers to both questions, as we are in the lucky situation to know where the pillars come from. Göbekli Tepe lies on an otherwise barren limestone plateau at the highest point of the Germuş mountain range. The quarry areas for the megalithic workpieces lie on exactly that plateau. As there are several loci with impressive traces of the Stone Age masons, the plateau forms part of the archaeological site and reservation.

The location for the quarries was not chosen without reason. The limestone surrounding Göbekli Tepe is banked, strata of about 0.60 – 1.50 m thickness are divided by fault lines. This means that you just have to dig around a work piece, not also beneath it. As limestone goes, the material at Göbekli Tepe is pretty hard and cristalline, and there are no carstic phenomena. Which means that it is a first class raw material for sculpting and masonry. Even the hardest limestone is however so soft that it can easily be worked by flint tools.

Flint picks, and possibly also wooden tools were used to dig channels in the form of the desired workpiece into the limestone. The Stone Age quarry workers would choose a location on the plateau where the banks had approximately the thickness of the final piece. When they reached the fault line, most probably wooden beams and wedges were used to lift the piece out. Although the limestone at Göbekli Tepe is of good quality, in several cases something went wrong and nearly finished pillars, stone blocks, rings and other pieces were left in the quarries. This is an especially lucky situation for the archaeologist, as we can observe the techniques employed first hand. Most impressive is a T-shaped pillar far out on the edge of the western plateau. The location shows another work-reduction strategy: if you start at the edge of the plateau, you do not have very much material to remove on one side. And you know exactly how thick the limestone bank is before you start. The pillar still lying here is the largest discovered so far at Göbekli Tepe. It has 7 m and is 1.5 m thick. Why exactly it was left at the quarry site is not clear. A small crack may have formed in the stone during work, or some kind of natural flaw became visible. With workpieces that big, small flaws mean an instability that will most likely cause the pillar to break during transport or installation at its final location. In this case, the distance to the tell is several hundred meters. Another possibility is that the project turned out to be just a little too big in the end.

For the second part of such a project, the transport, direct traces are absent from Göbekli Tepe. Ethnographic evidence from Indonesia, where megaliths are built still today at grave sites, hints at sledges and wooden planks as the tools of choice. The number of people involved is hard to guess. The distances the monoliths had to be hauled to the tell are comparatively small at Göbekli Tepe, in the worst case about 500m, in the best less than 100m. But the monoliths hewn from the bedrock are large and heavy, in case of the 7.0m pillar the weight would have been around 50 metric tons. Ethnographic records from the early 20th century report that on the Indonesian island of Nias 525 men were involved in hauling a megalith of 4 cubic meters (considerably smaller than at GT) over a distance of 3 km (considerably more than at GT) to its final location in 3 days using a wooden sledge (Schröder 1917). That such a large number of participants is not necessarily caused by the labour involved exclusively, shows another example from Indonesia. In Kodi, West Sumba, the transport of the stones themselves used for the construction of megalithic tombs is ritualised and asks for a large number of people involved as witnesses (Hoskins 1986).

So, even if the making of the large pillars is not such a big mystery, and absolutely possible with Stone Age tools and detailed knowlegde of the raw materials (no need to involve aliens here!), there are still some open questions to resolve.