Behind the Mask: Early Neolithic miniature masks (and one larger-than-life example) from Göbekli Tepe (and beyond).

(A longer and more extensive version of this text was originally published recently: O. Dietrich, J. Notroff, L. Dietrich, Masks and Masquerade in the Early Neolithic: A view from Upper Mesopotamia, Time and Mind 11:1, 2018, 3-21 [external link].)

Among early prehistoric masks, those from the Judean Hills and Desert [external link] can be considered the most prominent examples. These masks, made of stone and weighing up to approximately 2 kg, strike the modern observer with their almost expressionistic facial features – each is individual, as if depicting specific individuals or beings. Some have holes around the rim, probably to allow attaching them to something, or to actually wear them (although they are fairly heavy). Chronologically, the oldest of these Southern Levantine masks belong to the Pre-Pottery-Neolithic B, i.e. the mid 9th and 8th millennia BC. Since specimens excavated in the Nahal Hemar cave (Israel) in the early 1980s were found within an assemblage interpreted as ‘cultic’ a ritual use of these masks was assumed (Bar Yosef & Alon 1988). The Southern Levantine examples are special and important, but not unique in their period. Within the rich repertoire of sculpture from several contemporary sites in this region, a few artefacts with concave or flat rear backs stand out that could be interpreted as depitions of masks. 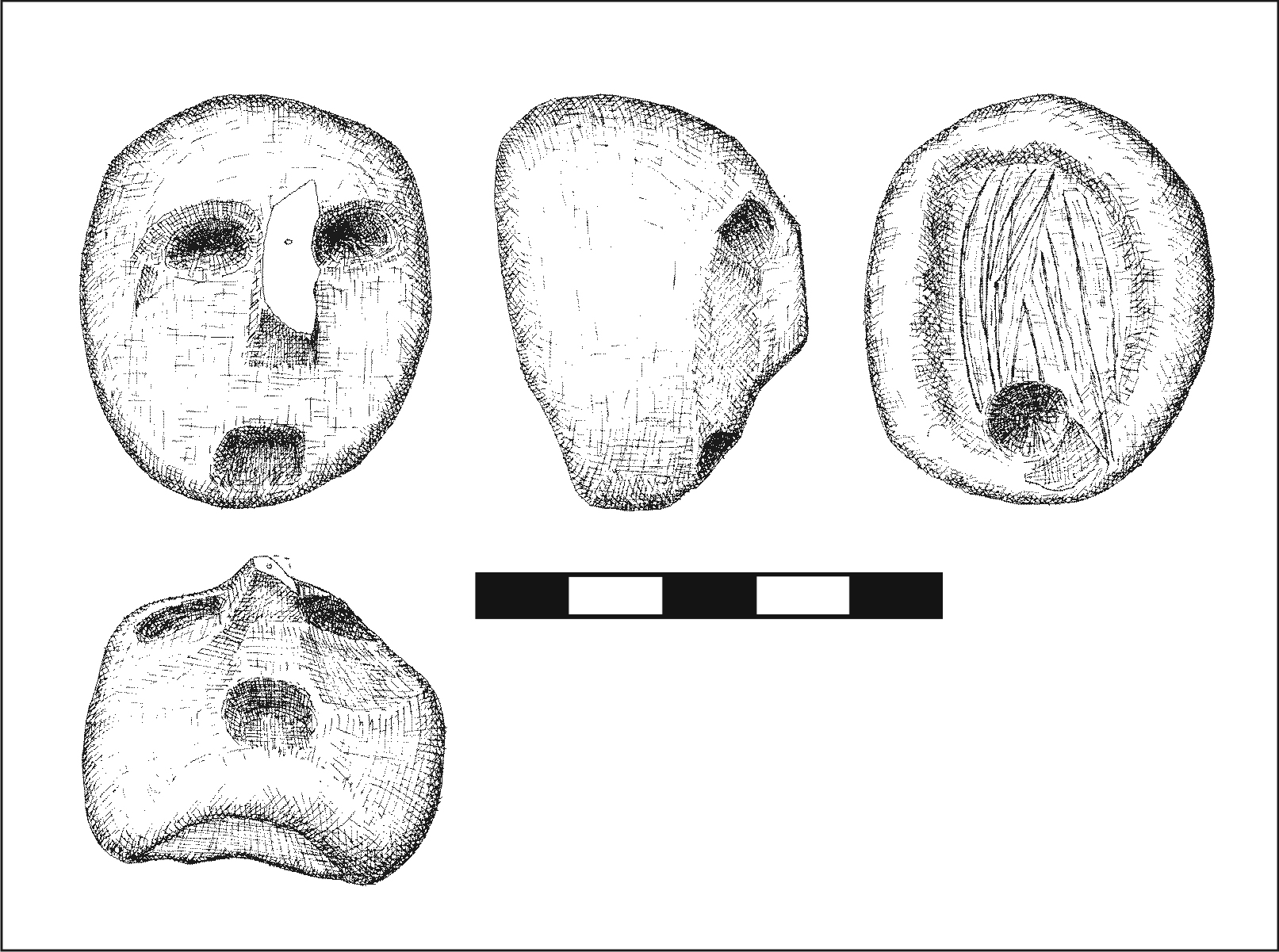 From Jerf el Ahmar, a PPNA A/transition to PPN B site in northern Syria (characterised by round and rectangular buildings with limestone foundations) two little stone heads are reported which show a conspicuous concave cavity on their backside (Jammous & Stordeur 1999; Stordeur & Abbès 2002). They are made from pebbles, only about 4 cm high and show eyes, a nose, and mouth. The backside of one of these objetcs is grooved, the other one concave. Another miniature stone mask of similar size is known from Nevalı Çori (Figure 1) in southeastern Turkey (Badisches Landesmuseum 2007, 292, nr. 110, Fig. 110; Hauptmann 2011, Fig. 17). Again eyes, nose, and mouth are depicted, the back is concave. From its find context, a middle-PPN B date can be assumed for this mask. Nevalı Çori furthermore has become well known as the first place there a characteristic element of PPN architecture of the region was discovered: T-shaped, apparently anthropomorphic, pillars which link it to another site nearby which also has produced a number of comparable masks: Göbekli Tepe. 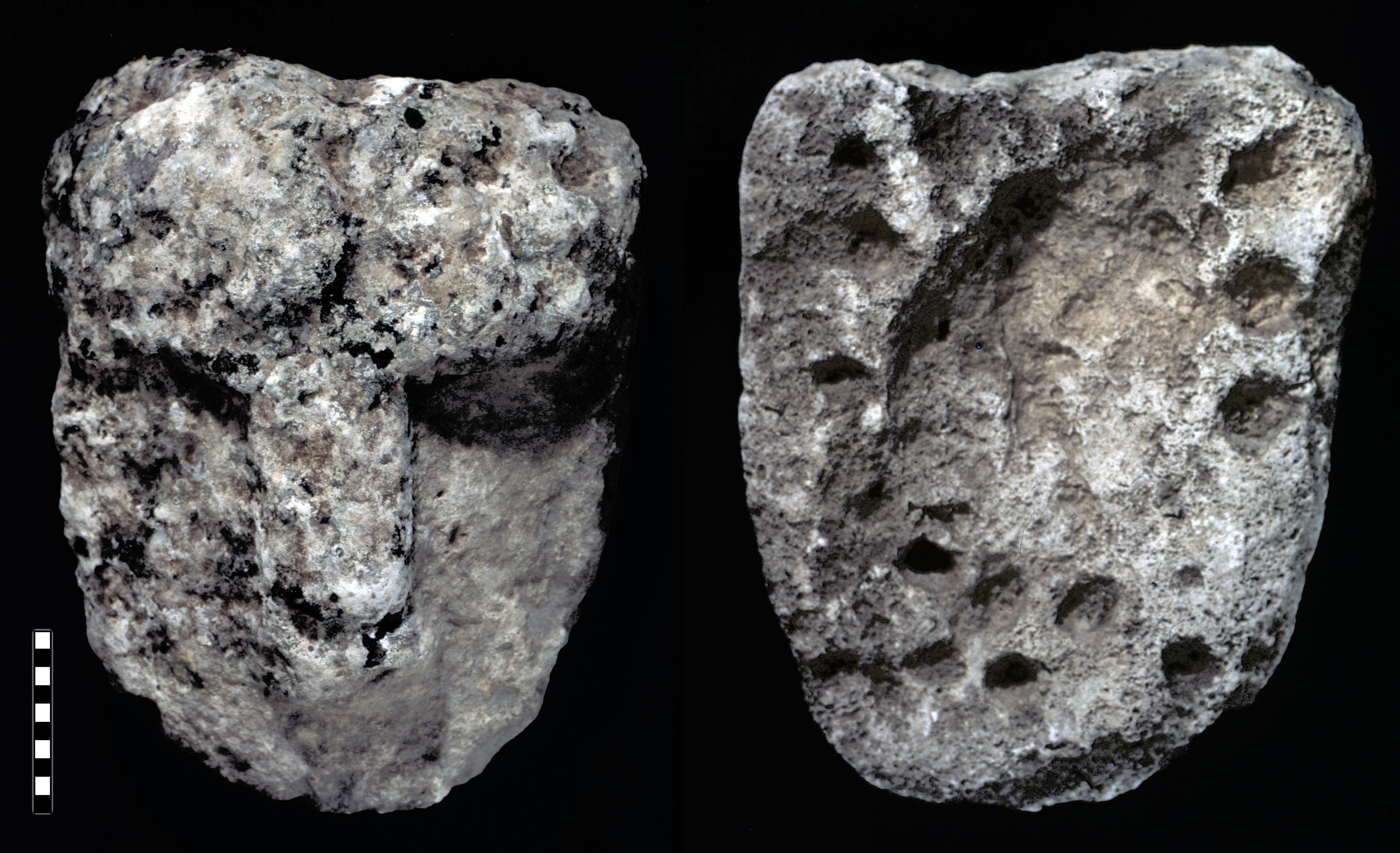 A first, larger than life-sized (height: 42 cm) and complete human mask (Figure 2) made from limestone was found during clearance work before beginning of excavations in 1995 (Schmidt 1996: 2-3, Fig. 1). The depiction of the face is minimalistic, almost abstract. They eyes are very faint and the mouth is absent. Forehead and nose are carved in a geometrical manner, almost resembling a ‘T’. This manner of portraying the human face is characteristic also for three-dimensional anthropomorphic sculpture at Göbekli Tepe and thus a clear indicator that a human face is depicted here. Due to its height it seems too large to be actually worn, but could have been intended to be fixed to a wall or another kind of support. 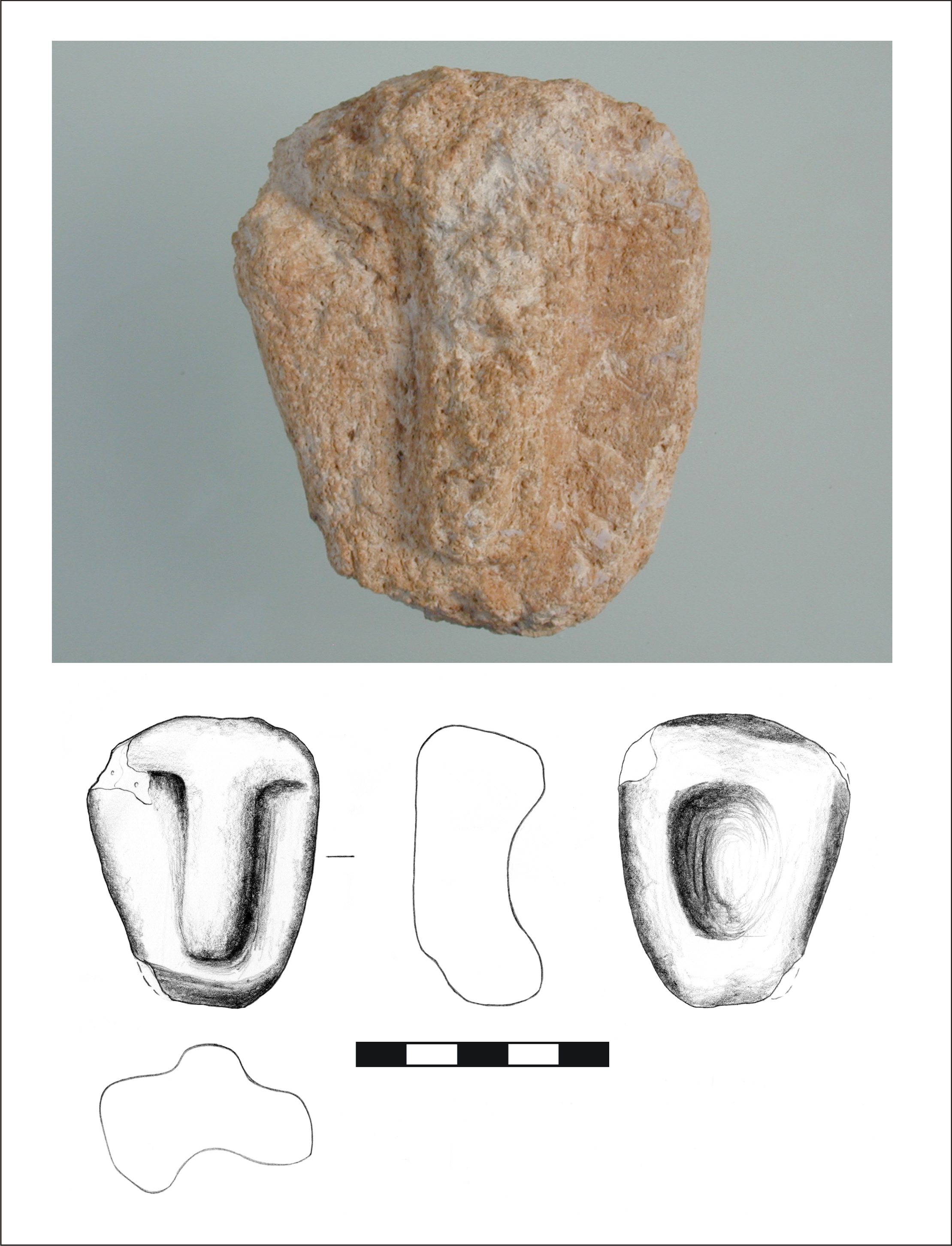 The second example is another miniature (height: 5.7 cm), also made from limestone (Badisches Landesmuseum 2007: 275, No. 29, Fig. 29). It was found in the upper layers of the filling of Enclosure D in 2001 (Figure 3). With a concave rear like the specimen reported from Nevalı Çori, it follows the same minimalistic principle as the large mask from Göbekli Tepe. Again, it is clear that a human face is depicted, but individual characteristics are not given. The eyes are not even suggested here, a mouth is absent again. 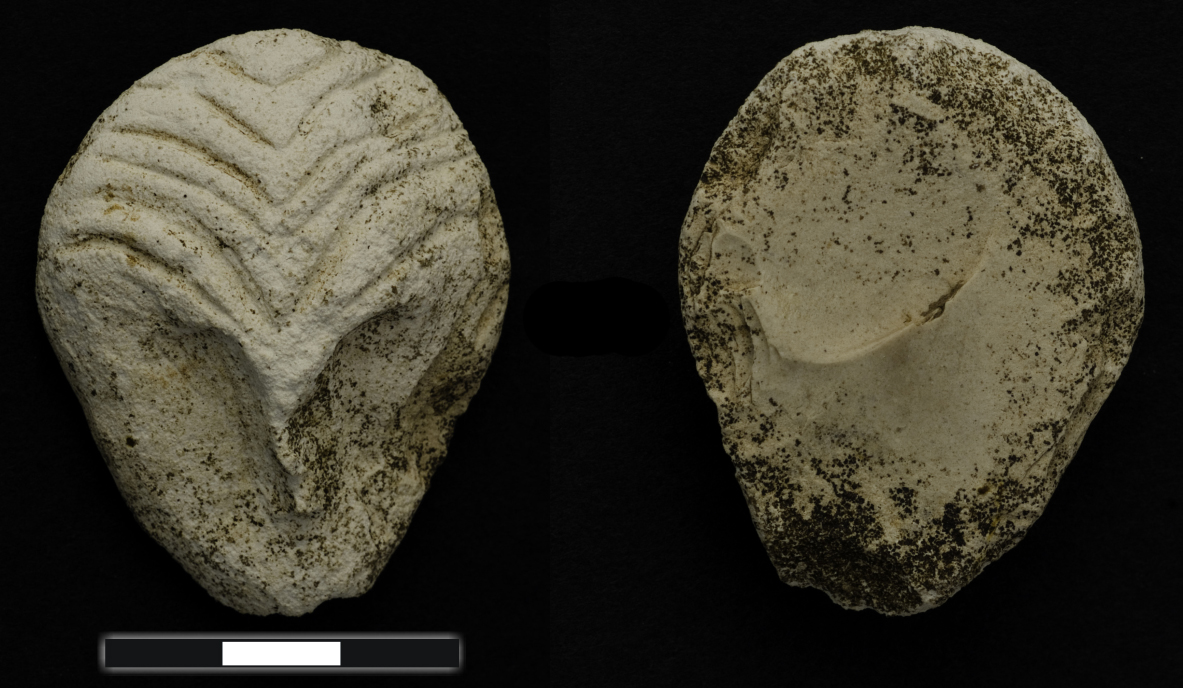 The third mask, a miniature again (height: 4.7 cm) is of a different type (Figure 4). Not only was it made from a flint cortex, it also is much more expressive, due to curved chevrons engraved into its forehead, not unlike the mask from Jerf el Ahmar discussed above. This may indicate a headdress, but the fairly low setting of the lines could also hint at tattooing or scarification. The back was not finished. This mask was found in 2010, high in the stratigraphy, during excavations in Enclosure H, next to (central) Pillar 51.

A fourth miniature (height: 4.5 cm high) of a mask was also engraved into a flint cortex (Figure 5). Its form follows the reduced depiction of the face of the first two examples again, with more pronounced eyes. It was found in 2008 next to the eastern central pillar of Enclosure C.

While the first mask can only broadly be dated to the PPN as a surface find, the second mask from the filling of Enclosure D could indicate a PPN A date, as could the miniature mask from Enclosure C, with its position nearby one of the central pillars. Enclosure C has been damaged and disturbed in prehistory by a large pit directed at the central pillars, but the mask seems to come from an untouched floor layer. The third mask was found next to a central pillar of Enclosure H. The stone circle was also damaged and disturbed in prehistory already.

Three of the masks found at Göbekli Tepe have undoubtedly a similar style to the example from Nevalı Çori. They show non-individualized faces. However, at Göbekli Tepe the mouth is not depicted, while the Nevalı Çori mask almost gives the impression of a screaming face. Together with the finds from other sites, a large repertoire of masks in different styles is suggested. All types, with and without mouth, more individualized or abstract, are also well attested for in the large repertoire of limestone sculpture found at Göbekli Tepe (Figure 6). Their treatment during the refilling events can shed some light on aspects of the use of masks during the PPN at this site.

Burial rites at Göbekli Tepe seem to have been applied to a part of a hierarchical system of anthropomorphic depictions. The enclosures’ central pillars are abstracted and clearly characterized as anthropomorphic. The surrounding pillars are also stylized, but smaller and contain zoomorphic decoration. They are orientated towards the central pillars and evoke the association of a gathering. Naturalistic anthropomorphic sculpture, which may partly depict masked people, is smaller and intentionally fragmented. The stone masks are strongly related to this category through form and deposition treatment. During backfilling of the enclosures, a selection of fragments, mostly (masked?) heads, and complete masks, was placed inside the filling, most often near the central pillars. If we assume that the stone masks are miniature or supra-sized representations of real organic masks actually worn, they could well attest that ritual activity at Göbekli Tepe and other sites included masquerade to the point where people became an active part within this complex mythology.

During the early Neolithic in the Near East, masks and masking possessed a significant role in rituals re-enacting mythological narratives closely related to death, taking place at sites with special purpose buildings and a noticeably rich iconography. This importance apparently justified the time-consuming and complicated manufacture of these praraphernalia as well as miniature and larger-than-life-sized representations of these items. A small amount of possible mask depictions in stone are all what remains of a presumably manifold Early Neolithic tradition of ritual masquerade.