Emblematic signs? On the iconography of animals at Göbekli Tepe

Göbekli Tepe was once called „a Stone Age zoo“ by its late discoverer Klaus Schmidt. This judgement is certainly appropriate, as the range of animals depicted is impressive. Bears, boars, snakes, foxes, wildcats, aurochs, gazelle, quadruped reptiles, birds, spiders, insects, quadrupeds, scorpions and many more are inhabiting the enclosures. But there is also some underlying structure to this zoo-like ensemble. 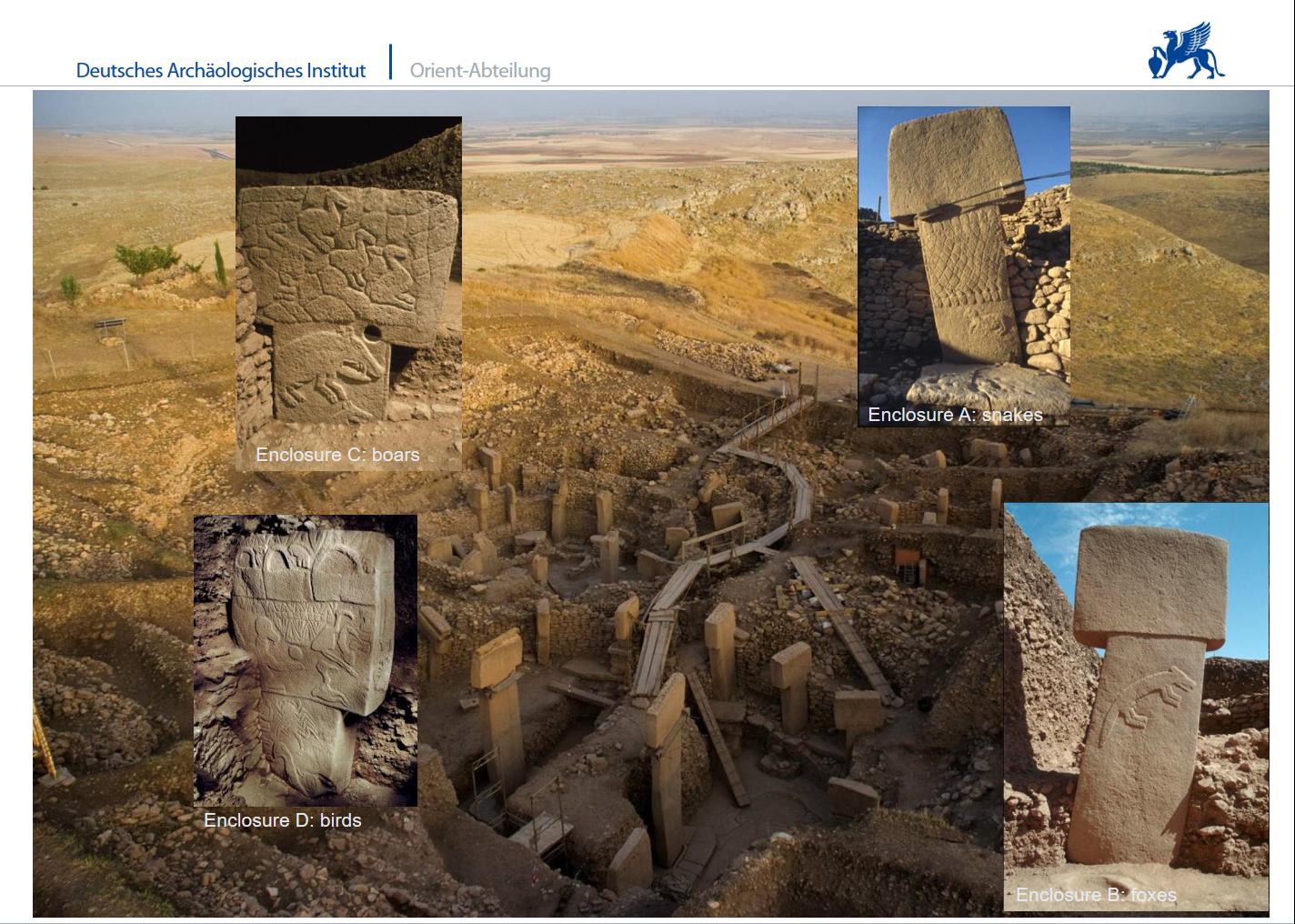 The enclosures in the main excavation area with their prevalent animal species (several photographers, copyright DAI).

The enclosures of Göbekli Tepe show a variation in the animal species depicted prominently in the iconography of each circle. While in Enclosure A the snake prevails, in Enclosure B foxes are dominant, for example. In Enclosure C boars take over and in Enclosure D birds are playing an important role. Interpreting these differences as figurative expression of community patterns could probably hint at the different groups building the particular enclosures. Distinct enclosures may have served different social entities. The character of these entities remains open to discussion at the moment. There are some clues however. Restriction of the access to knowledge and participation in rituals seems to be attestable at Göbekli Tepe. On a general level, some object classes known from settlements are missing (Schmidt 2010, 70). For example, awls and points of bone are nearly completely absent. The tasks carried out with them probably were not practiced here, and it may well be that the part of the population carrying them out was absent, too. Further, clay figurines are absent completely from Göbekli. This observation gains importance in comparison to Nevalı Çori, where clay figurines are abundant, missing only in the ‘cult building’ with its stone sculptures and T-shaped pillars (Hauptmann 1993, 67; Morsch 2002, 148). Clay and stone sculptures may thus well form two different functional groups, one connected to domestic space (and cult?) and one to the specialized ‘cult buildings’ – and to another sphere of ritual also evident at Göbekli Tepe. Its iconography is exclusively male, and while evidence for some domestic tasks is missing, there is evidence for flint knapping on a much larger scale than in any contemporary settlement, and shaft straighteners are very frequent, too. Göbekli Tepe could have been a place for just a part of society, for male hunters. At least their ideology is exclusively represented at the site. But does that mean that all male hunters had access to the site? An answer is again hard to find, but another element of restriction is posed by the enclosures themselves. They are not of a size to accommodate very large groups of people at a time. If we imagine them open to the sky, then a certain public aspect would have to be taken into account, but another possibility is a reconstruction along the lines of largely subterranean buildings accessible through openings in the roof, similar to the kivas of the North-American Southwest, rather unimpressive and hidden from the outside. It is a distinct possibility that only a small group of people or ritual specialists had access to the enclosures. Taking into account the fierce and deadly iconography of Göbekli Tepe´s enclosures, male initiation rites including the hunt of fierce animals and the symbolic decent into an otherworld (especially if the enclosures really were roofed), symbolic death and rebirth as an initiate could have been one purpose of rituals at Göbekli Tepe.

Morsch, Michael, Magic Figurines? Some Remarks about the Clay Objects of Nevalı Çori. In Magic Practices and Ritual in the Near Eastern Neolithic. Proceedings of a Workshop held at the 2nd International Congress on the Archaeology of the Ancient Near East (ICAANE) in Copenhagen 2000, edited by Hans Georg K. Gebel, Bo Dahl Hermansen and Charlott Hoffmann Jensen (Berlin 2002) 145–162.