Of animals and a headless man. Göbekli Tepe, Pillar 43

Addressing an earlier question from the comments, here is some more information on one of the most impressive pillars from Göbekli Tepe, Pillar 43 in Enclosure D.

Updated 05/03/17 with some more information on our views of the spherical object above the vultures wing for that reason.

Some images on Göbekli Tepe’s pillars indicate a  narrative meaning. One striking example for this is Pillar 43 in Enclosure D. The whole western broad side of this pillar is covered by a variety of motifs. Dominant is a big vulture. It lifts its left wing, while the right wing points to the front. It is possible that this gesture aims at the sphere or disc that can be seen above the tip of the right wing. But to the right of the vulture another bird, maybe an ibis or a young vulture is shown.  If we take this image as a depiction of a young bird, then the stretched-out wing of the vulture could be a gesture of protection, and the sphere could be the egg the young bird hatched from. Another possibility would be a depiction of the sun or the moon. However, the scenery could also mean something completely different, as we will see below. 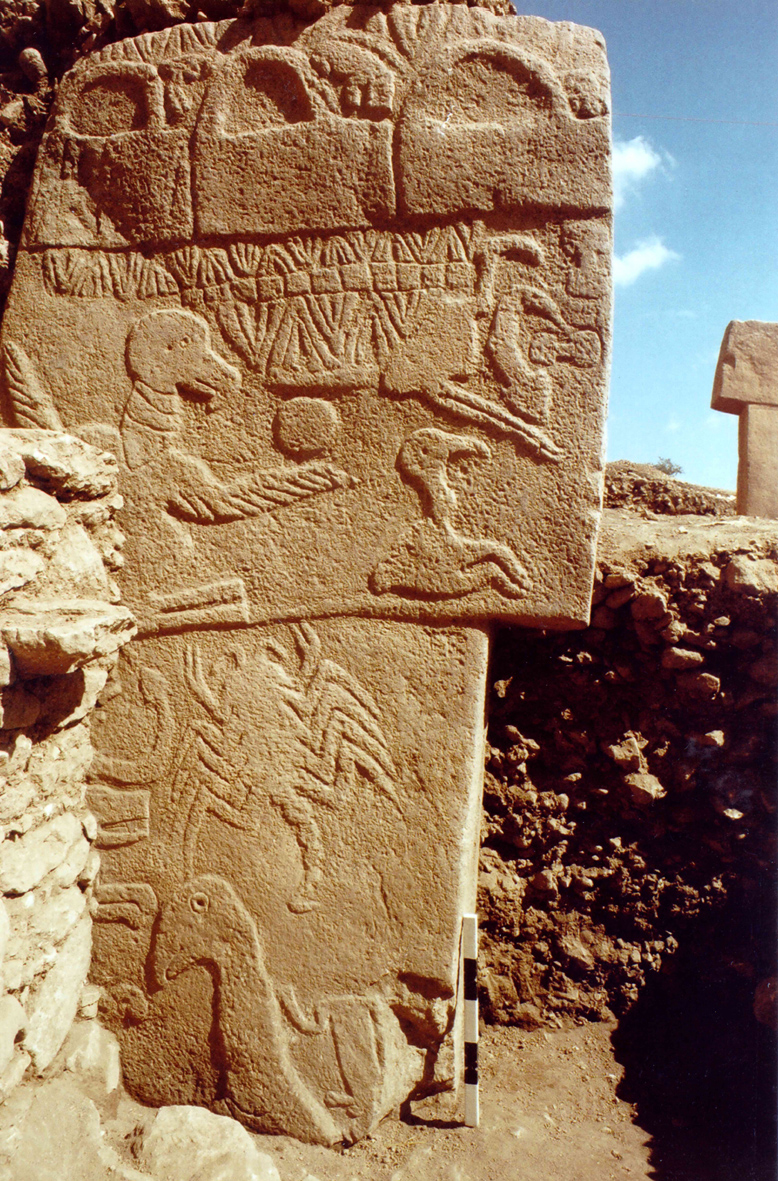 To the right above this scene, a snake, two H-shaped symbols and wild fowl are depicted. On the pillar’s shaft, a huge scorpion as well as the head and neck of another bird are dominating the scene. While some more reliefs to the left of the scorpion and the bird are hidden by the perimeter wall, to the right of the bird’s neck an especially interesting motif is depicted. Due to damage to the pillar it is not preserved completely, but the representation of a headless human with an erect penis is quite clearly recognizable. The depiction seems to relate to aspects of Early Neolithic death cult known from several sites and offers another interpretation for the spherical object aboive the vultures wing: it could be the depiction of the person’s head. But even without giving too much weight to this aspect of the pillar’s reliefs, it is clear that the intention behind the imagery goes well beyond depicting nature.

On the uppermost part of Pillar 43, a row of three rectangular objects with cupola-like ‘arches’ on their tops can be seen. Every one of these objects is accompanied by an animal added on the ’arch’. The meaning of these images is hard to guess, but they might represent the enclosures during their time of use, seen from the side. The rectangular part would represent the perimeter walls, while the cupolas may indicate roofs. As usually depictions of one animal species seem to dominate in every enclosure, it is an intriguing thought that buildings of different groups are depicted here with the emblematic animals of these groups added for recognition. Following this line of argument, one would also have to assume that the enclosures were depicted here rather schematic in an almost technical sectional view – what would be highly unusual compared to the other naturalistic representations from Göbekli Tepe. A final decision on the meaning of these images is not possible at the moment.

On the interpretation of the disc-shaped object: