Enclosure A, a short overview

During the first field season at Göbekli Tepe in 1995 one of the landowners had started to clear his field in the southeastern depression of stones that hindered ploughing. He dug out the heads of two large T-shaped pillars and had already started to smash one pillar with a sledgehammer. Fortunately he could be persuaded to stop, and in the 1996 work started in this area. What came to light here was the first of the monumental buildings of Göbekli Tepe’s older layer (Layer III), later called Enclosure A.

The ground plan of Enclosure A appears more rectangular than round. First radiocarbon data suggest that it may be a little younger than other Enclosures, C and D, and maybe the rectangular shape already could indicate the transition to the later, rectangular, Layer II building type. The existence of different outer walls may as well hint at a longer building history and possible alteration over toime. However, Enclosure A is still not entirely excavated, so any description must remain preliminary as of yet. 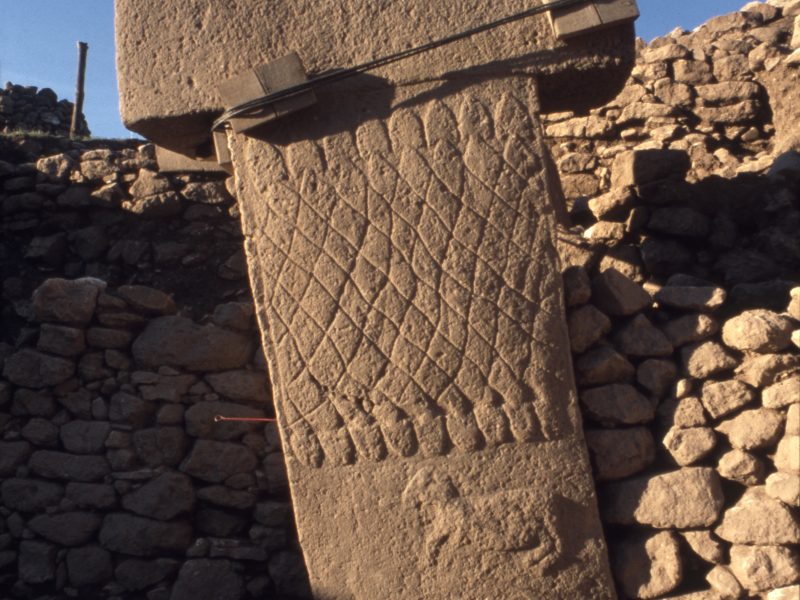 Pillar 1 in Enclosure A shows a net-like pattern formed of snakes and a ram (Photo: C. Gerber, coopyright DAI). 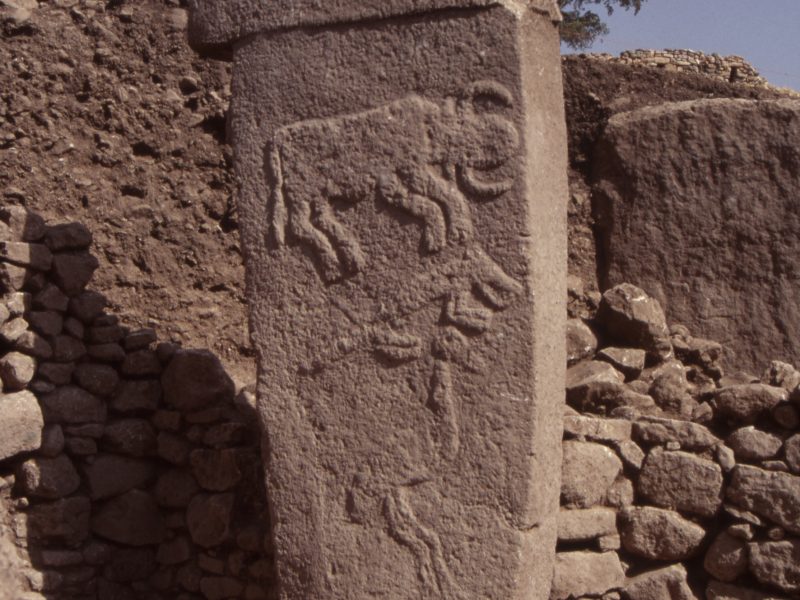 Pillar 2 in Enclosure A with a vertical sequence of three motifs: bull, fox and crane (Photo: C. Gerber, copyright DAI).

Pillars 1 and 2, the central pillars of Enclosure A, were excavated down to the level of the stone bench leaning against the inner walls of the building. Both pillars are richly adorned with reliefs. Particularly striking is a net-like pattern, possibly of snakes, on the south-western side of Pillar 1. The front side of this pillar carries a central groove running vertically from below the head to its base, covering about one third of its width. This groove and the raised bands to either side are decorated with five snakes in bas-relief. Maybe this is a depiction of a stola-like garment which is similarly known from other pillars as well. Pillar 2 carries on its right side a vertical sequence of three motifs: bull, fox, and crane. Its narrower back side is adorned with a bucranium between the vertical bands of another stola-like garment. Insights and experience gained in the last years, particularly with regard to typical motif-arrangement, suggests that Pillar 2 was not found in its original position, but was at some time moved to this, secondary, location. In the course of this action, the original back side of the pillar became its front and vice versa. Currently, the number of pillars surrounding the two central figures in Enclosure A lies at four, though it is expected that this number will rise once excavations are continued in this area. Pillar 5 shows a snake again, Pillars 3 and 4 are without reliefs. Pillar 17 was heavily destroyed already in prehistory, and is without reliefs so far, too. As with all the buildings of Göbekli Tepe’s older layer, one animal species seems to dominate the imagery of Enclosure A. In this case, it is the snake which appears noteworthy often.