Just don’t call it the Garden of Eden …

Sensations are making stories. And archaeology-stories apparently are no exception to this rule. That’s why even the most interesting sites and finds often are further dramatised and spiced up in public discourse. Somehow ‘interesting’ isn’t satisfying enough to everybody.

The early Neolithic site of Göbekli Tepe has it all: far reaching implications about prehistoric hunter-gatherer social group structures, the beginning of our very own modern sedentary lifestyle, and (some of the) oldest yet known monumental architecture ever built. However, this still doesn’t seem to be enough. People love a good mystery and apparently social structures of early hunters are (noted without any complaint here) not exactly enigmatic enough to be entertaining. 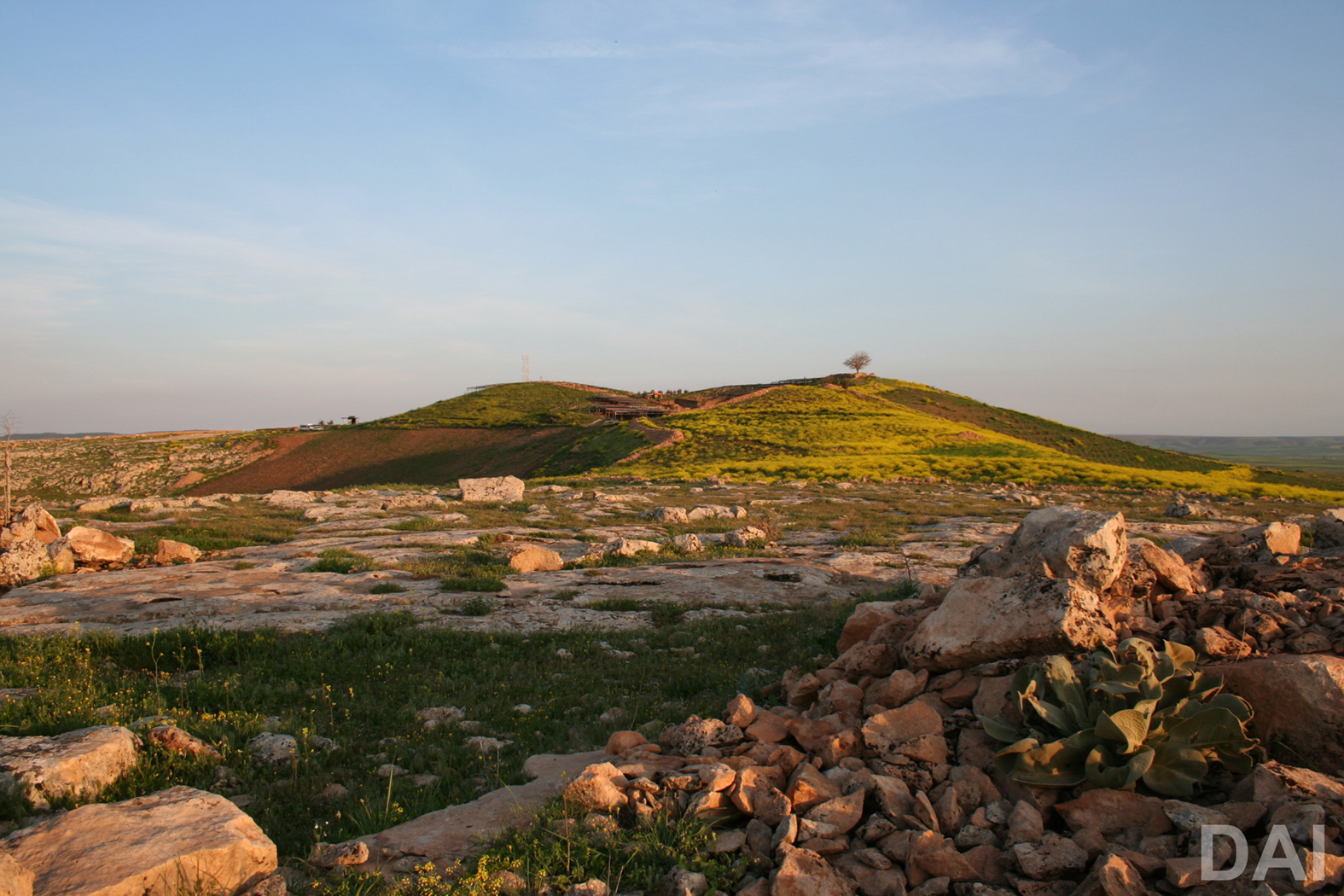 In 2006 German magazine DER SPIEGEL came up with a cover story on the Göbekli Tepe excavations (“Die Suche nach dem Garten Eden. Archäologen auf den Spuren des biblischen Paradieses” [external link]), suggesting it was the (pre-)historical basis for the Biblical narrative about the ‘Garden of Eden’. Ever since this story multiplied and was picked up then and again, actually emphasising the great interest in our research on one hand, but also the pitfalls of all too simplifying analogies on the other. Only recently Discovery’s Science Channel (which features, among others, a segment about our research at Göbekli Tepe) was digging up the story again (excuse the pun) for an episode of “What on Earth” called “Gateway to Eden” [external link].

To be honest, it’s not even hard to actually see where this fascination is coming from. A mythical garden, ‘paradise’ par excellence, is quite an archetypical narrative and a metaphor deeply rooted in our collective memory. The story of that ‘Garden of Eden’ seems to have great potential to fuel our imagination. Yet actually looking beyond that metaphor for a real place and location would mean to somehow misconceive the whole narrative’s elucidating intention.

Since there are a number of peculiar elements brought up repeatedly in support of an assumed link between the Göbekli Tepe findings and the Eden myth, it seems worth the time having a closer look into and a short evaluation of these arguments in the course of this blog post.

The topographical situation of this idyllic garden delivered in the Old Testament (which, as probably most people would agree, is not exactly and specifically a proper historical source) tells of a river flowing from Eden, dividing into four streams: Pishon, Gihon, Tigris, and Euphrates (Genesis 2, 10-14). While the latter two are well-known toponyms in the region to this day, the other two however don’t really fit into the picture, somehow raising the suspicion they might be as figuratively as the mythical gold-land of Havilah through which the Pishon is said to wind. Besides, there are no water sources at Göbekli Tepe at all (actually one of the arguments against an ideal settlement situation, cf. this discussion). Göbekli Tepe hardly ever was a flourishing garden in the literal sense. 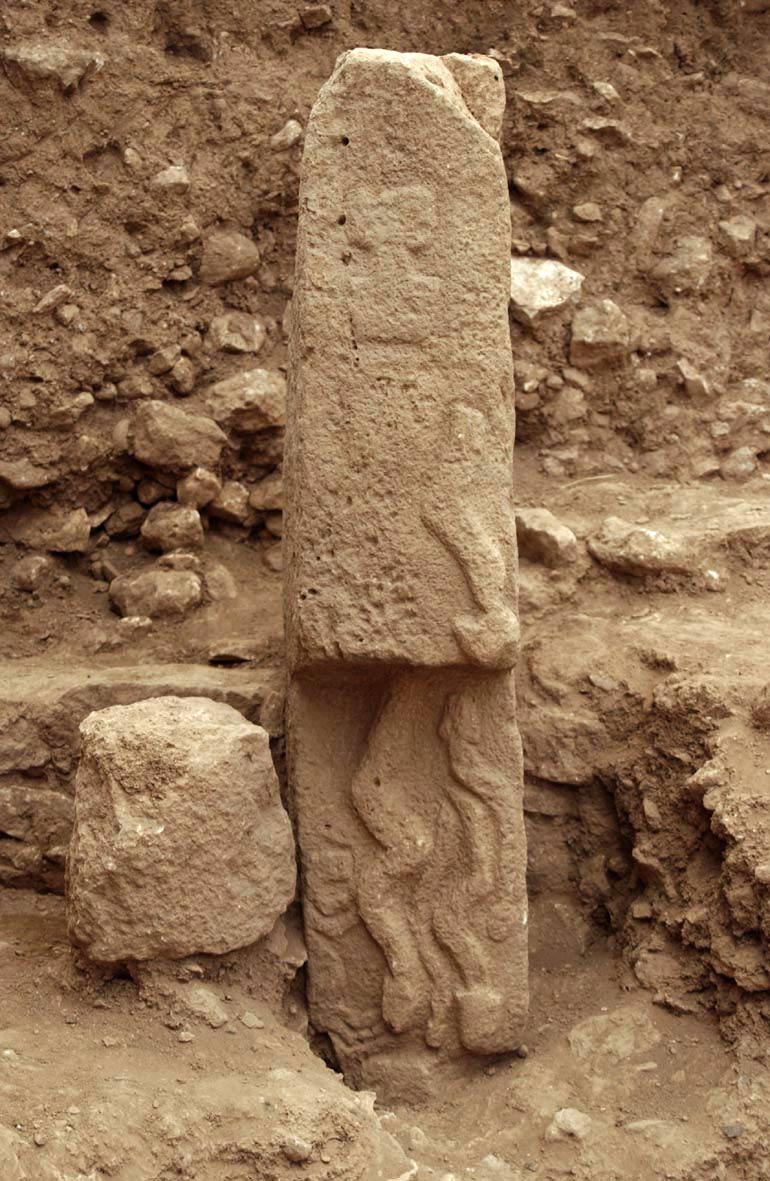 “But what about the snakes?” is an argument often put forward in favour of the Eden narrative. Yes, there are depictions of snakes at Göbekli Tepe. A lot, actually. Quite a lot. It almost is a snake pit rather than the single seducer trying to sell forbidden fruits. And what about all those other animal reliefs? There are spiders and scorpions, foxes and vultures, cranes, ducks, and boars. And more. In numbers certainly equalling those of  snake reliefs. So, this sole focus on the serpent seems a bit unfair towards the other animals. Are we going to ignore all these many additional animals (and few human depictions)  – or how do these fit into the story? 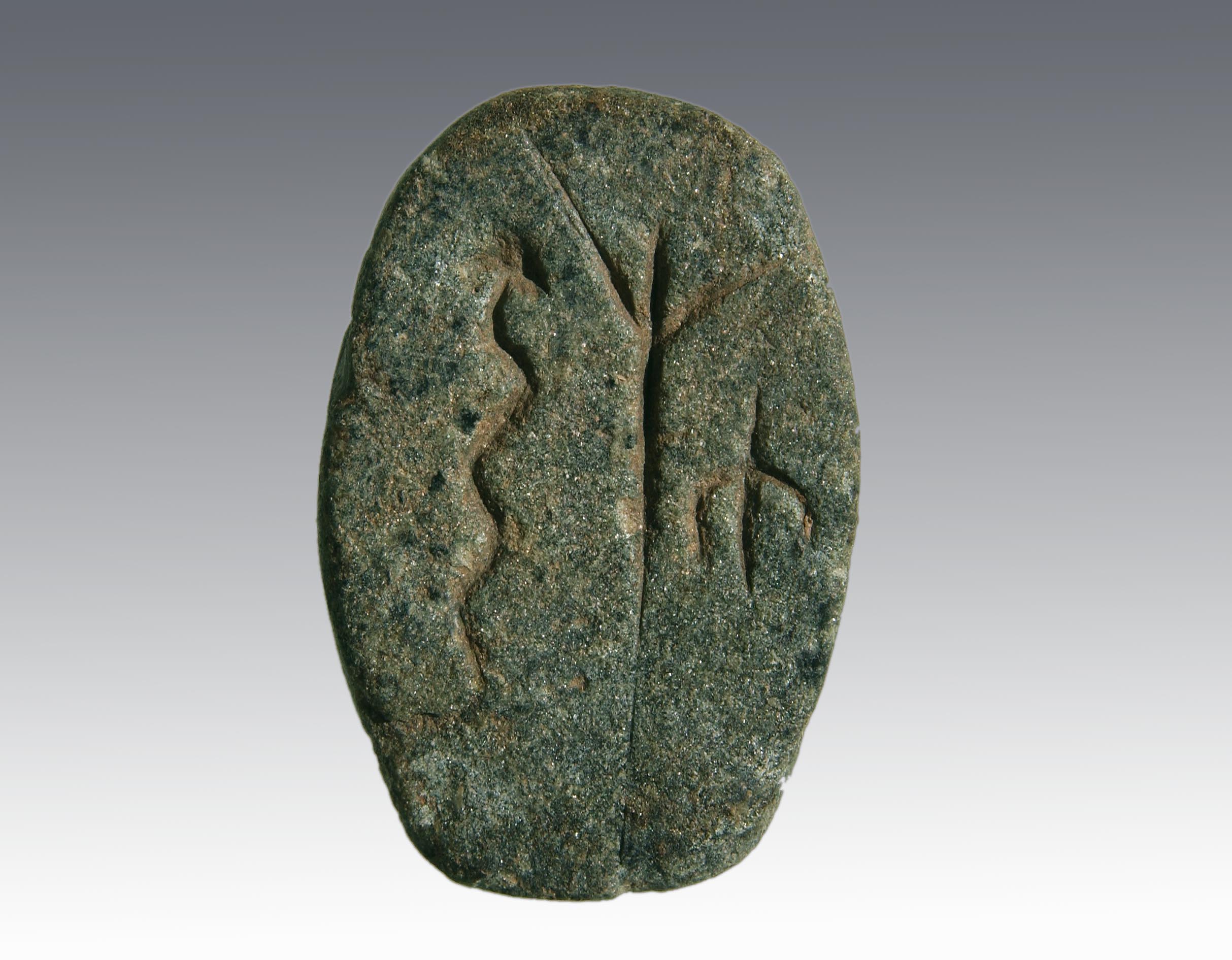 Plaquette with depiction of a snake, a human (?) and a bird (Photo: Irmgard Wagner, DAI)

Another small find produced by the Göbekli Tepe excavations, a so-called plaquette, is also often referred to as a clue in the ‘Garden of Eden’ line of argument. The small stone tablet is showing three carved symbols among which some recognise a snake and a tree (and we all can see where this would be heading). However, with a view to the recent discussion of the ambiguity of prehistoric art and the challenge to properly ‘read’ (let alone understand) it here, this particular find seems a weak advocate. Upon closer inspection of Göbekli Tepe’s iconography and its analogies from other sites, it becomes much more likely that the ‘tree’ actually might depict a person and the third object to its right may be understood as a bird – somehow changing the whole narrative of this object quite a bit.

Returning to that recent “What on Earth” episode, one could find the idea attractive that the remarkable pair of central pillars in each enclosure somehow could be interpreted as a mythical couple (even without the all too obvious ‘Adam and Eve’ analogy), some male and female ancestor. The show seems to suggest this, prominently quoting myself in this context. But – and this is the important point here, I  would like to make (and actually made in “What on Earth”, which somehow may have got lost on the cutting floor) – there are convincing leads showing that this is not the most favourable interpretation. The fact that both central pillars of Enclosure D are shown wearing belts and loincloths, for instance, seems to hint at two male individuals here – in analogy to contemporary clay figurines. 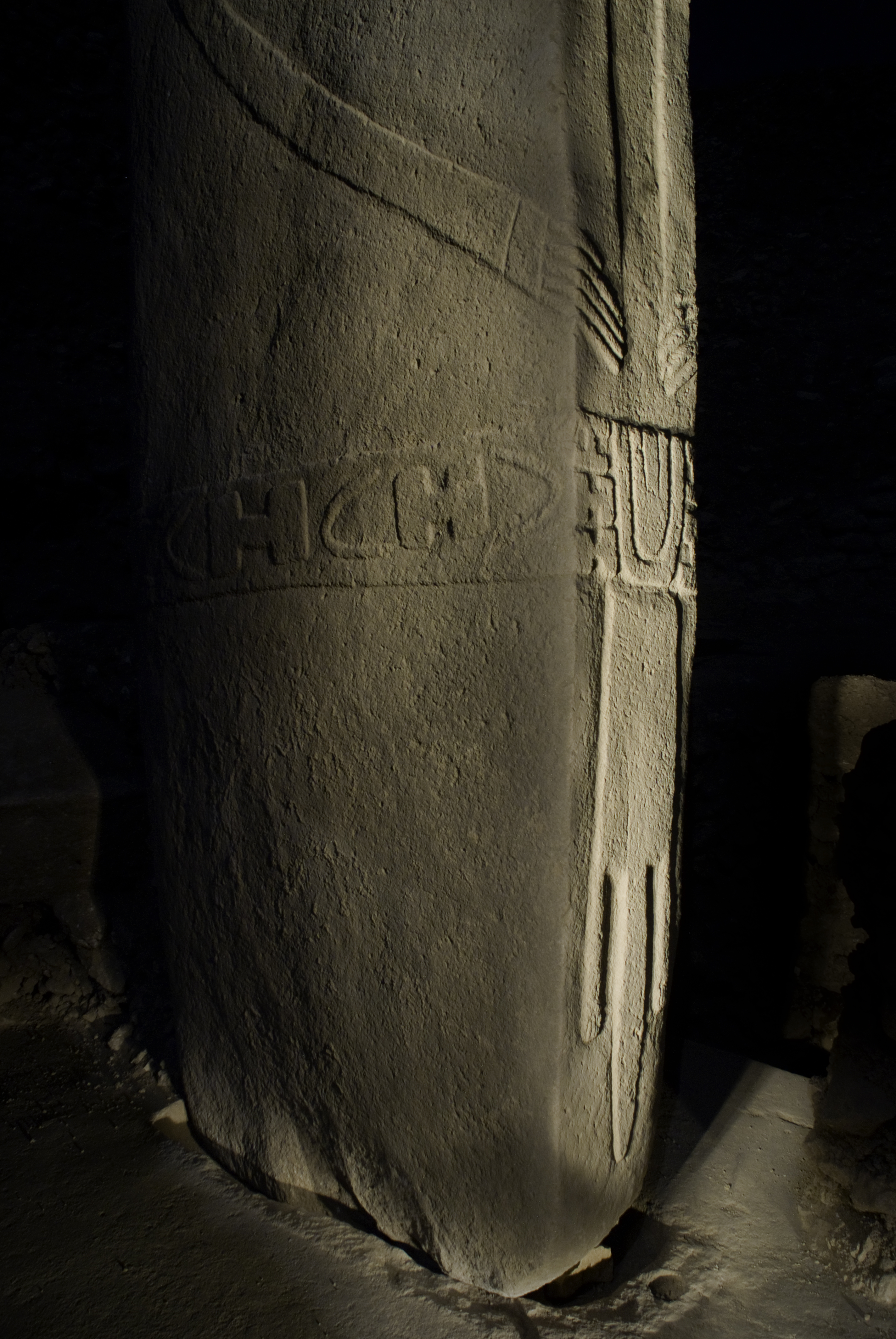 Belt and loincloth at one of the central pillars of Enclosure D underline the anthropomorphic appearance of the T-shaped pillars. (Photo: Nico Becker, DAI)

Projecting a much younger and much later mythology onto archaeological material predating it for millennia leaves any secure grounds for substantial conclusions. Linking the early Neolithic, 10th millennium BC, structures of Göbekli Tepe with a narrative written down not earlier then the 11th or 10th century BC (thus about 9,000 years later – after these enclosures were long abandoned and backfilled) would seem more than just a bit far-fetched.

As we already noted in our FAQ here:

“We disagree wholeheartedly with any parallels drawn between Göbekli Tepe and the ‘Garden of Eden’, for which there is absolutely no archaeological evidence. Certainly, Göbekli Tepe lies in a chain of hills north of the Harran plain, the scene of numerous biblical narratives, though this is where any associations with the Bible end. Anything more is pure conjecture.”

Or, as Klaus Schmidt once put it in an interview [external link]:
“Just don’t call it the Garden of Eden.”