What you get is … what you want to see: For example Göbekli Tepe on a 4th millennium seal print from Susa.

Recently, I stumbled upon a blogpost by Graham Hancock [external link]. I was looking for something completely different, i.e. the “fallout” of the rather unfortunate meteor theory proposed by two researchers from Edinburgh in April. What I found however sent me off in a completely different direction. As it is a prime example how false interpretations of images arise, and how they could have been prevented right from the start, I thought I should write a few words about that blog post here.

In his short text, Hancock explains that an independent researcher, while browsing the images in the online database of the ‘Cuneiform Digital Library’ [external link], found a depiction of the enclosures of Göbekli Tepe with their iconic T-shaped pillars. On a seal impression from Susa, dating to the Uruk V period. The settlement phase Uruk V constitutes together with Uruk IV the Late Uruk Period. The details of the absolute chronology of this period, which sees the invention of writing (i.e. proto-cuneiform script starting from Uruk IVa) and the cylinder seal, is still under debate, but a general date between 3500-3100 BC seems to be safe. Göbekli Tepe is currently dated between c. 9500-8000 BC. So, there is some chronological and regional distance between the sites (Susa lies in nowadays Iran). “Nice mystery here”, to cite Hancock. But let’s have a critical look at the evidence, which is always a good idea when doing science. 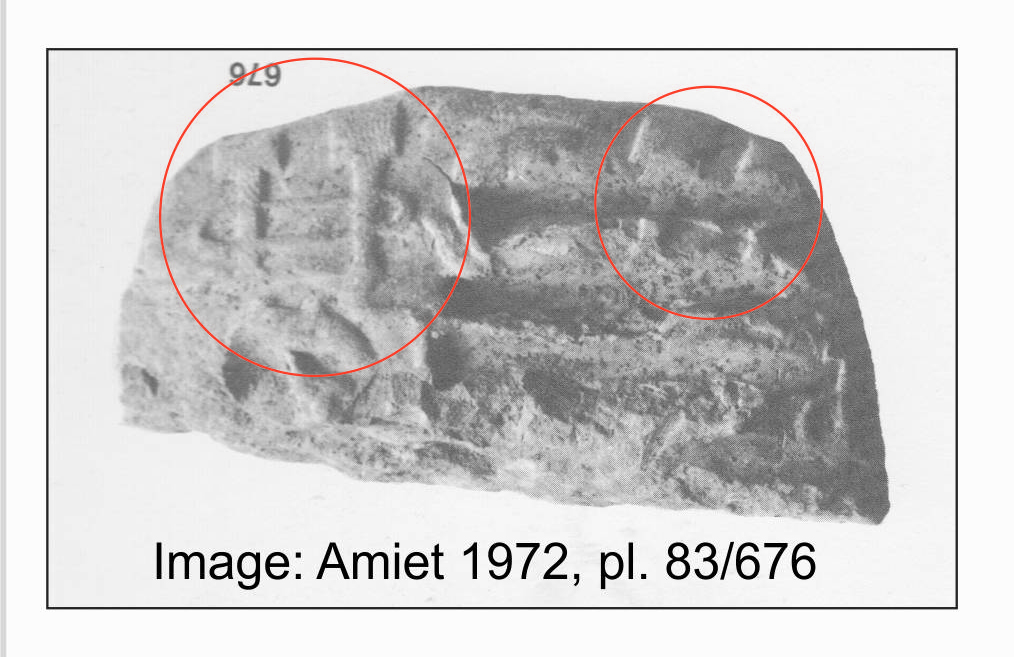 Hancock´s post refers to a fragment of a cylinder seal impression, for which the ‘Cuneiform Digital Library’ database gives a scanned black and white photo and some background information, like the material (clay), the collection (Louvre, Paris) and the primary publication (MDP 43, 676). It is also clear that the image is rotated – most likely accidentally – by 180° compared to the original publication (the number is upside down). And there they are, the two T-shaped pillars encircled by an oval, shown two times. A perfect abstract depiction of a round building from Göbekli Tepe´s older layer, as it seems. Alright, the pillars inside the perimeter wall are missing. But who cares? It could be an abstracted depiction of something a few millennia older but apparently still very well known.

The seal impression is fragmentary and highly damaged. It is obvious that the original image was more complex. If we turn the image correctly and look a little closer, in front of the left Ts, which now do not resemble Ts anymore, there is an indication of some more depictions that are hard to identify on the b&w photograph. That is why finds were and mostly still are drawn in archaeology, and in any case described extensively. And where to find a drawing and description of the find? In MDP 43 of course. 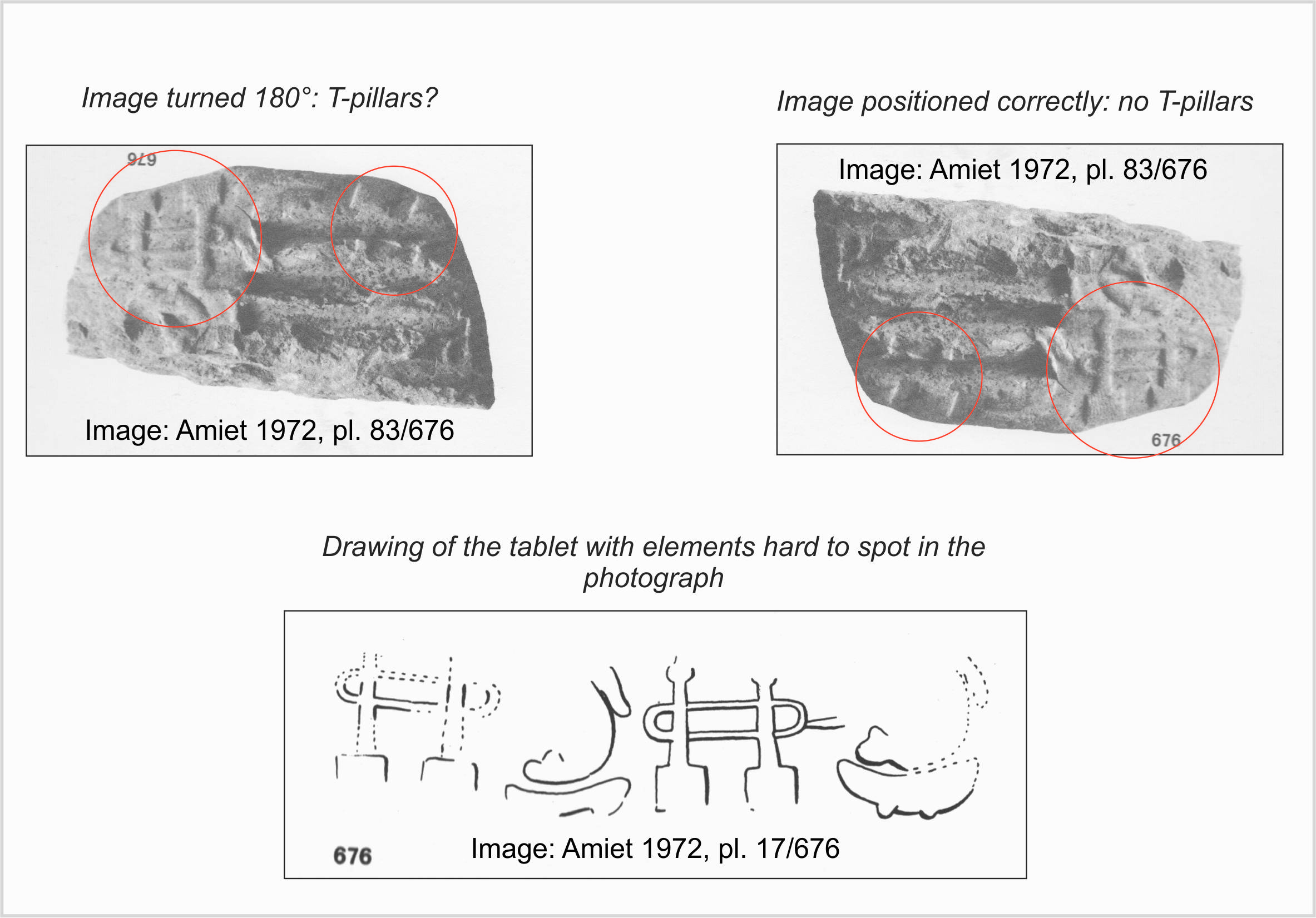 I perfectly understand that this is the point at which those with a general interest in archaeology and browsing through an online database might be lost. MDP refers to the series “Mémoires de la Délégation Archéologique en Iran”. Why the “P”? Because the series was first called “Mémoires de la Délegation en Perse” and the abbreviation never changed. If we look the find up in volume 43 of this series, written by Pierre Amiet and  dealing with “Glyptique Susienne”, the scene is described as “two figures sitting on the left, on curved seats, in front of apparatuses made up of two supports with square bases and an elongated oval element”. And the drawing of the sealing shows just that. The persons are touching this “oval element” with their hands. The publication has some more depictions of this kind on sealings, and at least some, such as MDP 43, nr. 673 or 674 are less fragmentary. It becomes immediately clear that we are not dealing with a depiction of T-shaped pillars, but of two supports with square feet at the bottom and a knob at the top, connected by an oval.

The depictions of people interacting with this “apparatus” are part of a group of sealings that shows people at work, and some of the images with the supports strongly hint in the direction of weaving (esp. nr. 673), the “oval” most probably being the depiction of a thread. 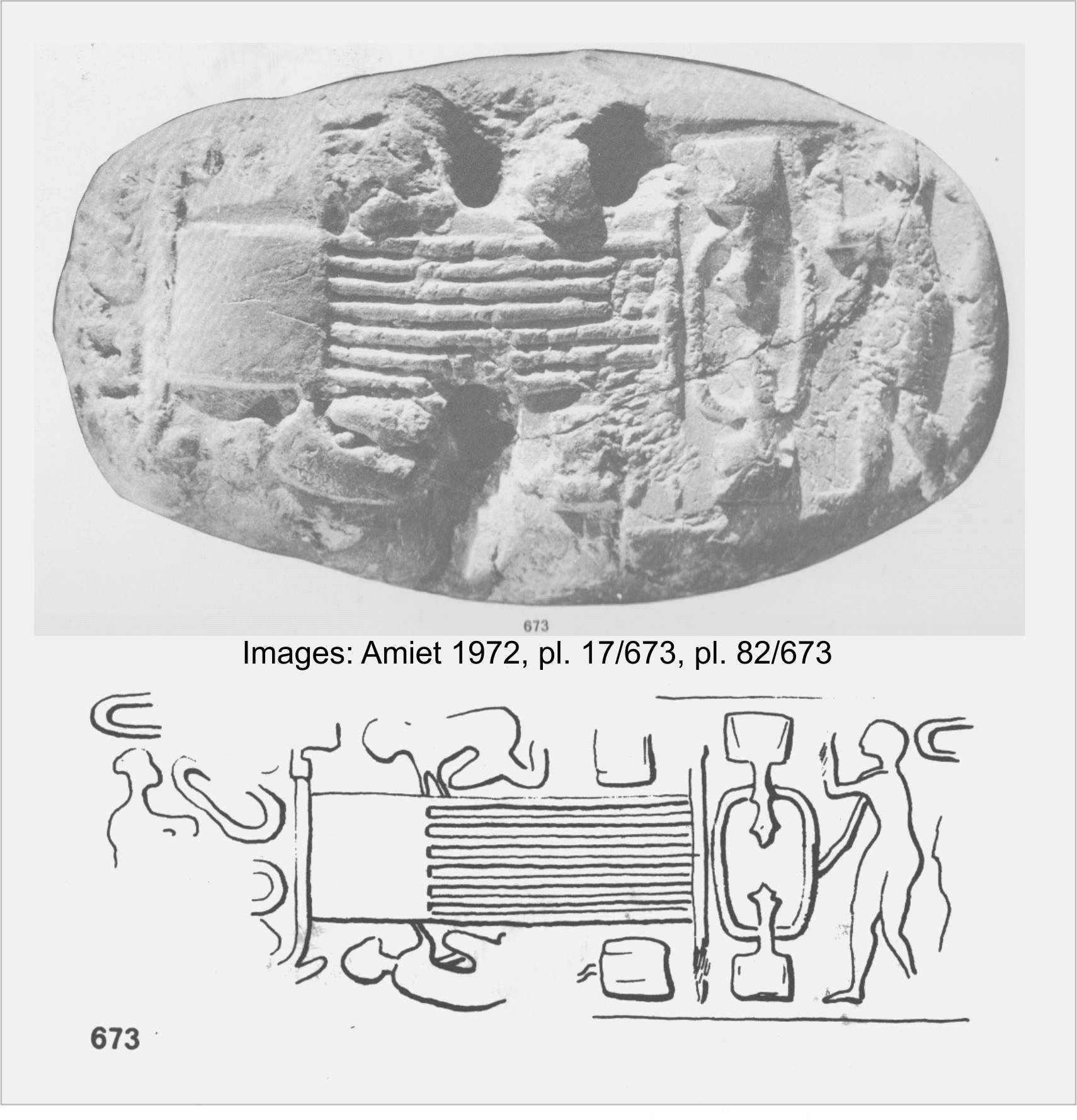 So, absolutely no “nice mystery here”. Just a misinterpretation of a highly fragmentary depiction. While dealing with prehistoric imagery things like that can happen quickly. Because the human brain interprets things in relation to former experiences and knowledge. In the case at hand, I have seen images of Göbekli Tepe´s round to oval enclosures with their iconic pair of monumental T-shaped pillars. Then I see two T-shapes on a scan of a b&w image of a highly-weathered fragment of a clay seal impression. And immediately make a connection between the two. Science starts when I challenge that superficial connection in the way described above with some simple questions that work not only in the case at hand:

So, finally: Why not ask an archaeologist, some of us are nice people willing to help!