This is a short version of the article: O. Dietrich, L. Dietrich, J. Notroff, A clay mask depiction from Göbekli Tepe. Neo-Lithics 2018/01.

During the 2001 excavation season at Göbekli Tepe, Enclosure D was in the focus of research. Excavations in area L9-78 soon revealed Pillar 18, the eastern central pillar of the building, as well as some of the pillars in the encircling enclosure wall. At the level at which the fox relief on Pillar 18 was reached, about 2.20m deep within the enclosure´s filling, a small stone object was retrieved in the pillar’s vicinity – the miniature representation of a mask made from limestone. But the next 10 cm of excavated sediment (i.e. Locus 4.7 in excavation area L9-78) held another surprise: a second mask, but this time made from clay.
The fragmentarily preserved object was originally ovaloid in form, the back is concave. It features a very prominent nose and large, nearly open-worked eyes. An indention supposedly depicting the mouth is rather small, on the other hand, and not very deep. The mask measures just 1.3×0.7cm. The surface is darkened-greyish, which indicates burning in reducing conditions. Whether the mask was intentionally burned remains uncertain; a future scientific examination of the find could resolve this issue. 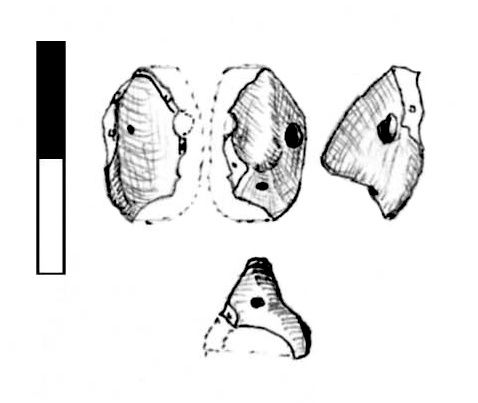 Context
Putting a clear date to the find is not easy as for Enclosure D a multifaceted history of backfilling through erosion and intentional events starts to be revealed by the still ongoing stratigraphic evaluation (Pöllath et al. 2018). The monumental round buildings had long biographies of use, and radiocarbon data may indicate a partial chronological overlap with the younger phase of site use, the rectangular buildings of the so-called Layer II. Within excavation area L9-78, the unit the mask was found in, Locus 4, marks the uppermost layer of the at least in modern times undisturbed Neolithic backfill inside Enclosure D. It was divided by a loamy layer with numerous small stones from the superposing unit, reddish in colour, with fist-sized stones and numerous lithic finds. The excavators described it as “heterogenous”, which may indicate a complex formation process. This layer can possibly be interpreted as the youngest event of the refilling of the enclosure, as after the excavation of this locus, color and composition of the sediment changed, probably indicating another, older backfilling event. Thus, the mask would have been deposited during the last stages of backfilling. The biography of use of the mask thus cannot be reconstructed in detail. However, we consider that a date for its deposition in the backfill not younger than the early PPNB probable.

The group of now five mask depictions leaves room for a wide range of interpretations. Are we dealing with personal, transportable mnemonic devices with a connection to possible ritual performances at the site? Are they insignia of participation in certain rites, of initiation? Other than different anthropomorphic representations, for example stone heads, which were regularly deposited deep in the filling next to the pillars , they do not seem to be linked to the initial biographies of the monumental enclosures, but rather to the final stages of use and their final backfilling. Y. Garfinkel has proposed three principal uses of masks, based on a review of ethnographic literature: performance masks, funerary masks, and protective masks. The last category comprises miniatures, not supposed to be seen by other people than the owner except for special ritual occasions and meant to ward off evil. It is certainly tempting to interpret the Göbekli Tepe mask depiction along similar lines, however, missing a clearer context, this remains speculative.