On the hunt, some 12.000 years ago: An aurochs bone with hunting lesion from Göbekli Tepe.

All archaeological finds of a site add to its history, but some can capture us with the underlying story. This is the case for an aurochs bone with an embedded flint projectile point fragment discovered during excavations at Göbekli Tepe some years ago.

That the aurochs was an important animal to these early Neolithic hunters becomes evident not only through the impressive number of its bones present in the enclosures’ filling (remains hinting at the consumption of enormous amounts of meat, most likely during feasts in the course of large-scale meetings and communal activities), but also due to its prominent role in Göbekli Tepe’s iconography (where recently the impressing depiction of what seems to be a dying or dead aurochs was reported).

In 2009, a humerus of an aurochs was found in the southwestern part of Enclosure D, more precisely in the last 10 cm of sediment covering the bedrock floor directly in front of the segment of the perimeter bench that connects Pillars 32, 33, and 38. Bones are frequent finds at Göbekli Tepe, and many of them can tell stories if ‘interrogated’ by archaeozoologists and archaeologists. But under closer examination, it became clear that this bone was special. It had the tip of the hunter’s arrowhead still embedded in it. 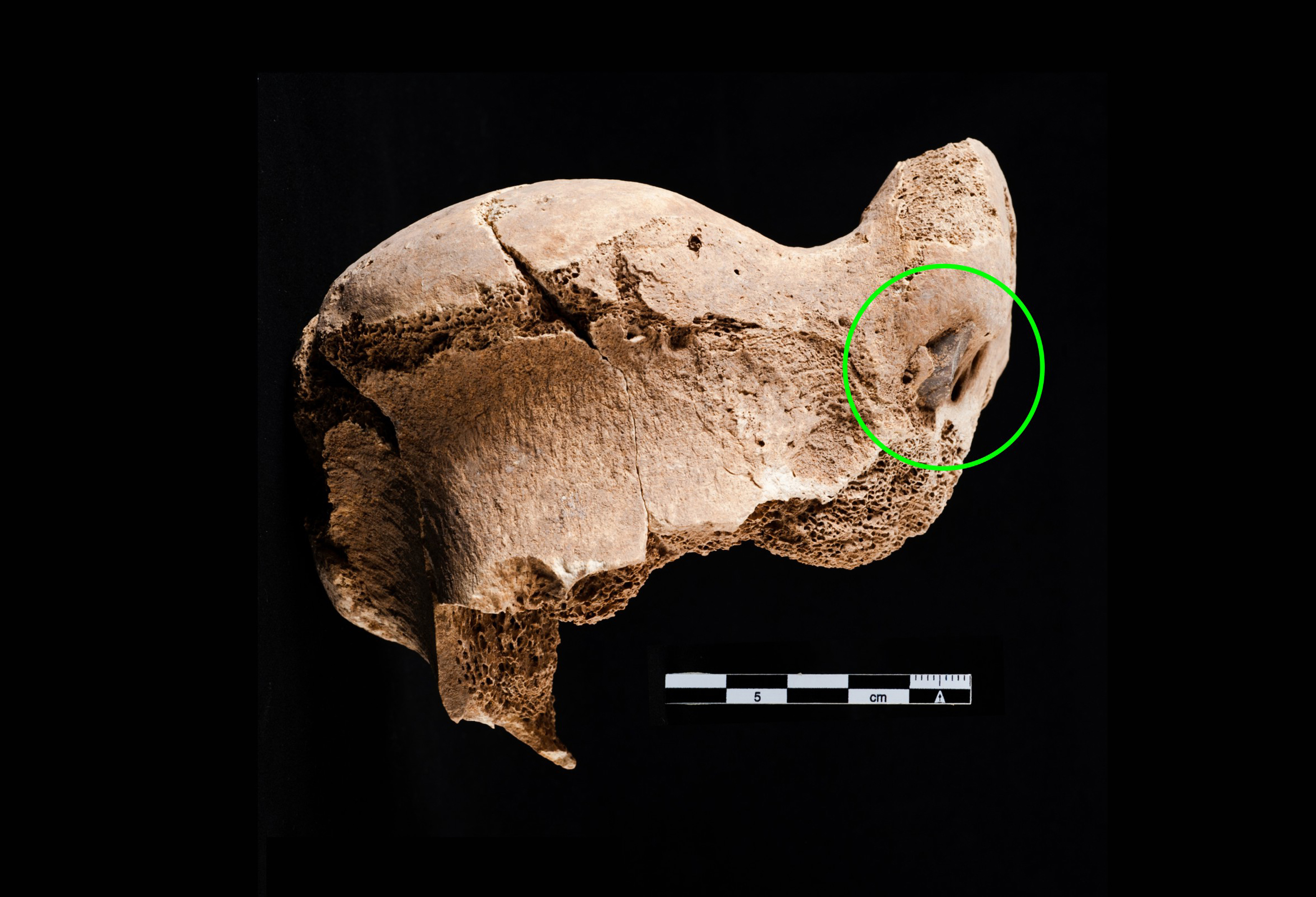 Hunting trauma in bones in general, and embedded projectile points in particular, are very rare finds. There are several reasons for this situation. The most important one probably is that hunters would aim for soft tissue to rapidly kill dangerous big game like cattle. The shot at the Göbekli Tepe aurochs thus has to be considered a miss from the Neolithic hunter’s point of view. But, as often, things that went wrong in prehistory hold the potential to be very informative for archaeologists (see Pompeii, for example). In this case, the bone offers the possibility to reconstruct a certain moment in time roughly 12,000 years ago. 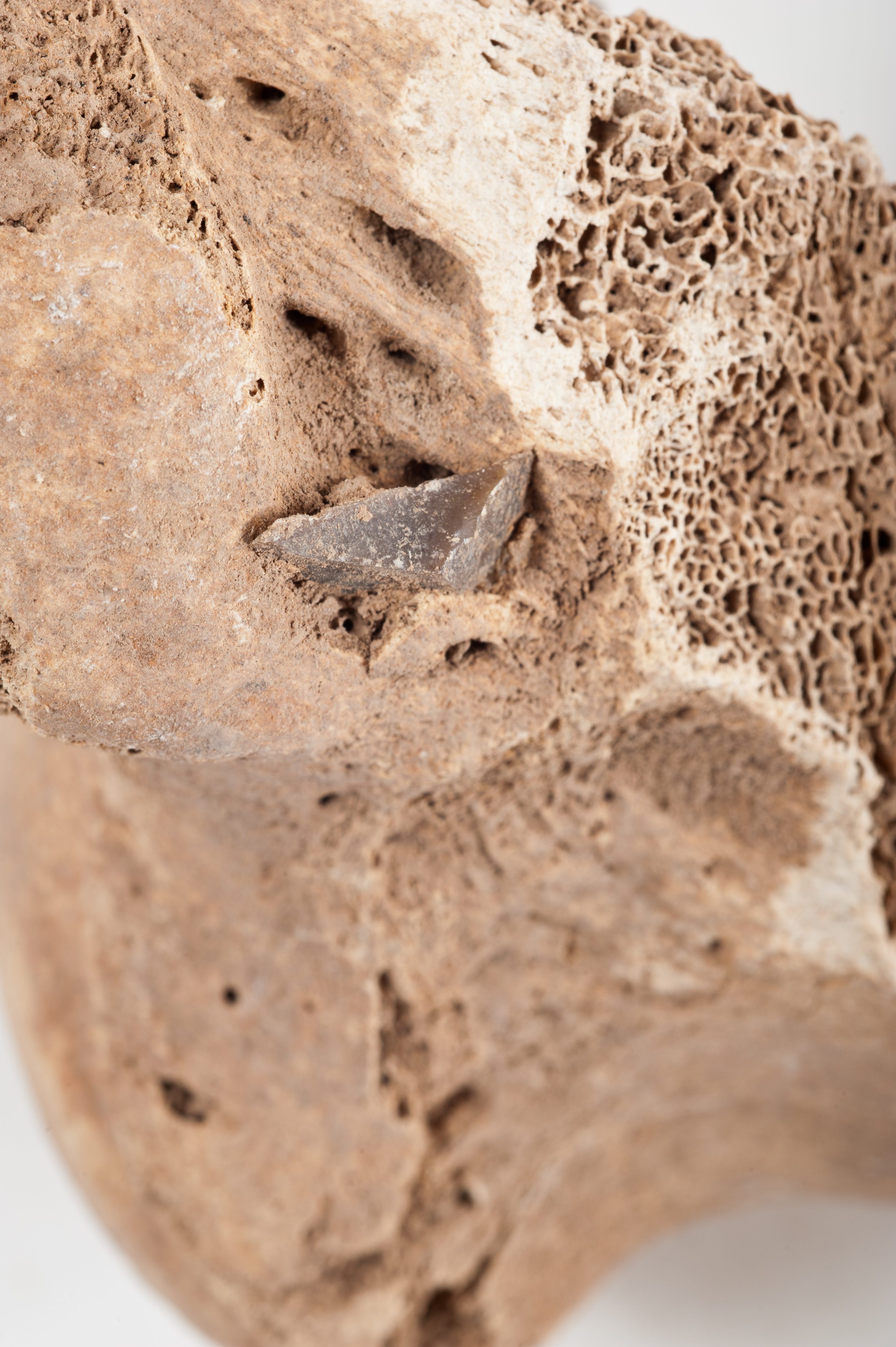 To do so, we have to examine the bone a little closer. First, there is some information to be gained about the unfortunate animal. The fused proximal epiphysis indicates an adult aurochs older than four years, while bone measurements illustrate that we are dealing with a cow. Put scientifically, the position of the point suggests that the projectile penetrated the Musculus cleidobrachialis and the M. infraspinatus, and probably also the M. deltoideus and M. triceps brachii covering the lateral side of the proximal humerus, and became lodged in the cranial part of the proximal epiphysis at the base of the Trochanter major, at an angle of about 90°. As such, the position of the tip indicates that the hunter must have stood to the right side or the right front of the animal and broadly at the same height. As shown by experiments and proven by ethnographical records, the maximum distance between hunters and big game prey is usually between 10 and 40 meters irrespective of using spears or bow and arrow. From distances larger than that, hit rates are low and all game within the reach would be on the run, if the first shot was a miss.

Hunters therefore try to get as near to the animals as possible. That the Göbekli hunters did not stand too far from his prey is also suggested by the fact that the impact was powerful enough to cut through the muscles overlying the humerus at this position and to get stuck in the bone. This shot was certainly not fatal but it at least impeded the animal. Since no traces of healing are visible on the damaged bone, it was hunted down soon after this hit. As mentioned, the shot can be considered a miss and was most likely aimed at the rib cage in order to hit the lungs and/or the heart – the most effective method when hunting middle-sized to large animals.

It is such finds that offer the rare opportunity to switch from sketching out the big lines of history to individual stories. Even if we do not have much more information on what happened exactly that day some 12,000 years ago, one can imagine how a group of hunters stalked the animal in the gallery woods surrounding smaller streams in the valleys around the Germus mountains. How they came face to face with the beast, maybe at a distance of no more than 10 m. How one of them aimed for the first shot, hit the large and dangerous animal, but not fatally. How others sprang to his aid to bring the angry opponent down. And finally, how the story of this particular hunt was retold for years at campfires.

More Information on this discovery can be found in the following article, available here (external link, text behind paywall):