The most notable feature of Göbekli Tepe are, of course, the monumental circular enclosures formed of T-shaped pillars dating back to the 10th millennium BC. The first of these structures were discovered early druring excavations from 1995 onwards in the mound’s southwestern depression which meanwhile became known as ‘main excavation area’. To clarify if this peculiar type of architecture was limited to this part of the site and discovered by pure chance, geophysical surveys were undertaken – indeed demonstrating that similar features could be found in other parts of the mound as well. Renewed excavations in particular in the northwestern depression (Fig. 1) started in 2011 produced a number of interesting related features of which one, Enclosure H, should be in the focus of this short report. 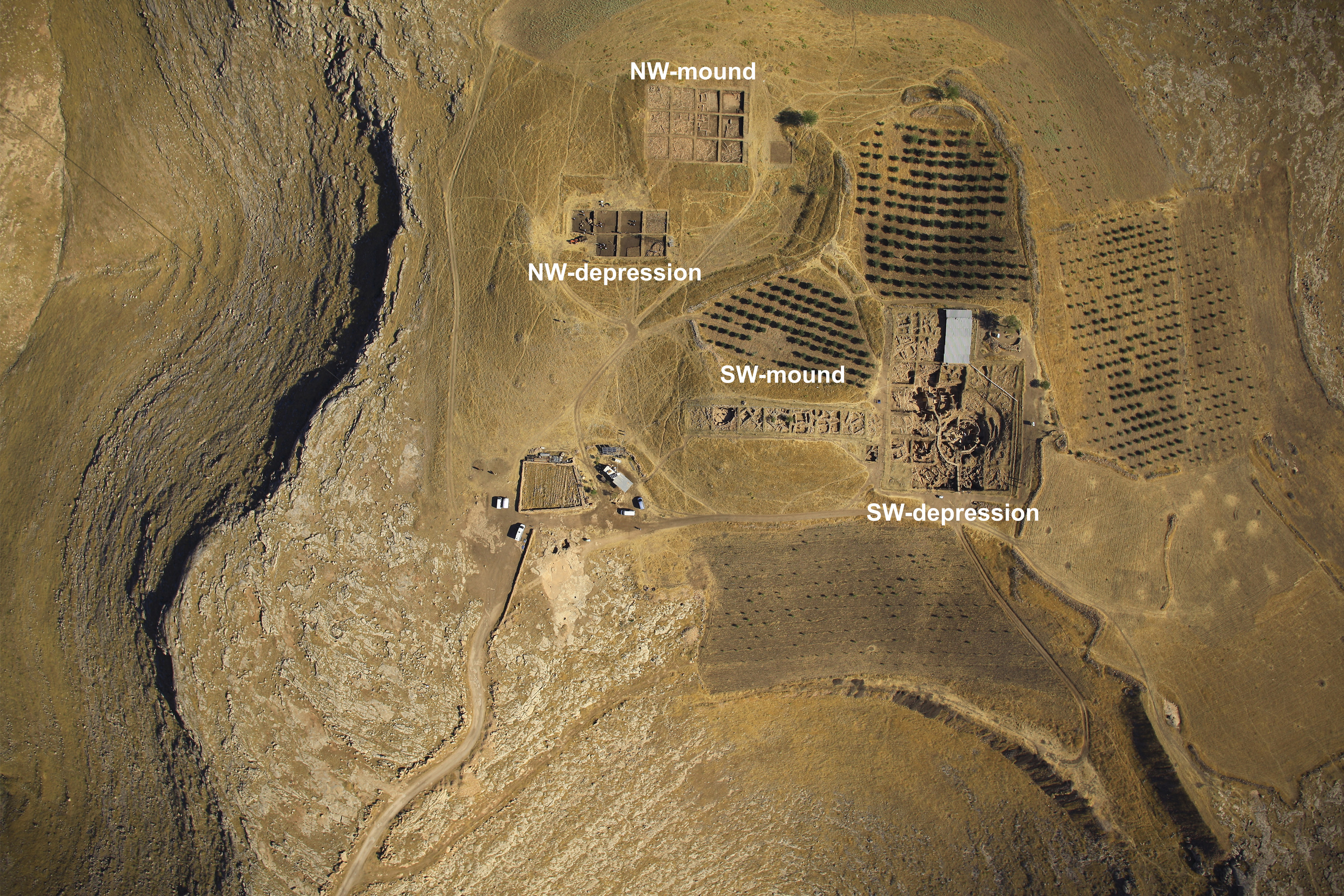 Georadar results already indicated a large, cloverleaf-shaped agglomeration of what seemed to be one or even more circular enclosures (Fig. 2). Excavations started in that area in 2011 soon revealed first T-pillars, confirming the existence of more monuments in this section of the tall as well. The structure which later would have been labelled ‘Enclosure H’ (in order of their discovery) could have been indeed located on the geophysical plan already as circular feature in the western part of the examined area (K10-24 and -25 as well as (partly) K10-35 and -35). 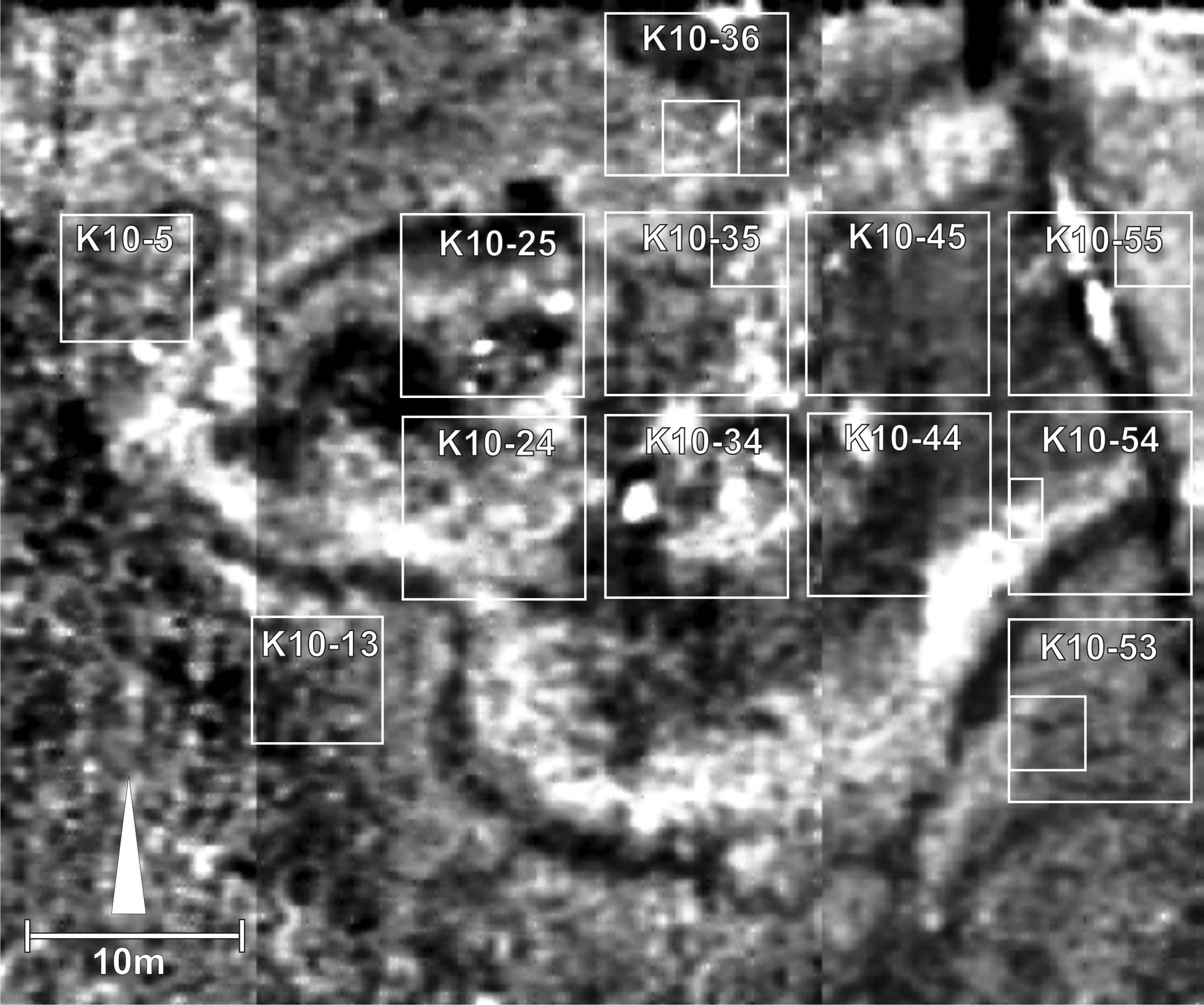 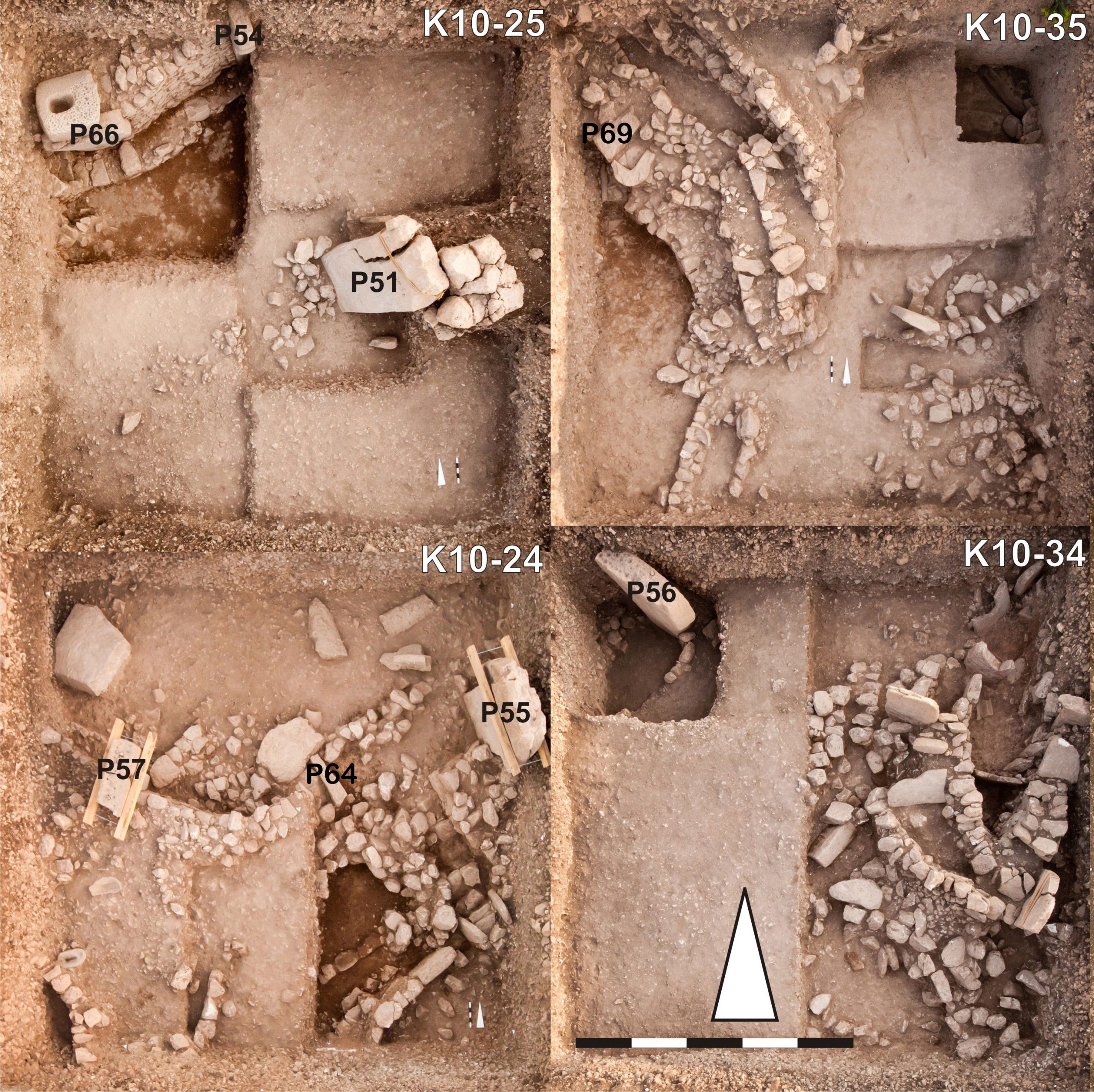 Although excavations are not completed yet, it can already be noted that it follows the general scheme and layout of the other known PPN A enclosures at Göbekli Tepe. In the course of following excavations eight pillars were discovered and excavated to this date (Fig. 3). 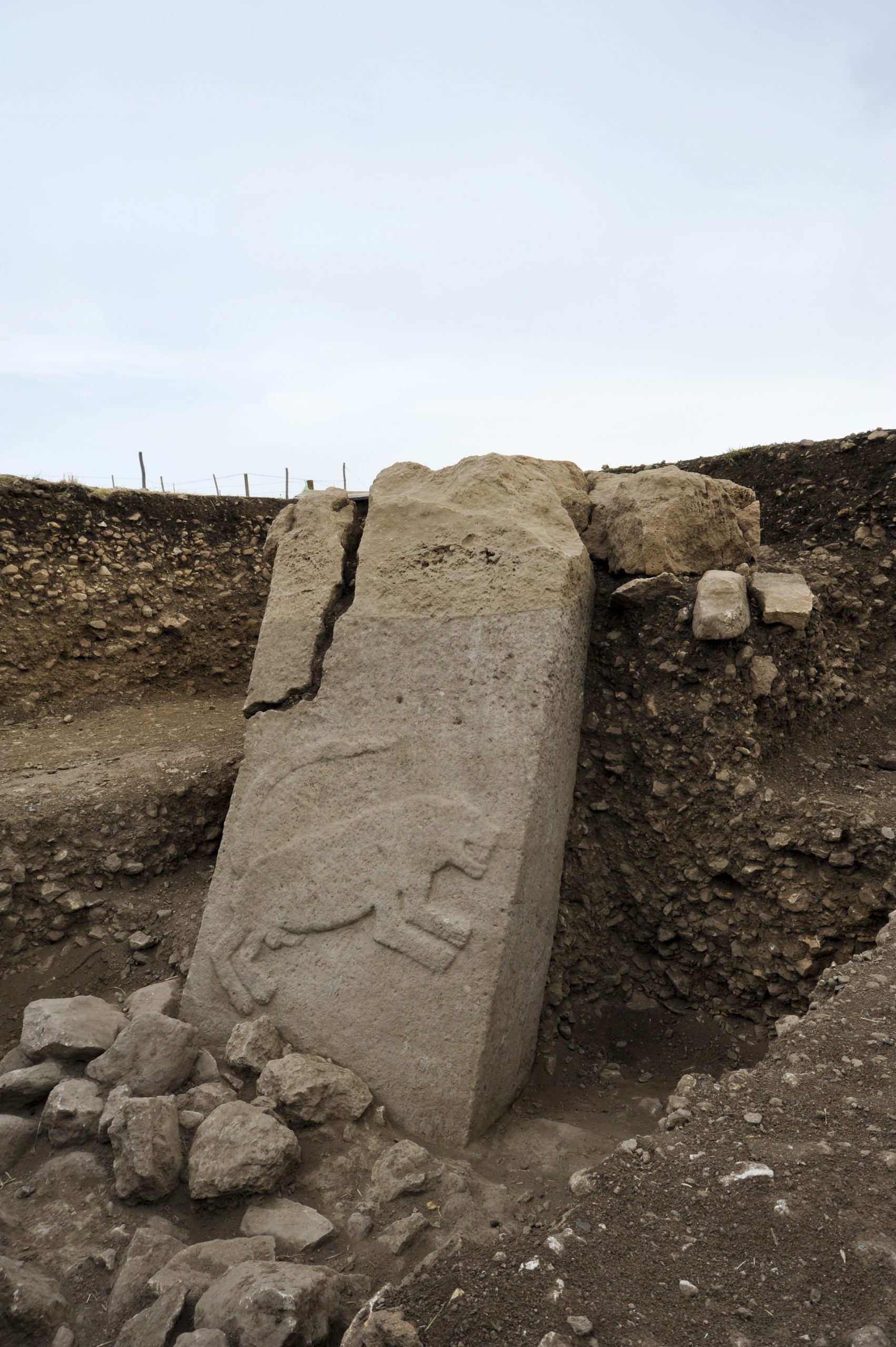 The eastern central pillar of Enclosure H, Pillar 51 (Fig. 4), was found close to the surface. While still in situ, the massive pillar was toppled over, its head heavily damaged (all fragments could be found and documented in immediate vicinity, however). The front side shows the characteristic stola-like depcition, the western broad side features the relief of a big cat which somehow resembles those animals known from the younger (Layer II) rectangular ‘lion pillars building’ in the main excavation area.

Pillars 54 and 55 in the enclosure’s northern respectively southern wall are partly excavated, also showing the ‘stola’-relief. The latter’s head being damaged as well (most likely due to frost weathering).

Pillar 56 (Fig. 5) is particularly notworthy due to its extensively decorated southwestern broadside – more than 55 animals are depicted so closely packed, that the outline of one merges with the contour of the next image. On the narrow front side a bucranium framed by two snaked can be seen. The northeastern broad side shows two very low lines which might indicate further reliefs here, but need to be clarified in the course of future excavations. 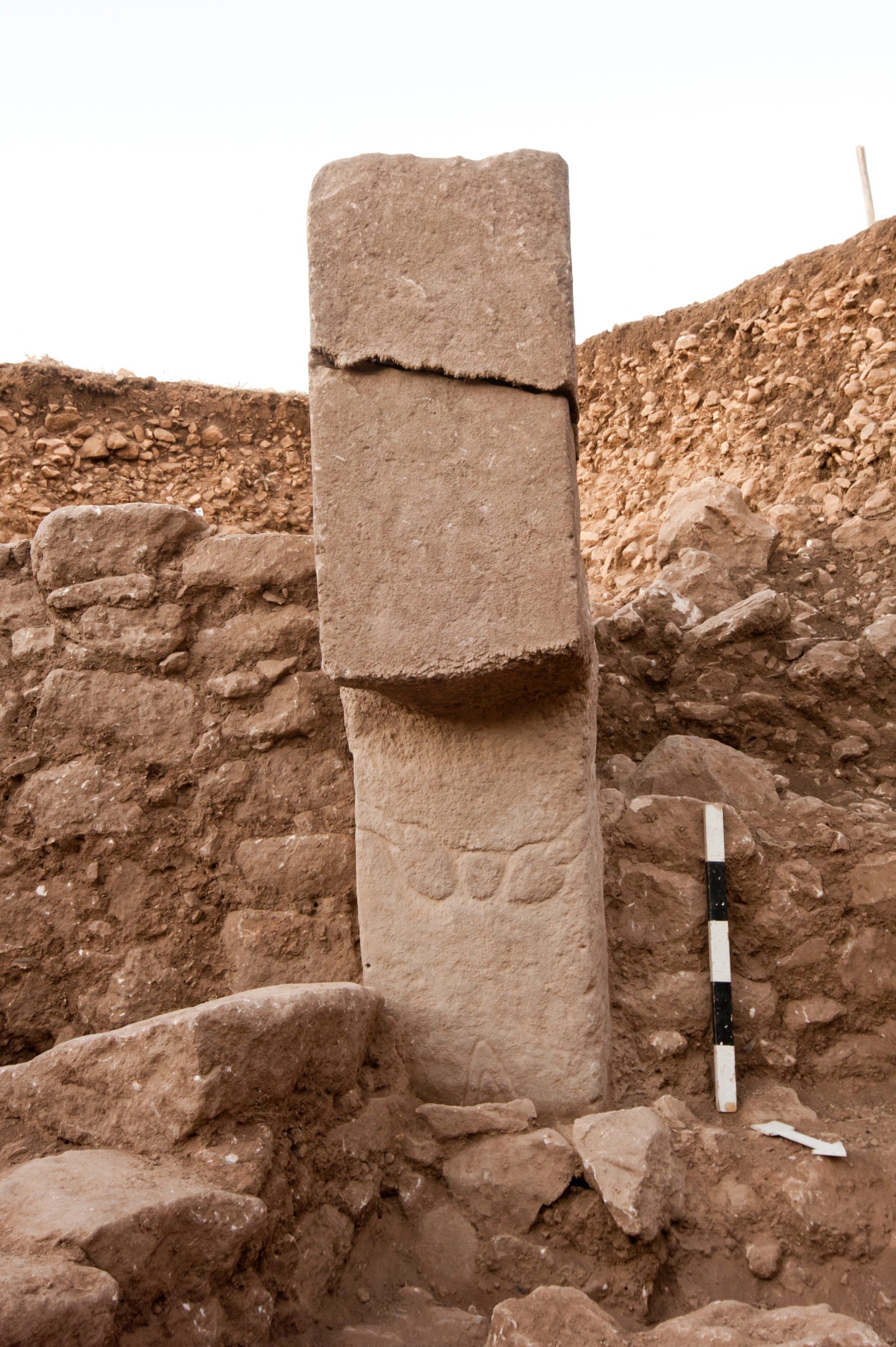 Pillar 57 (Fig. 6) is situated in the southern wall of Enclosure H. Its head is, probably due to frost weathering again, damaged. The front side shows the reliefs of two snakes (whose bodies seem to wind around the pillar) are facing each other and a round object. Underneath another carving can be seen; hardly identifiable it could be another snake’s head.

Of Pillar 64 there is only the basis left in situ, while another limestone fragment from its head was found nearby. 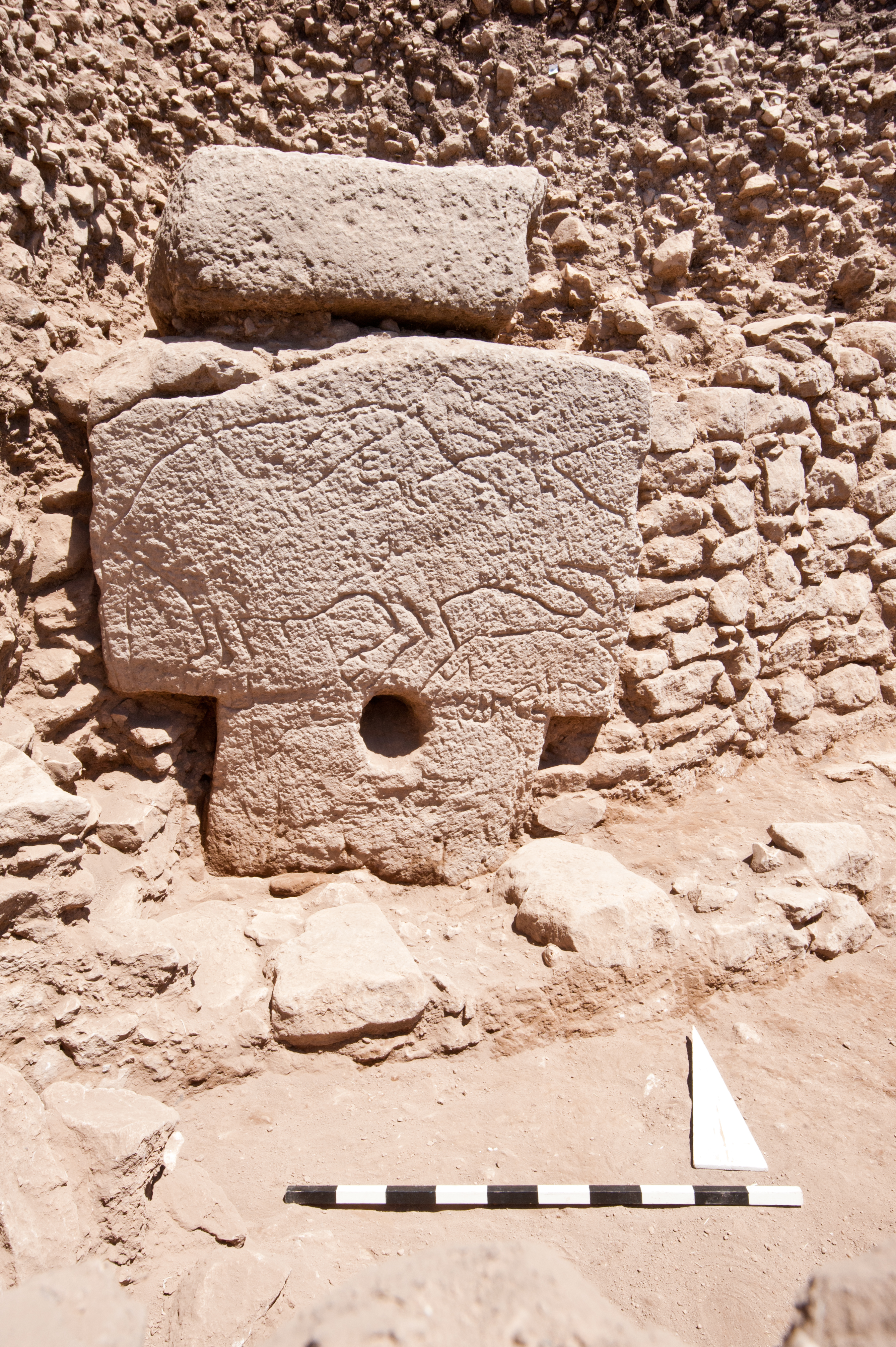 Pillar 66 (Fig. 7) is situated to the west of P54 in the northern part of the enclosure wall, but deviates from the expected radial orientation since it stands almost parallel to the wall. This unusual position may have to do with a possible secondary use of the pillar here; something which was also already brought up for Enclosures B and C in the main excvation area. The pillar’s head depicts a large horned animal (maybe an aurochs or stag) with bent legs and hanging out tongue, maybe indicating the death of this animal. 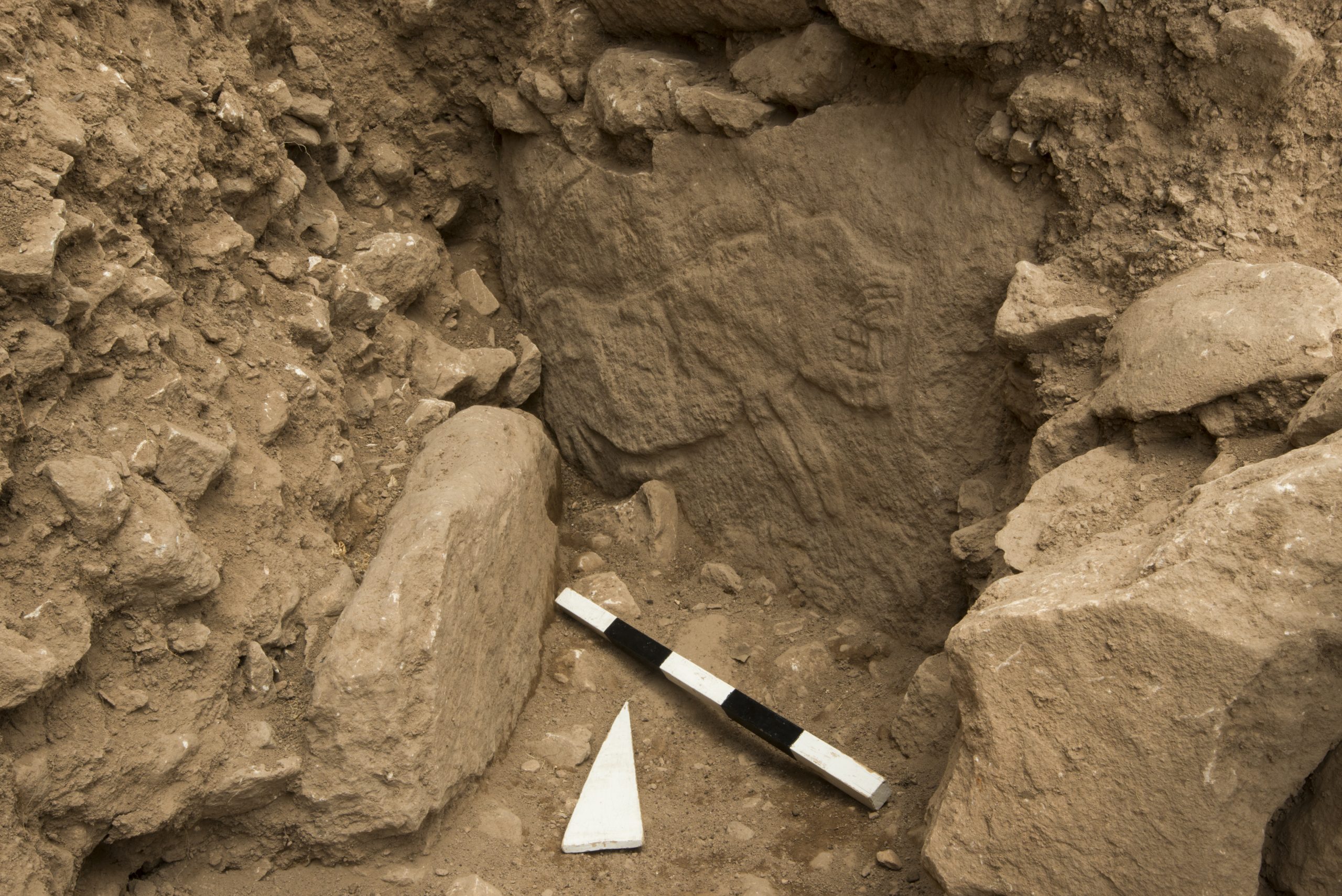 Pillar 69 (Fig. 8) in the northeastern enclosure wall shares the unusual orientation with P66, also standing parallel to the wall. Not completely excavated yet, it shows the relief of a jumping cat of prey on the shaft; the pillar’s head is smashed.

The enclosure wall, which was unearthed in the southern and eastern as well, to some degree, documented in the northern parts, already can give an idea of the dimension of Enclosure H which probably was more of elliptic rather than circular shape and probably had an inner diameter of about 10 m. After a not yet determined period of use, the enclosure was finally backfilled and buried much like this could have been observed with the main excavation area’s enclosures already. However, the excavated southern section of Enclosure H shows very clear that there must have been at least one additional later intervention after this backfilling took place. The alltogether rather ‘chaotic’ discovery situation of the southern enclosure wall, with broken stone benches and pillar fragments obviously not in their original position anymore, gives witness of this intrusion which can be also seen quite clearly in the northern profile of this excavation trench (Fig. 9).

Interestingly, this somehow mirrors a similar situation already met in Enclosure C, where also a later dug pit which only purpose seems to have been locating and breaking the enclosure’s central pillars (whose smashed pieces could be retrieved nearby), for reasons still remaining in the dark as of yet. Another noteworthy feature (which again reminds of the general situation of Enclosure C) is the discovery of some steps apparently forming a stairway in the intersection of two walls in Enclosure H’s southern boundaries. If this really could be interpreted as some kind of entrance situation into the enclosure has to remain topic of future investigations here.