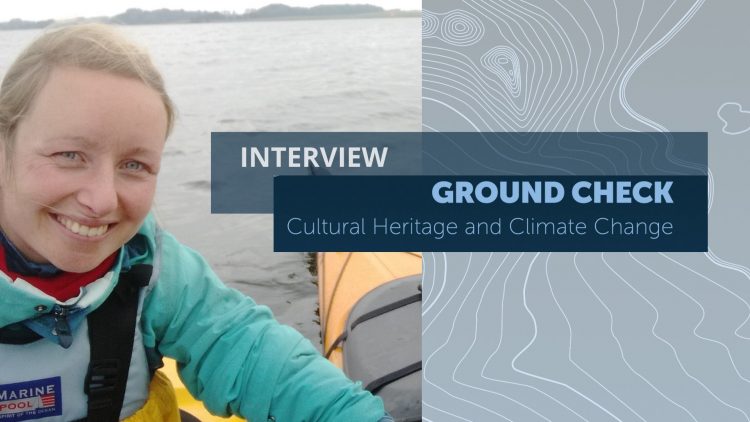 Today the conference „Groundcheck – Cultural Heritage and Climate Change“ in cooperation with the Archaeological Heritage Network was supposed to take place. Although we had to postpone due to #COVID19, we will present some of our remarkable speakers in short interviews.

MS REIMANN, WHICH UNESCO WORLD HERITAGE SITES ARE AT RISK FROM SEA-LEVEL RISE? CAN YOU GIVE EXAMPLES?

In our study we assessed Mediterranean World Heritage sites (WHS) at risk from coastal flooding due to a 100-year storm surge and from coastal erosion until 2100, both under four sea-level rise (SLR) scenarios. Our results show that WHS in the Mediterranean will be increasingly at risk from flooding and erosion in the 21st century, even under low sea-level rise scenarios. The majority of sites at risk until 2100 are already at risk under current conditions.

Regarding flood risk, some of the most extreme conditions can be found in the northern Adriatic Sea, which is home to many UNESCO World Heritage sites. These include, among others, Venice and its Lagoon (ID 394), Ferrara and its Po Delta (ID 733), both located in Italy, and the Cathedral of St James in Sibenik (ID 963), Croatia. According to our results, the sites most at risk from coastal erosion until 2100 include Tyre (ID 299), Lebanon, the Archaeological Ensemble of Tarraco (ID 875), Spain, and Ephesus (ID 1018), Turkey.

HOW COULD COASTAL FLOODING AND EROSION AFFECT THE MEDITERRANEAN WORLD HERITAGE SITES IN THE COMING DECADES?

Both, coastal flooding and erosion, will exacerbate with rising sea levels. Regarding coastal flooding, increases in sea level essentially displace upward the “base” of storm surges and high water levels. In this way, flooding frequency tends to increase as a certain high water level occurs more often, due to the higher sea level. The area that will potentially be flooded as well as the flood depth increase accordingly. In the context of erosion, higher sea levels cause beaches to retreat. Beaches tend to maintain their profile and therefore, with rising sea levels, sand is eroded from the upper beach and deposited on the offshore bottom in order to maintain an equilibrium profile. When the coastline recedes, the distance of the WHS from the coastline gradually decreases, thus increasing erosion risk.

Consequences may vary depending on the location and type of the WHS. Coastal flooding is possibly the more dramatic threat because this hazard hits fast and sometimes unexpectedly, which will certainly threaten structures (such as building, temples, statues etc.). Coastal erosion progresses more slowly, but may also affect structures as well as the characteristics of cultural landscapes such as the Po Delta, which may eventually result in the WHS losing its Outstanding Universal Value (OUV).

HOW CAN ADAPTATION REDUCE THESE RISKS?

Adaptation is urgently needed at WHS to ensure that their OUV is not threatened by SLR. However, adequate adaptation measures for different WHS will depend on the location, the characteristics and the type of the site, so one-for-all solutions do not seem very likely. Further (national- and local-scale) studies need to explore measures suited for each WHS site. Conventional measures (e.g. dikes) are likely to be less suitable as these may compromise the aesthetic value of the site. I would expect that different disciplines need to contribute for designing non-conventional, innovative solutions, e.g. architecture, arts, engineering etc. However, simple accommodation strategies such as removing mobile objects during flood events can be taken. Further, nature-based adaptation measures may hold potential in those locations where enough space is available for such measures.

Due to the high concentration of coastal WHS in the Mediterranean, Mediterranean nations can effectively co-operate to co-develop solutions for WHS. It is important that adaptation to climate-induced SLR for WHS is explicitly addressed in policy instruments, such as the Integrated Coastal Zone Management Protocol for the Mediterranean, as well as in national legislation. Also, if rigorous climate change mitigation is pursued as planned under the Paris Agreement, future increases in flood risk and erosion risk could be kept to a minimum. The iconic nature of WHS can be used to emphasize the severity of their loss in order to raise awareness of policymakers and heritage managers and to promote climate change mitigation. This requires considerable effort, willingness and, first of all, awareness, which we aim to raise with this study.

For more information about the conference „Ground Check – Cultural Heritage and Climate Change“ visit our website.