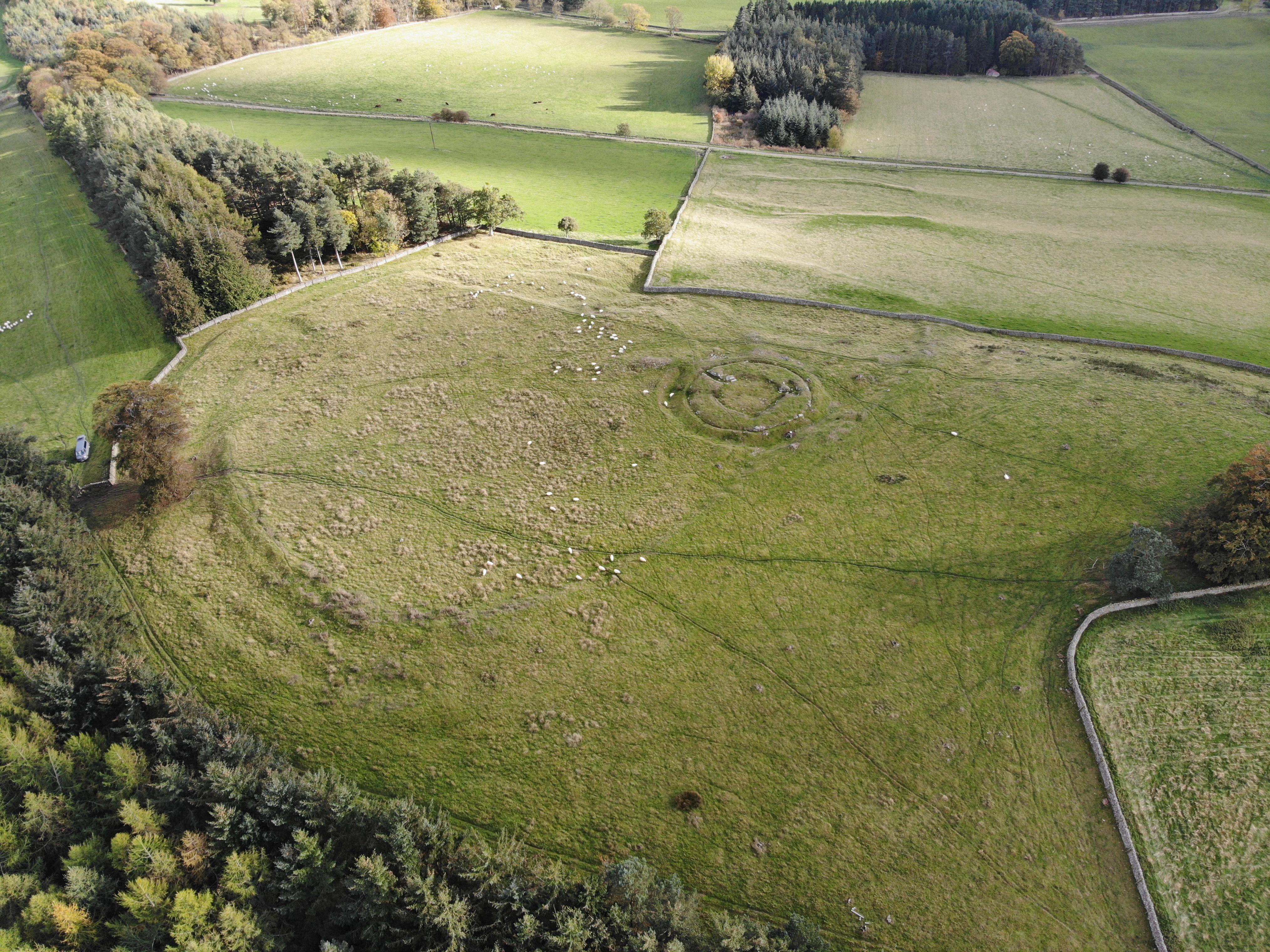 The second part of the South-Scotland survey led us into the county Scottish Borders. Here, close to the town of Melrose lies the site of a Roman fort, and nearby an Iron Age broch – a round-tower built of stone.

The Roman fort at Newstead was named Trimontium by the Romans, obviously referring to the close-by Eildon Hills, a group of three mountains.

There are at least two forts or phases of Roman occupation on the site. The first fort was built in the 1st century AD during the first Roman forays into the North. Its builders were most likely members of the 20th Legion Valeria Vitrix, mentioned in most of the inscriptions detected on the site. A further occupation in the 2nd century AD can clearly be seen on the surface. Parts of the fort and its surrounding annexes have been excavated since the early nineteen hundreds onwards. The new magnetometry gives a good overview of the wider area of the site

The new magnetometry at Newstead – nearly 35 hectares captured in only 2.5 days – provides rich details of the interiors of the fort and its surroundings. In particular, the batteries of furnaces or hearths hints to further workshop and production areas outside the fort. Moreover, a circular  structure consisting of a ditch and inserted posts, might belong to a possible gyrus (horse pen).

Many intriguing structures are captured in the imagery, that is now further investigated. We hope to report on all the details subsequently in this blog.

Trimontium can be compared to the Birrens fort (Blatobulgium) as regards occupation time – from the late 1st century AD to the late 2nd century AD. Moreover, its position North of the Hadrians Wall is a further Nevertheless, the fort at Newstead appears to be larger, as regards outer facilities and it seems to be more pronounced, located west of Dere Street, which we might have caught in our survey.

In Torwoodlee we intended to capture a local settlement site, occupied by an Iron Age hillfort and a broch in its northern edge. Brochs are round towers built of stone build in the north and west of Scotland from the 5th century BC onwards. The broch at Torwoodlee has got the same size as the much better preserved Dun Carloway broch on the Isle of Lewis.

Torwoodlee broch was excavated in 1950. The famous archaeologist Stuart Piggott researched its interior and also found evidence of the hill fort ditch. The Roman objects he secured inside the broch date to the 1st century AD. Ramparts of a possible outer enclosure can still be recognised in the forests on the slope of the hill. Moreover, the communal archaeologist Dr Chris Bowles was hoping to detect an earthwork (dyke) called Catrail in our imagery. The Catrail is supposedly a tribal boundary, that can be followed over long stretches elsewhere. The magnetometry could neither verify these structures nor any clear roundhouse structures inside the hillfort. Nevertheless, some of the ditches surrounding the hillfort show very clearly and we also found two possible round(house?) structures on the western slope.

The strong anomalies inside the forts cannot be explained sufficiently, yet. Dave Cowley from Historic Environment Scotland, who visited us in Newstead, suggested that these might be shelters dug during World War 2 – a lead worth following up on by further investigations.

Our thanks go to James Pringle, who kindly invited us to survey his private property at Torwoodlee. We also thank Dave Cowley, Lukas Banaszek, Deirdre Cameron, Peter MacKeague and James Bruhn from Historic Environment Scotland for all their help and their much-appreciated visit at Newstead.

A severe ‚thank you‘ also goes to Dr John Reid and Robin Edwins! John helped much in the preparation of the research design and the consent proposals. He and Robin also asked for all the landowner consents at our sites in Dumfriesshire and Borders. Robin, moreover, helped with the quad hire and all the movements of the bike between the sites. Without their help as well as the help of Don Reid in Newstead the survey would not have been possible.