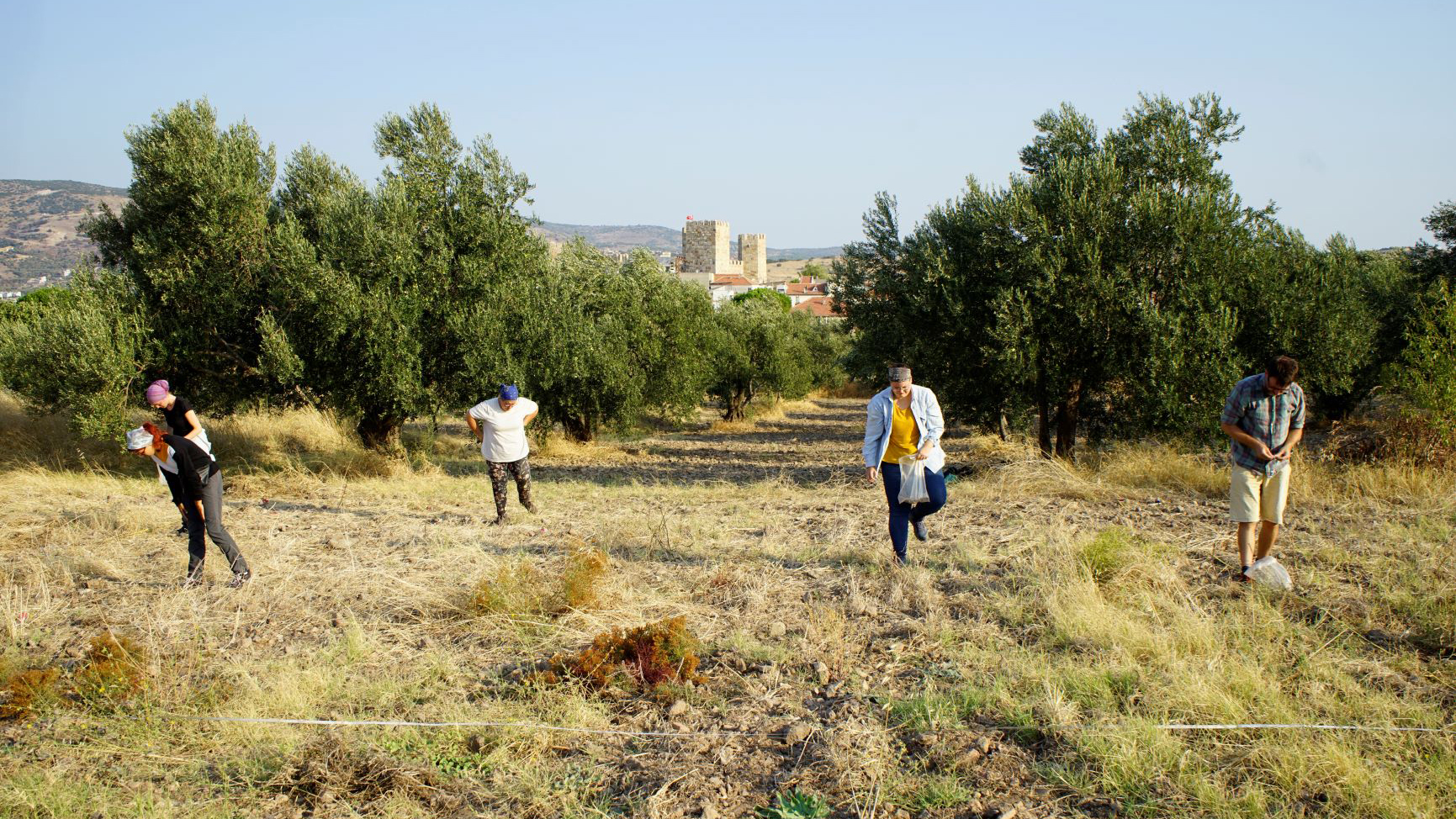 A third component of the wider TransPergMikro Project is an intensive field survey on the Çandarlı peninsula. Within the study of Roman pottery, Çandarlı – ancient Pitane – is known as the very first production centre of terra sigillata that was identified in the Eastern Mediterranean. Terra sigillata is a category of Roman pottery that is characterised by a red surface, which was obtained by applying a slip (a watery clay mixture) onto the vessels. It was an important part of Roman material culture from the middle of the second century BC well into the seventh century AD, and mostly includes any kind of vessel that people would use on their tables for serving and consuming food and drinks: bowls, cups, plates, jugs, etc.

Our team is carrying out an intensive field survey in the central part at Çandarlı, in fields that are partly covered by olive trees. We first count the amount of artefacts on the surface in grids of 10 by 10 metres, after which we collect artefacts that we think are important to better understand the history of the site, and especially artefacts that help us understand the whole production process of pottery.

Making pottery in Roman times was a common business – of course they did not have plastic, and could basically make anything out of clay. For this they needed tools, kilns, as well as buildings or rooms in which they would make their vessels and let them dry. Once clay is fired, it becomes very hard and usually preserves very well. Fortunately for us, many artefacts that were used in these production processes were left behind! Over the past weeks we have collected many such objects, such as many small circular discs – so-called spacer discs – that were used to keep vessels in the kiln separate so the heat and other processes from burning fuel at the bottom of the kiln could reach all parts of the vessels and give them their nice red colour.

Unfortunately for the potters back then, this was not always successful. Temperatures in a kiln could reach 800-900 degrees Celsius, perhaps even more, and some vessels would receive a bit too much heat and began to slowly melt. Perhaps with a bit of imagination we can hear their disappointment when they saw the result after many hours of firing the kiln… After all, these molten vessels (called vessel wasters) could not be sold and had to be thrown away. Let’s say that we should be happy they did, because for us archaeologists this is more perfect evidence that we are dealing with local pottery production.

Back in the excavation house we study the artefacts we collected during the survey. In this way, we try to better understand the technological aspects of pottery production at Çandarlı and the different stages involved, but also see how the site developed over time by determining to which periods the artefacts belong. Based on our first observations we think that pottery was produced at Çandarlı probably for about 4-5 centuries, and if this is true, we wish to understand why it stopped. Or why it began in the first place. For example, from published evidence we know that tablewares that were presumably made at Çandarlı – but certainly in the region of Pergamon – were widely traded around the Aegean during the second and third centuries AD. What made this possible? And is it – or not – accidental that these pottery workshops were located on the coast? It is too early to answer these questions in detail, but our results should help to understand not only the site of Pitane, but also its economic role in the region of Pergamon. In this respect, the new results about pottery production at Çandarlı nicely match those from the Kane Regional Harbours Survey by the Pergamon-Excavation between 2014-18. At Kane, submerged remains of potential Roman harbour buildings were discovered just about 200 metres west of our working area, which indicate the importance of Pitane and its harbour(s) in this period – among others for the export of the locally made tablewares.