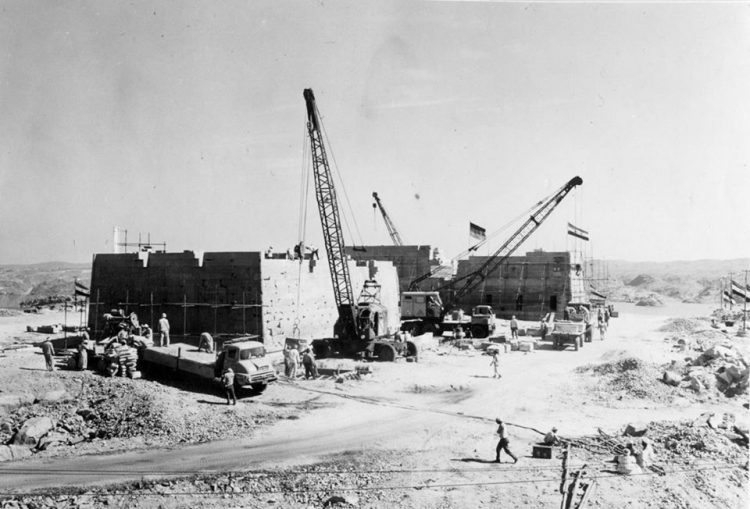 In 1960, the Egyptian government started the erection of the Aswan High Dam. While this building project had many positive effects for the country, it also meant the submersion of many villages and archaeological sites in the Cataract region. The German Archaeological Institute joint the overwhelming international efforts to excavate or to rescue ancient sites from the rising waters. The institute relocated in cooperation with the German construction company Hochtief the Kalabsha temple.

The joint mission’s initial goal was to dismantle the Roman temple dedicated to the Nubian god Mandulis, at its former location, near Bab el-Kalabsha, ca 50 km south of Aswan, and then to re-erect the monument on a newly designated spot, Khor Ingi, about a kilometer north of the High Dam.

The team, mainly comprising workmen and architecture students, worked tirelessly in 10-hour shifts. Every stone had to be recorded in its original position before it could be taken away to the depository area, and finally re-erected in the new space. The work was directed by Australian architect, George Roy Haslam Wright, who had had prior experience with archaeological missions having worked at Jericho, Malta, and Petra, among others. Nonetheless, working mainly from boats in the middle of a lake was a new experience for the entire team. The pressure was immense.

Over six months, the team not only dismantled the temple completely but found blocks carrying Ptolemaic reliefs used as fill in the walls of the temple. These blocks belonged to an earlier building phase; a Ptolemaic sanctuary can now be visited on the southern tip of Elephantine Island, where some of the blocks were reassembled in the 1970s.

While everybody was working, news broke: the levels of the Nile north of the dam would rise higher than anticipated. The hearts of the rescue mission’s team members probably skipped a beat when they first heard this. Luckily, it was quickly determined that the temple’s new location rises high enough so that the water would never reach the main buildings of the temple and the blocks were truly saved. After three years, the temple stood in its new, safe place.

Today, rising from crystal-blue waters the Temple of Kalabsha presides over its new island, now better known by the name of New-Kalabsha. The temple’s new neighbors, including the Ramesside rock-cut temple of Beit el-Wally, the kiosk of Qertassi, and the temple of Dedwen, were relocated there as well.

The German Archaeological Institute Cairo is currently working on making the archival documentation of the relocation accessible to the public.

Learn more about the DAI’s projects and activities in Egypt: